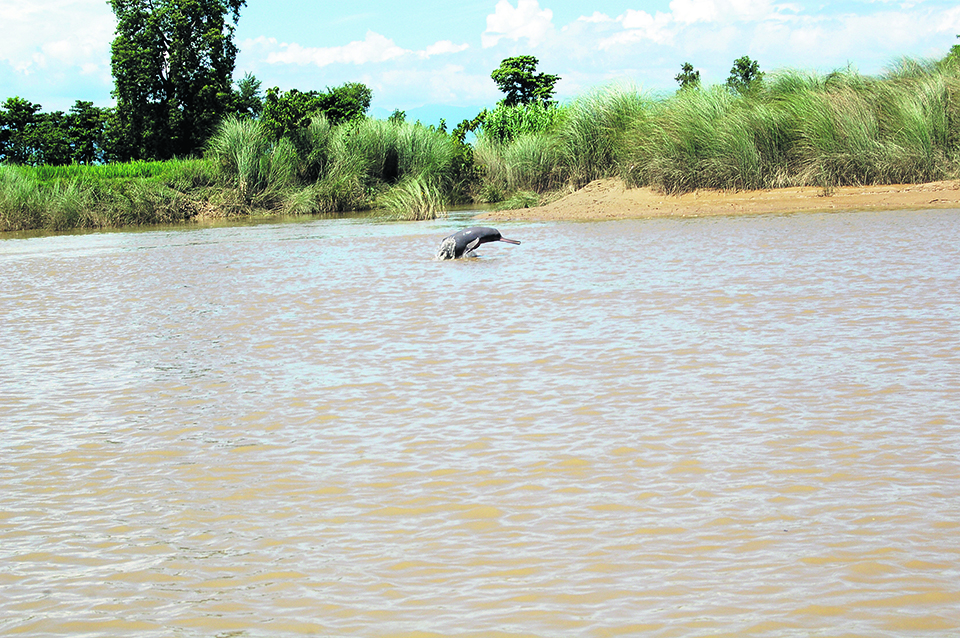 A dolphin seen in the Mohana River in this file photo.

TIKAPUR, July 8: With the level of water rising in the rivers, dolphins have been spotted in the confluence of Mohana and Pathraiya rivers of Tikapur Municipality-7. The locals said they saw the dolphins on Sunday.

In comparison to last year, dolphins were seen quite late this year. According to a local Narendra Regmi, three dolphins were spotted in the river on Sunday, of which two were mature dolphins while one was a baby.

Bijayaraj Shrestha, who has been long studying about dolphins, says this year dolphins were spotted a bit late due to the late arrival of the monsoon.

He added that the presence of baby dolphin is a good sign. Every year, dolphins, which are considered the smartest animal after humans, are easily spotted in Mohana, Pathraiya, Kanda and Kandra rivers from mid-June to mid-August. As per the locals, dolphins can be seen until September if the level of water does not recede.

During other times, the dolphins migrate to the Karnali River and its tributaries. This particular species of dolphin is also found in India, Pakistan and Bangladesh. Dolphin is a carnivorous animal. It feeds on small fishes and Ghongi (fresh water mollusk). It gives birth every year and can deliver up to two babies at a time, say researchers.

The local level started conserving dolphins from 1999. In order to make the campaign effective, one center and 14 sub-centers were built by the local authority. Dolphin conservationists Bhojraj Dhungana informed Republica that three eco clubs and nine dolphin clubs have also been formed to make the campaign more effective.

In 2015 and 2016, census was held for counting the number of dolphins. The team led by Dr Mukesh Kumar Chalise had stated that a total of 107 dolphins were recorded in these four rivers.
Dolphin, an endangered species in the world, is struggling for its survival in Kailali of late. Lack of food, proper habitat, pollution among others have pushed this endangered species on the brink of extinction.

GULMI, Sept 24: The Badighat River Hydro Power Project located at Neta VDC – 2 in Gulmi is yet to... Read More...

LAHAN, July 26: Manoj Yogi of Bardibas, Mahottari who was swept away by the flooded Kamala River has been found... Read More...