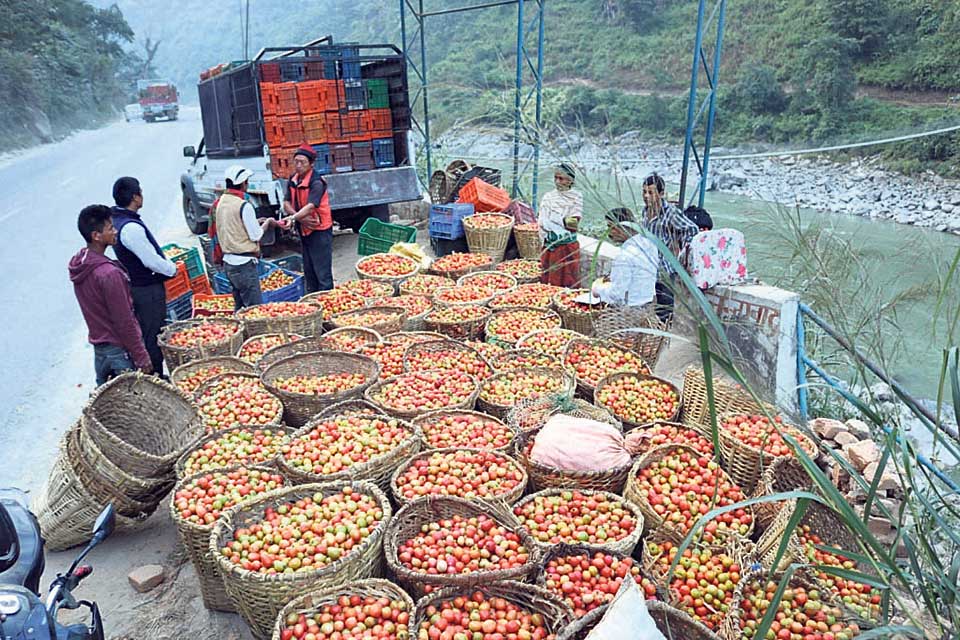 Tomatoes produced in Hiklung and Thumka being brought to Tikrang of Dhading through gravity ropeway on Wednesday. | Photo: Republica

DHADING, Nov 1: There was a time when managing two square meals a day was a challenge for the people of the Chepang community. However, their fortunes have changed for good, thanks to vegetable farming. By cultivating vegetables in the steep and barren lands, these indigenous tribesmen are not just earning meals but are uplifting their living standards.

Devimaya Chepang of Gorkha who recently reached to Tikrang of Benighat Rorang Rural Municipality for selling vegetables stated that vegetable farming has improved her livelihood.

"Earlier, we used to leave the steep land barren. But nowadays, we utilize every piece of land for agriculture," said Devimaya.

In the past, Chepangs earned their living by collecting fodder in jungles and by doing labor. Now, they have been producing around 3 tons of vegetables a day. Devimaya informed that she has been growing tomatoes, beans, cauliflowers and various other seasonal vegetables.

"I have been managing household expenses and also paying fees of my children with the money earned by selling vegetables," she added.

Chepangs have also been practicing 'group farming' of late. There are altogether 94 Chepang households in Hiklung and Thumka of Gandaki Rural Municipality. Farming has been the main occupation for people here. As a part of the Prime Minister Agriculture Modernization Project, farmers here received trainings and technical support earlier. This proved very effective in changing the lives of the Chepang community.

Now, each family has been cultivating vegetables in 3 to 5 ropanis of land. Later, they are sold in the markets of Kathmandu, Pokhara, Narayangadh among others. The construction of Trishuli Bridge in Hiklunghat, which lies in the border of Dhading and Gorkha has hugely benefited the farmers. They do not have to worry about vegetables rotting in the fields in lack of market. They themselves carry the vegetables to the market.

They also use a 612-meter gravity ropeway to carry the vegetables up to Hiklunghat. Bhim Lal Chepang, a teacher in Toman Danda Basic School, informed Republica that the fields, which once used to be covered with millets, are now full of vegetables.

"This has not just improved the living standard of Chepangs but has also added to the enrollment rate of Chepang children in schools," said Bhim Lal.

The exceptionally encouraging results of farming have encouraged the Chepangs. Another farmer Ronal Chepang informed that he has been making Rs 300,000 per year by selling vegetables.

"In the past, foreign employment was the only option for making money. But now, vegetable farming has opened another door for us," said Ronal.

Every day, 6 to 10 tons of vegetables are brought to Hiklunghat from Hiklung and Thumka for selling. This profession has allowed Chepangs to save a little amount in co-operatives, which was never possible in the past.

15 dead, 24 wounded in school shooting in Russia
18 minutes ago