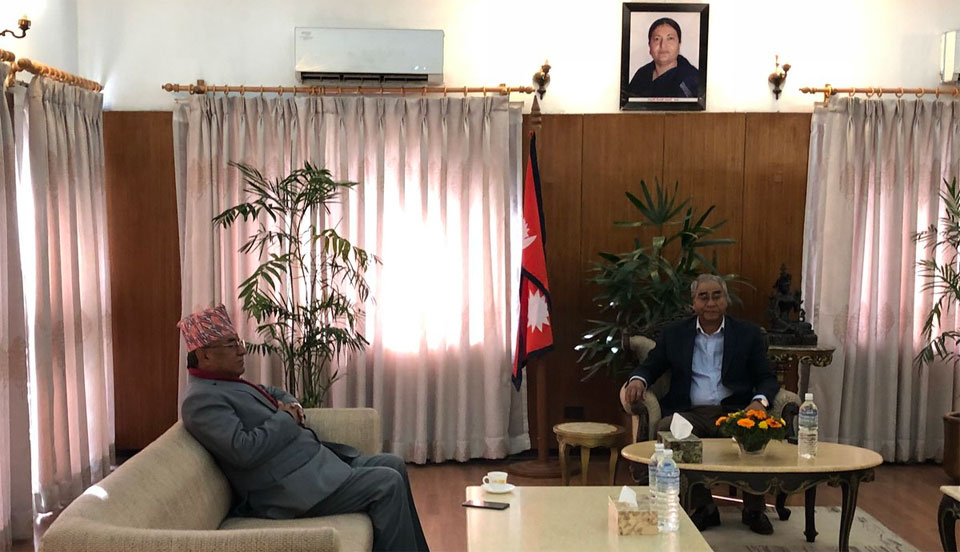 KATHMANDU, Dec 16: Prime Minister Sher Bahadur Deuba has urged CPN     (Maoist Center) chairman Puspa Kamal Dahal to request the President to endorse the National Assembly Election Ordinance. Deuba expressed his views in a meeting with Dahal at the Office of the Prime Minister in Baluwatar today.

The Ordinance is awaiting the President Bidhya Devi Bhandari’s authentication at the Office of the President.

Following the election results, Deuba shared that he has eager to handover to new government as soon as possible. However, formation of a new government has been delayed as the Ordinance is yet to be authenticated by the President.

“Dahal said that he’d consult with CPN-UML and come to conclusion about recommendations to push for authentication,” Govinda Pariyar, press coordinator of PM Deuba said.

During the meeting, Deuba congratulated Dahal for the victory of Left Alliance in the elections of the House of Representatives and State Assemblies.

As Deuba’s government was only a caretaker, Dahal flagged his concerns on the appointments that the outgoing government was taking, Manahari Timilsina, press aide of Dahal said.

During the meeting, Dahal urged Deuba to bring major political parties onboard to find a way out for the National Assembly elections.

Admitting defeat, Thapa says: I condemn the interference of Nirmal Niwas
1 hour ago