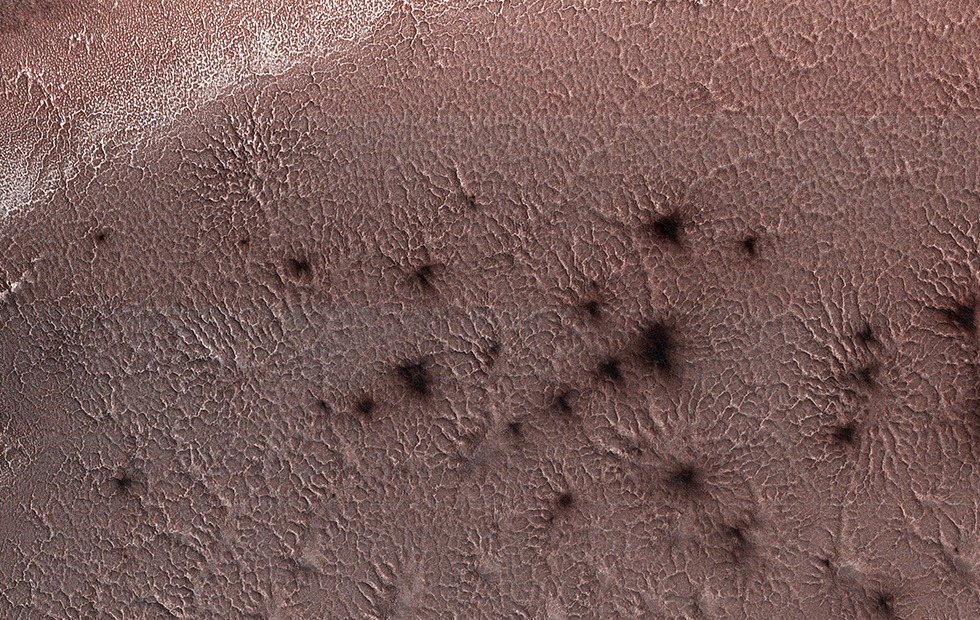 NASA has released an image showing “spiders” on Mars, small darks spots on the reddish landscape with tendrils one could easily perceive as tiny legs. The marks were captured by the NASA

Mars Reconnaissance Orbiter in mid-May at Mars’ south pole during the planet’s winter season. The “spiders” make their appearance as the season turns to spring, dotting the terrain.

Of course, the dark marks shown in the image above aren’t spiders — they’re not even living creatures. Rather, these are marks on the land called “araneiform terrain,” a type of mound that appears to radiate outward with tendrils. These spots form in areas where carbon dioxide ice under the surface gets warm and then releases gas.

Researchers explain that Mars experiences an active seasonal process that isn’t seen on Earth. As the carbon dioxide ice under the surface warms, the gas forms but is still trapped under the planet’s surface. Pressure slowly builds, at some point becoming pressurized enough to punch through the ice.

A jet of gas results in a dust eruption; the darker spots are dark dust that can form around the places where the gas vents. Wind, says NASA, may also blow dust that can form the “legs” we see on the “spiders.” Researchers explain that the features are etched into the Red Planet’s surface, leaving a fun visual imprint for researchers to examine.