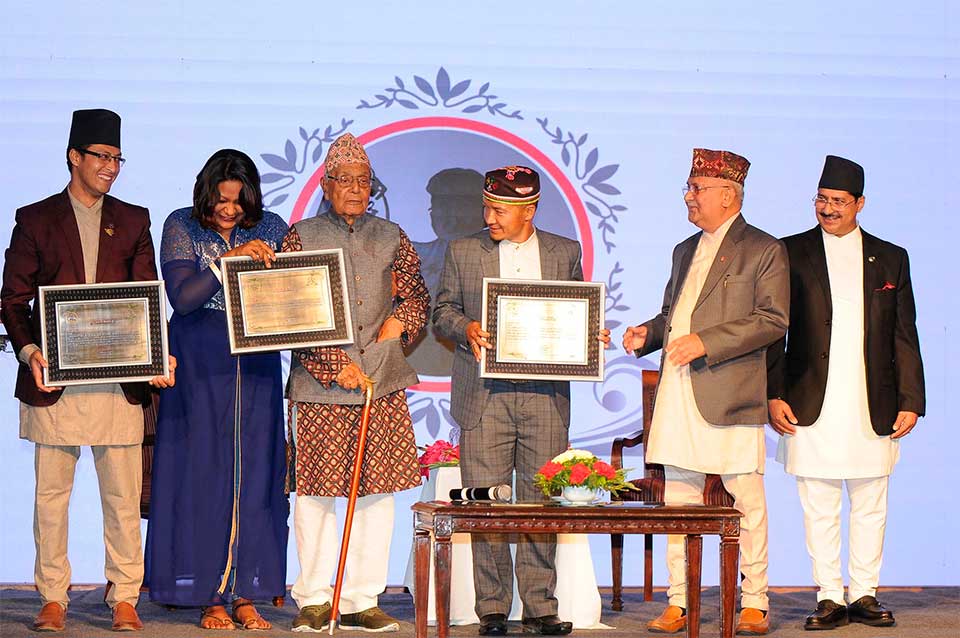 Amid a special function organized to mark the commencement of 10th year of NRM on Tuesday, Prime Minister KP Sharma Oli and NRM Chairman and Managing Director Binod Raj Gyawali felicitated Srijung Shah and his spouse Rudra Kumari, Dinesh Tamang and Binod Shahi. They were honored for their selfless and remarkable contributions to society.

Srijung Shah, 93, and his wife Rudra Kumari have announced to donate their land in Kathmandu worth over Rs 1 billion posthumously to Nepalgunj-based Fateh Bal Eye Hospital. The hospital founded by Srijung’s parents has been reeling under financial crisis of late. The couple was honored for their philanthropic deeds.

Similarly, 36-year-old Binod Shahi was felicitated for his contribution in educating poor children in Upper Dolpa. It has already been 13 years since he established his relations with Upper Dolpo as a volunteer teacher. His benevolent act in the region has helped transform lives of many people. Shahi was among the 50 candidates nominated globally from among 50,000 teachers this year for Varkey Global Teacher Prize.

Likewise, Dinesh Tamang was awarded for providing shelter to dozens of quake victims. Tamang, who was little known to the locals of Dhading before the devastating earthquake of April 2015, became a celebrity after he successfully reconstructed on his own 55 houses destroyed by the quake . He developed a model village in Jwalamukhi Rural Municipality of the district, making the entire settlement earthquake-resilient at a time when several thousands of quake survivors were struggling to rebuild their houses.

“I hope that my philanthropic deeds will inspire many others in the country to follow suit,” Srijung said while interacting with editor of Nagarik Daily, sister publication of Republica, before receiving the honor of Nagarik Nayak.

Shahi, another receipt of the Nagarik Nayak award, said that he became hero as other people were not even doing doable jobs. “All my efforts are for supporting the government’s campaign to ensure every child’s right to education,” he said.

Likewise, Tamang said that he would continue his efforts to rehabilitate earthquake-affected people living in risky settlements. After constructing 55 houses for quake victims on his own, Tamang plans to build at least 100 more houses for homeless victims.

Addressing the program after the felicitation of Nagarik Nayaks of 2074, Executive Director of NRM Sambridhi Gyawali thanked the three heroes for their selfless contribution to society. “Today is a proud day for us not only because we have reached 10 years of providing service to the nation but also because we have three Nagarik Nayaks amongst us, two of whom are 36 year olds working in Dolpa and Dhading for a cause with no signs of entitlement or expectation,” she said.

“Nagarik Network is our digital platform that will start its broadcast with eight shows a day from May 14. As all of our products, this product will also come to the market with highest standard of quality content but in audio/visual format,” she said.

Minister Shrestha announces not to take government facilities
6 hours ago