KATHMANDU, April 25: Nepal Republic Media (NRM) Pvt Ltd honored four exemplary personalities as Nagarik Nayak (Nagarik Heroes) of the Year 2074 for their selfless and inspiring work. They were honored amid a special function organized at Hotel Soaltee Kathmandu on the occasion of NRM’s eighth anniversary.

Nagarik Nayak Pasang Sherpa, aka Lama Seru (79), was recognized for his three decades of efforts in widening trails in the Khumbu region for saving lives of human and cattle that tread on them. Nagarik Nayak duo Dhurmus-Suntali, recognized for their efforts in building settlements for quake victims and Musahars, on the occasion announced plans to build a mini Nepal by building settlement for poor families from seventy-five districts while accepting the honor. Similarly, Nagarik Nayak Phul Kumari Yonjan Shrestha of Siraha was honored for her contributions to empowerment of women through the Buddha Mahila Cooperative in the district.

NRM Chairman and Managing Director Binod Raj Gyawali and NRM Director Shova Gyawali felicitated the four Nagarik heroes with certificates and tokens of love. Speaking on the occasion, Dr Govinda KC, Nagarik Hero 2010, has said that the trend of honoring individuals for their exemplary contribution to the society established by NRM is appreciative. Similarly, Former Finance Secretary Rameshore Khanal said even if we honor one percent good people for their exemplary work, it will inspire the younger generation.

NRM Director Shova Gyawali said that NRM has started the tradition of honoring civilian heroes to set an example that good works are always appreciated. She also said that all the media run by NRM would focus on highlighting civilian heroes and representing people’s voices. On the occasion NRM also honored five journalists and staffers associated with it with best performance award on Monday. The awardees include Republica Desk Chief Dilip Dhakal, Jhapa district correspondent Raju Adhikari, Designer Arbinda Man Singh, Shyam Acharya from Finance Department and Bishnu Ram Ghimire from Marketing Department. 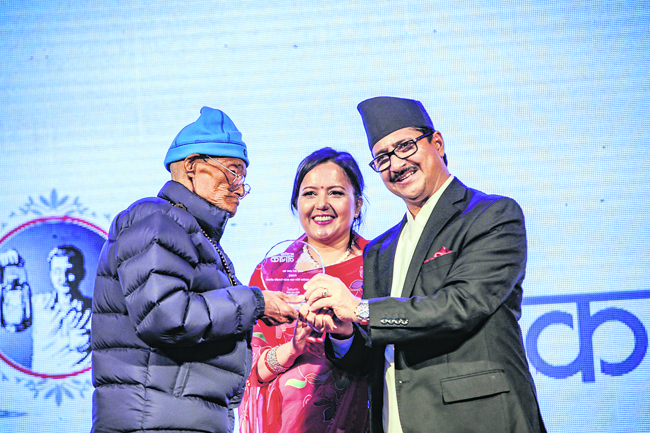 KATHMANDU, March 13: Nemish Gautam, a journalist from Nagarik daily, has been admitted in the hospital after an accident. ... Read More...