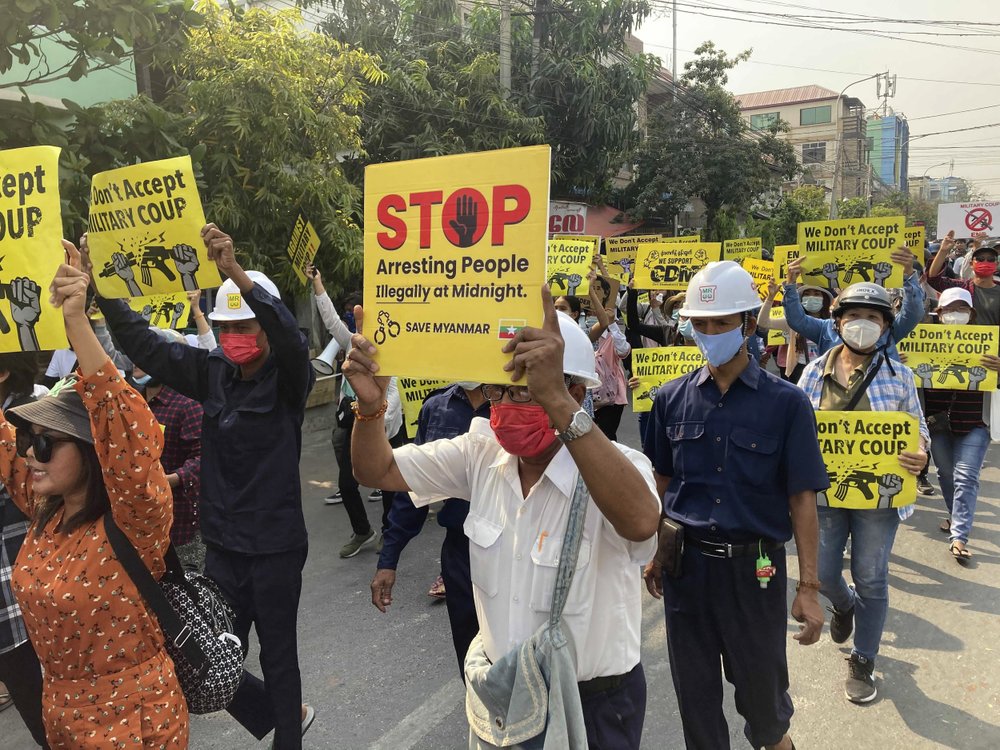 YANGON, MYANMAR, March 15: Myanmar’s ruling junta has declared martial law in six townships in the country’s largest city, as security forces killed dozens of protesters over the weekend in an increasingly lethal crackdown on resistance to last month’s military coup.

State broadcaster MRTV said Monday that the Yangon townships of North Dagon, South Dagon, Dagon Seikkan and North Okkalapa have been put under martial law. An initial announcement was made late Sunday saying two other townships — Hlaing Thar Yar and neighboring Shwepyitha — were being placed under martial law.

At least 38 people were killed Sunday and dozens were injured in one of the deadliest days of the crackdown on anti-coup protesters, according to the Assistance Association for Political Prisoners, or AAPP, an independent group tracking the toll of the violence. Several estimates from other sources gave higher figures.

Complicating efforts to organize new protests as well as media coverage of the crisis, mobile internet service has been cut, though access is still available through fixed broadband connections.

Mobile data service has been used to stream live video coverage of protests, often showing security forces attacking demonstrators. It had been turned off only from 1 a.m. to 9 a.m. for several weeks, with no official explanation.

The blockage of internet service forced postponement of a court hearing in the capital, Natpyitaw, for Myanmar’s detained leader, Aung San Suu Kyi, who was supposed to take part via a video conference, said her lawyer Khin Maung Zaw. Suu Kyi and President Win Myint were detained during the Feb. 1 military takeover, and have been charged with several criminal offenses that their supporters believe are politically motivated to keep them locked up.

Since the takeover six weeks ago, Myanmar has been under a nationwide state of emergency, with its civilian leaders ousted and detained, and military leaders in charge of all government. But Sunday’s announcement was the first use of martial law since the coup and suggested more direct military control of security, instead of local police.

The announcement said that the State Administrative Council acted to enhance security and restore law and order, and that the Yangon regional commander has been entrusted with administrative, judicial and military powers in the area under his command. The orders cover six of Yangon’s 33 townships, all of which suffered major violence in recent days.

Thirty-four of the deaths were in Yangon. Video from Hlaing Thar Yar township showed people running away after gunfire was heard at nighttime. Those fleeing carried one injured person and tried to revive two others, one who seemed to be dead or dying, the footage from independent Democratic Voice of Burma showed.

Hlaing Thar Yar was the location of 22 civilian deaths Sunday, according to the AAPP, which said more than a dozen civilians were wounded and described a large number of junta forces engaged in the township.

Four other deaths were reported in the cities of Bago, Mandalay, and Hpakant, according to the AAPP and local media.

In a new tactic, anti-coup demonstrators used the cover of darkness to hold mass candlelight vigils in various parts of Yangon over the weekend, including some that took place after 8 p.m., when a curfew imposed by authorities starts.

The protest movement has been grounded in nonviolent civil disobedience from the start, with marches and general strikes among its main features. But some protesters have advocated stronger, more agile methods of self-defense — such as holding small rallies that are quick to disband and reunite, and devising cover from fire extinguishers, billowing laundry and burning tires.

The AAPP’s tally of Sunday’s victims raised the number of civilians killed by security forces since the coup to over 100. Confirmation of the number of casualties is nearly impossible due to the security situation and a crackdown on independent media in Myanmar, but various groups have compiled tallies with similar figures.

The actual death toll is likely higher, as police apparently have seized some bodies, and some victims have had serious gunshot wounds that medical staff at makeshift clinics would be hard-pressed to treat. Many hospitals are occupied by security forces, and as a result are boycotted by medical personnel and shunned by protesters.

Police have also aggressively patrolled residential neighborhoods at night, firing into the air and setting off stun grenades as an intimidation tactic. They have also taken people from their homes in targeted raids with minimal resistance. In at least two known cases, the detainees died in custody within hours of being hauled away.

20 ‘unlucky’ candidates who lost HoR election even after securing 30,000 plus votes
19 hours ago
Import of EVs crosses 1,000 units during mid-July to mid-November
20 hours ago

Govt should create jobs for Nepalis within Nepal: Minister Kunwar
55 minutes ago

Badri Pandey of NC wins in Bajura
2 hours ago

CPN-UML's Bharat KC wins in Dolakha B
3 hours ago