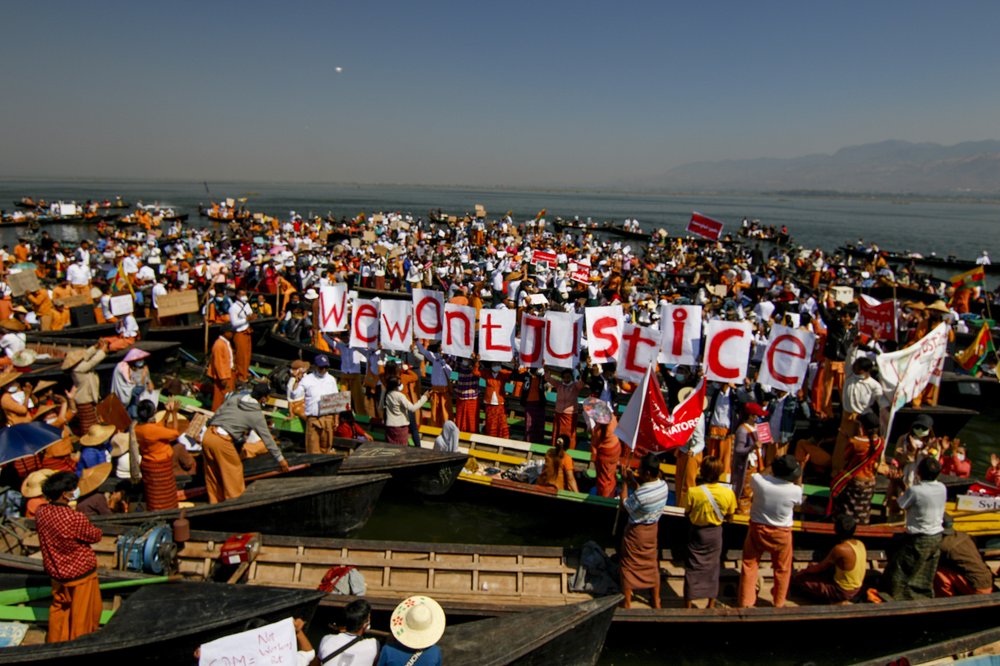 Ethnic Entha community display placards during a protest against the military coup in Inle Lake, Taunggyi, Myanmar, Thursday, Feb. 11, 2021. Large crowds demonstrating against the military takeover in Myanmar again defied a ban on protests Thursday, even after security forces ratcheted up the use of force against them and raided the headquarters of the political party of ousted leader Aung San Suu Kyi a day earlier. (AP Photo/Aung Ko San)

YANGON, MYANMAR, Feb 11: Members of Myanmar’s ethnic minorities marched through streets in traditional dress and floated on wooden long boats in a scenic lake Thursday to protest last week’s coup, a sign of the broad and growing resistance to the military takeover.

Opposition to the coup received a major boost from abroad from U.S. President Joe Biden, who ordered new sanctions and promised more measures to come as he demanded the junta hand power back to the elected government. That’s part of a growing trend, as more governments consider sanctions against the military.

The military seized power on Feb. 1, ousting leader Aung San Suu Kyi and preventing recently elected lawmakers from opening a new session of Parliament — a shocking reversal after about a decade of progress towards democracy in Myanmar. The junta said it was forced to step in because Suu Kyi’s government failed to properly investigate allegations of fraud in recent elections, though the election commission has said there is no evidence to support those claims.

In response to the coup, tens of thousands of protesters have marched daily in Yangon and Mandalay, the country’s biggest cities — and the demonstrations have spread throughout the country, showing depth of the resistance. The rallies have drawn people from all walks of life, despite an official ban on gatherings of more than five people. Factory workers and civil servants, students and teachers, medical personnel and people from LGBTQ communities, Buddhist monks and Catholic clergy have all come out in force.

On Thursday, people from Myanmar’s ethnic minority groups, who are concentrated in far-flung, border states, joined in — a striking show of unity in a country where some groups have resented the Burman majority’s control and have also had their differences with Suu Kyi. But their deep mistrust of the military, which has brutally repressed their armed struggles for more autonomy, has made them uneasy allies with her party.

“Our people have been oppressed by the junta for many years. They have cracked down brutally. How long are they going to keep doing this?” asked protester Naw Ohn Hla, a human rights activist from the Karen ethnic group, at a demonstration in Yangon. “But the people understand the situation, and most of them are joining now.”

There have also been reports of police officers who belong to the Kayah ethnic group risking their jobs to protest the takeover. In a video shot Wednesday in a small village in the eastern state of Kayah, 42 police officers could be seen standing together to declare their support for the protesters and refuse entreaties from a senior officer to return to duty. Residents streamed to the scene to protect the defiant officers from arrest.

In Myanmar’s eastern Shan State, home to the country’s largest ethnic minority group, scores of wooden long boats used for fishing and transportation on scenic Inle Lake hosted a unique floating protest, with passengers holding placards denouncing the coup and calling for justice. Some protesters squeezed messages lengthwise onto oars, including “Respect Our Votes” and “Say No to Coup.”

Large rallies have also taken place in the capital, Naypyitaw — which is unusual since the planned city has a large military presence. On Thursday, in the southern city of Dawei, protesters stamped and wiped their feet on a poster of Senior Gen. Min Aung Hlaing, the much-scorned coup leader who now heads the ruling junta.

Hundreds of protesters also gathered outside the Chinese Embassy to criticize what they said was Beijing’s failure to condemn the military takeover. They held signs, many in English and Mandarin, with slogans such as, “Reject the Coup, Shame on you China” and “Dear Chinese Government, Don’t Stay Muted. This is not Zoom meeting.”

About 200 politicians and activists have been arrested since the coup, according to the independent Assistance Association for Political Prisoners.

More senior members of Suu Kyi’s National League for Democracy party, along with other politicians and activists, were arrested Wednesday night.

So far, police have sprayed water cannons and shot rubber bullet and live rounds in the air in an attempt to disperse crowds. In the past, though, the military has not hesitated to employ force in big cities. It ruled directly for five decades after a 1962 coup, and used lethal force to quash a massive 1988 uprising and a 2007 revolt led by Buddhist monks.

International sanctions were employed by Western governments in reaction to those crackdowns, but they were eased when elections in 2010 and 2015 showed the country’s tentative steps toward democracy.

At the White House on Wednesday, Biden said he was issuing an executive order that will prevent Myanmar’s generals from accessing $1 billion in assets in the United States.

It remains to be seen what, if any, impact the U.S. action will have on Myanmar’s military regime. Many of the military leaders are already under sanctions because of attacks against the Muslim Rohingya minority.

What we saw at Teku Hospital (photo feature)
23 hours ago
Oppn parties fail to secure majority seats in parliament to form new govt, Oli likely to be reappointed as new PM
20 hours ago

IPO of CEDB Hydropower allotted, lucky 234,195 investors get 10 units each
2 hours ago