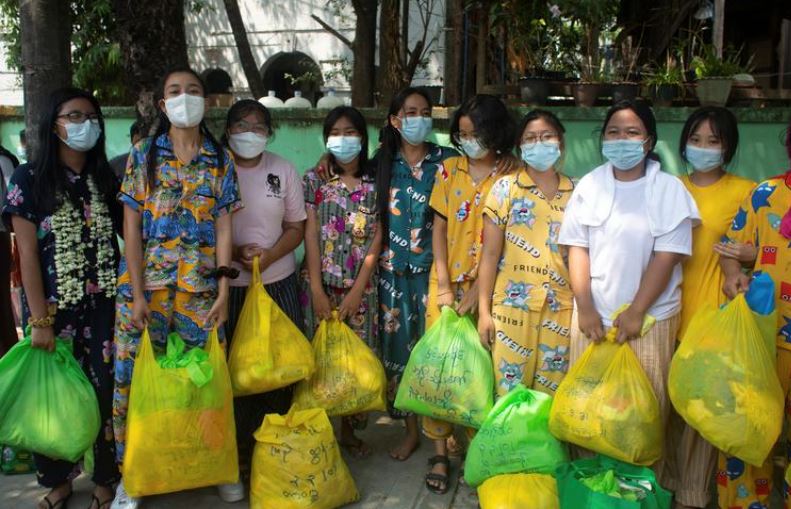 Protesters detained by police during the anti-coup demonstrations pose after being released at Tamwe township police station in Yangon, Myanmar, March 24, 2021. REUTERS/Stringer

MYANMAR, March 24: Myanmar’s junta freed hundreds of demonstrators on Wednesday arrested during its months-long crackdown on protests, while businesses in Yangon were shut and streets deserted in response to a call by anti-coup activists for a silent strike.

Several buses full of prisoners drove out of Yangon’s Insein jail in the morning, said witnesses, who included lawyers for some inmates. There was no immediate word from authorities on how many prisoners were freed. A spokesman for the military did not answer calls.

“All the released are the ones arrested due to the protests, as well as night arrests or those who were out to buy something,” said a member of a legal advisory group who said he saw around 15 buses leaving.

In the biggest city Yangon, a call by pro-democracy activists for a silent strike turned the streets eerily quiet.

“No going out, no shops, no working. All shut down. Just for one day,” Nobel Aung, an illustrator and activist, told Reuters.

“The usual meat and vegetables vendors on the street didn’t show up,” said a resident of the city’s Mayangone district. “No car noises, only birds.”

A teacher in the Kyauktada district said the roads were deserted: “There aren’t many people in the streets, only water delivery men.”

Activists have called for a “big protest” on Thursday.

“The strongest storm comes after the silence,” Ei Thinzar Maung, one of the protest leaders, said in a post on Facebook.

The Assistance Association for Political Prisoners (AAPP) activist group says at least 2,000 people have been arrested in the military crackdown on the protests against the Feb. 1 coup.

Among those freed on Wednesday, was Thein Zaw, a journalist for The Associated Press who was arrested last month, AP reported, quoting him as saying the judge had dropped the charges because he was doing his job at the time of his arrest.

Wednesday’s strike came a day after staff at a funeral service in Mandalay told Reuters that a seven-year-old girl had died of bullet wounds in the city - the youngest of about 275 people killed in the bloody crackdown, according to the AAPP.

Soldiers shot at her father but hit the girl who was sitting on his lap inside their home, her sister told the Myanmar Now media outlet. Two men were also killed in the district, it said.

The military had no immediate comment on the incident.

The Myanmar office of the United Nations children’s agency said “the continuing use of force against children, including the use of live ammunition, by security forces is taking a devastating toll on children in Myanmar.”

Since the crisis started at least 23 children have been killed and at least 11 others seriously injured, UNICEF said.

The junta has faced international condemnation for staging the coup that halted Myanmar’s slow transition to democracy and for its lethal suppression of the protests that followed.

It has tried to justify the takeover by saying a Nov. 8 election won by Aung San Suu Kyi’s National League for Democracy (NLD) was fraudulent - an accusation the electoral commission has rejected. Military leaders have promised a new election but have not set a date and have declared a state of emergency.

Opponents of military rule have regularly called for strikes and parts of the economy have been paralysed by a civil disobedience campaign, including among civil servants.

Suu Kyi, who won the Nobel Peace Prize in 1991 for her campaign to bring democratic civilian rule to Myanmar, has been in detention since the coup and faces charges that her lawyer says have been cooked up to discredit her.

The ousted leader was due to appear for another court hearing via video conferencing on Wednesday, but the head of her legal team Khin Maung Zaw said it had been postponed until April 1, marking the second successive delay due to internet issues.