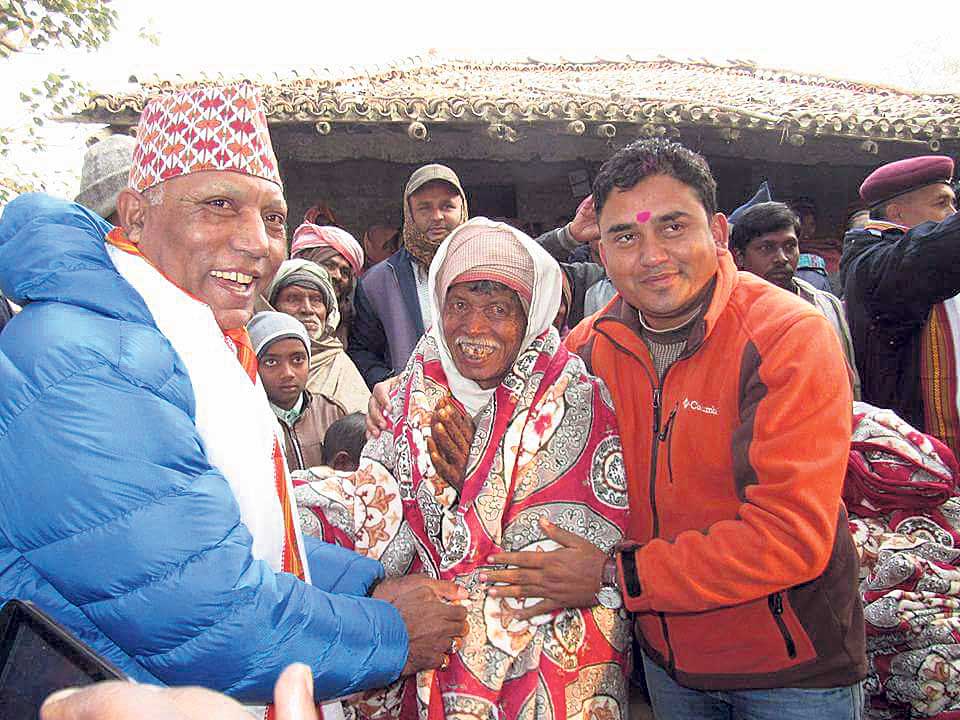 MAHOTTARI, Jan 11: The area belongs neither to Nepal nor to India. Around 70 small huts are seen Nepal side of the border and similar huts can be seen on the other side. Residents living in these huts on the Nepal side belong to the Mushahar community (who fed on mouse for survival). The area is near to Manasisnera Municipality - 9.

The Mushahars claim to be Nepali but none of them have citizenship certificate to prove it. The statelessness has deprived them of all the state facilities that they would be entitled as citizens. This poor community has no other story to share then their constant struggles for survival.

On top of that, they are chased away, harassed, thrashed and their huts destroyed by the Seema Suraksha Bal (SSB) of India for occupying the no man's land. These constant fears and the state of being stateless, they wonder which country they belong to and if they have the right to life.

“Our huts leak both during the monsoon and the winter seasons. In rainy season, the rain comes in and in winter its cold dew that shivers our whole family,” said Ratiya Devi Sada. “We do not know how to get out of this vicious circle of poverty and give a better life to our children,” she added.

It is not that the Mushahars sit idle at home, doing nothing. They actually work hard, but for the landlords.  Whatever they earn from such stints, it just caters to their survival, leaving them without any savings. “Saving is an alien concept for it. Neither do we have any idea about it nor can we afford to make any,” says Sada.

Many generations have passed but the Mushahars never owned land. Lack of land always plotted the same fate of misery and poverty for all their generations. “Since long we have worked in others' land. It seems that we are destined to not have our own land,” she stated.

One of the biggest reasons why Mushahars have not been able to get free of the clutches of poverty is their dependency on landlords for fulfilling their needs, especially their festival and medical needs. During festivals or special occasion, many members of this community take loan from landlords. But because of exorbitant interest rates, they are never able to get rid of it. They simply keep paying off interest. “We are always paying off the interest. That hardly gets over. Debts like these always keep us poor. We have to keep paying them for years and years,” Sada shared.

Apart from the festival, they loans taken for medical treatment have forced them into long-term loans. “Medicines and doctors are so expensive that poor people like us cannot afford it. Because of that we have to loan from our landlords. As we cannot pay the loan right away, we have to work almost our whole life to pay the debt,” she lamented.

She stated that some men from the community have even gone to Punjab and other states of India for employment. But, even those families have not been able to get rid of their landlord's debt. Mushahar men mostly work in India for six month and remain at home for rest of the year working in their landlord's farms. They identify themselves as Nepalese and lament that the India SSB destroy their huts time and again. “Though we don't own this land, we have been living on this land from ages. But the SSB wants us gone from here,” Sada explains.

The area these Mushahars are living in is called Bathahana village. According to Fekan Sada from the village, Mushahars have been ignored just because they are poor and innocent. Despite huge political changes in the country, they never received due attention from any of the political parties, he complained.

Though no structures are supposed to constructed on the no man's land, authorities have never question the Mushahars for constructing huts there. Sudip Jha, member of District Coordination Committee, said that the government should manage their settlement. “The government should be addressing their problems. In lack of it they are forced to live like orphans,” Jha said. “We need to bring some concrete plan for their welfare.”

Chief District Officer of Mahottari, Baburam Shrestha stated that he was aware of the Mushahars' plight on the no man's land “It is a very serious issue. I am going to discuss about it with stakeholders,” he said.

The Dhurmus Suntali foundation on Wednesday distributed warm blankets to Mushahars in the no man's land at Bathanaha village near Manasisnera Municipality - 9. Around 200 Mushahars belonging to 70 families received blankets from the chairperson of the foundation Sitaram Kattel (Dhurmus). CDO Shrestha was also present at the occasion.

BANKE, May 10:  As India is constructing an embankment like road next to the no man's land, locals living across the... Read More...

No man's land turning into a cowshed

KOHALPUR, Jan 28: One thing that comes to our minds when we talk about international borders is tight security. However, the... Read More...