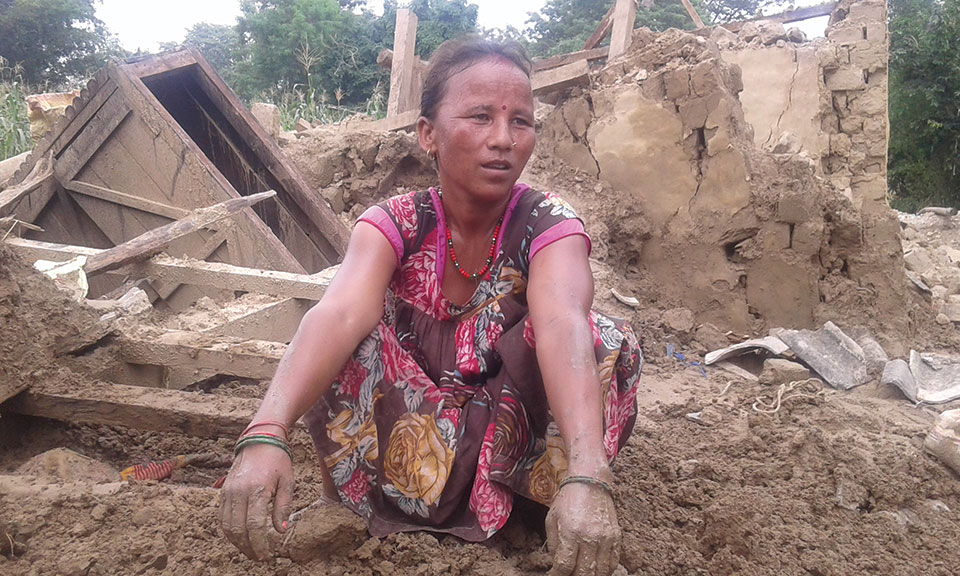 NEPALGUNJ, July 10: henever there is rainfall, the heartbeat of Durga Prasad Pandey of Khalla Jhagadiya in Phattepur increases and he starts praying. Rapti River which flows to the south of his house and the floods in various rivulets in the north often displace him and his family every year.

With the onset of monsoon, the fear of getting displaced and losing life has started haunting him. "A drop of rain can speed our heartbeat. We can't sleep until the rain stops," said Pandey. With the objective of protecting the village from floods, the local government had started the construction of an embankment which has been left halfway. This, according to the locals, has increased the risk further.

The infrastructures damaged by the flood of last year are yet to be reconstructed. This has developed a fear among the locals that they might have to witness worse flood this year. Laxmanpur dam and Kalkalawa embankment which have been illegally constructed by the Indian government just across the border inundate dozens of villages in Nepal including Phattepur. In fact, this is the village which is most affected by the flood.

According to Ramlakhan Tharu, ward chief of Phattepur, the risk of flood is high this year due to the under-construction embankment. "Infrastructures damaged by last year's flood are not yet repaired and the construction of an embankment is left halfway. So, the risk is more this year," said Tharu.

In order to reduce casualties, people living in flood-prone areas have been urged to shift to safer places at least for the next two months. "Even a minor flood can cause more damage this year," said ward chief Tharu. The incessant rainfall witnessed few days ago had increased Rapti's water level to a great extent. This has stolen the sleep of the locals living nearby the river.

According to locals, they wouldn't have had to suffer so much during monsoon had the government constructed a concrete embankment along the Rapti River.

RAJBIRAJ, March 11: The monsoon is around the corner and locals in Rajbiraj who are living in the settlements near Khado... Read More...