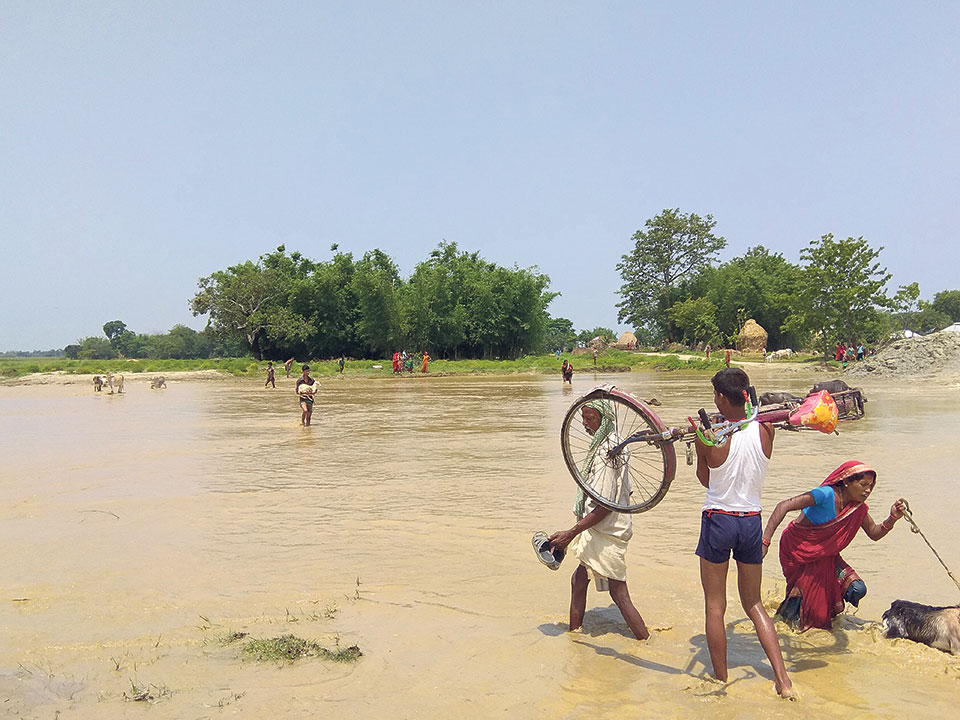 Locals of Barmajhiya of Kanchanrup Municipality-3 in Saptari district affected by Friday night’s flood carry their belongings to safer location on Saturday. Floods is common in this Dalit settlement but this time the locals said they were taken by surprise by the flood much before monsoon. Photo: Jitendra Kumar Jha/Republica

SAPTARI, May 20: The monsoon is still a month away. However, even before its onset, settlements across the country are being inundated by floods.

Around 50 households of the settlement, which is occupied by people of Ram (Chamar) and Sadaya (Musahar) communities, have been affected by the untimely floods.

“We had not imagined that floods would affect us this soon,” said Manjur Sadaya, one of the victims. “But in the morning, the floods entered our settlement without warning, leaving us speechless.”

The inundation is due to the government’s severe negligence to repair the damaged embankment along the river. According to Jageshwar Sadaya, another victim, the floods of last year had caused damages to eight embankments to the river’s eastern and western sides.

Locals of the Dalit settlement vented their ire on the government. Stating that they do not have any efficient leader, they said their voices have been largely suppressed and ignored.

“We can neither influence politics nor have access to administration of our own local body,” said Durga Ram. “There is none to hear our voice. While politicians makes us big promises during their need, our problem of floods have not changed.”

Another local, Baiju Goithiya, shared that they have approached the local administration multiple times to address the issue. “However, some officials say they do not have budget for it while others state that they could not allocate budget for the task. All of these only increase our plight,” he sighed.

The flood on Saturday not just entered the Dalit settlement but also destroyed agricultural yields belonging to farmers of nearby settlements. Vegetables and crops have been destroyed, robbing the poor farmers of their means of income.

NEPALGUNJ, July 10: henever there is rainfall, the heartbeat of Durga Prasad Pandey of Khalla Jhagadiya in Phattepur increases and he... Read More...