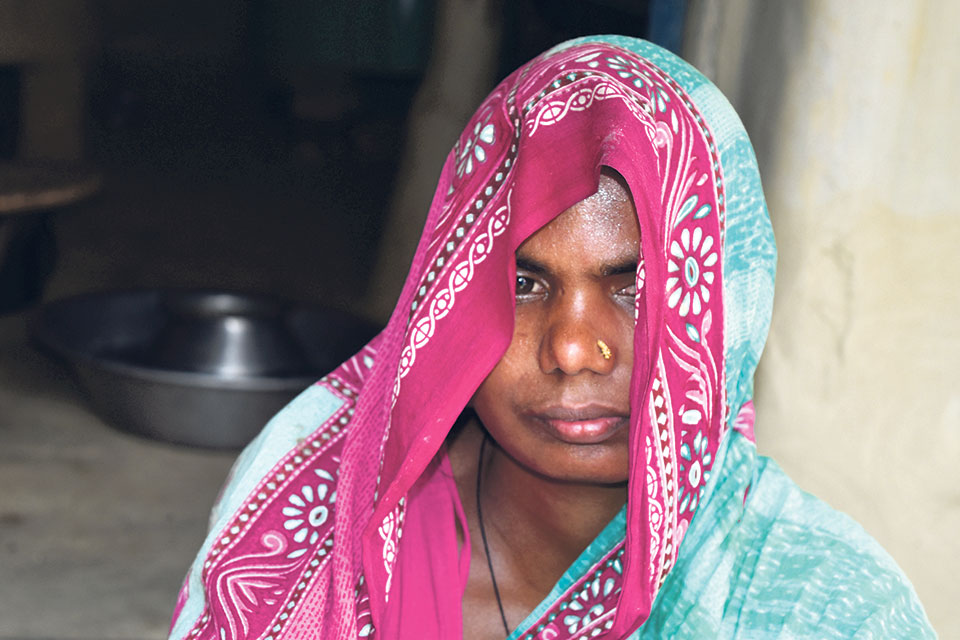 SIRAHA, May 24: On 25 October, 2016, an expecting mother Rambatti Devi of Aurahi village of Siraha was rushed to Lila Madan Polyclinic following excessive bleeding. After keeping her for observation for three days, the doctors said she and the baby in her womb are in good condition.

The clinic discharged her saying that it is completely safe to get back home. The hospital charged a total of Rs 13,000 for the treatment. Apart from this, the family paid extra expenses for food and accommodation as well as other services.

However, a week after returning home, she begun to bleed again. She was again taken to the same hospital. After a thorough check up, the doctors declared that the baby had already died inside her womb.

“They told me my baby is no more alive. And I had to undergo another operation,” Rambatti lamented.

And the cost of this operation left her numb. Doctors told her to submit Rs 40,000.

It was hard to collect the amount. But the family somehow managed it. She was discharged after three days. But the polyclinic showed her a bill of Rs 60,000.

The family was already upset for losing the baby. They got enraged after they were asked to pay extra charge in addition to the already high charge. However, they were helpless. They cleared the bill and left.

“ The doctors said that the baby had died before reaching the hospital. Then, they operated her demanding such huge amount,” lamented the patient’s husband Lalbabu. “In the name of asset, all we have is a three-aana land and a house. We are very poor people,” he added.

Even after taking his wife home, the expenses did not lessen. She started showing health complications, which the family doubts, is due to the ‘wrong’ treatment by the doctors.

“After the surgery, we indeed came back home, but problems kept following us. Her health did not improve. We do not know the exact reason, but it feels that the operation they did was not executed properly,” Lalbabu said.

The family was already in debt by then. So taking Rambatti to a better hospital was not possible. But they kept on raising voice for investigation into the case. They wanted the doctors to give proper explanation.

“We are uneducated people. We raised voice against the hospital but could not do anything more. But we are still fighting for justice. Maybe, doing this will help many other poor people like us,” Lalbabu said.

Meanwhile, Rambatti openly charged the polyclinic of ‘playing with her health’. “They not only cheated poor people like us but left us penniless. This operation has also left me ‘disabled’ for lifetime,” she fumed.

Before surgery, Rambatti had a robust health. Now, she has several health complications. “They must have done something wrong with me,” she said.

The family even took the matter to the health ministry and other government officials later, through local leaders.

“We want the government to monitor their activities, and if found guilty, they must be booked and given due punishment,” urged Rambatti.

According to Umesh Karna, chief of Health Administration Division of District Public Health Office, the case had caught his attention. Investigation was carried out and it was found that the polyclinic was indeed siphoning off hefty amount from unsuspecting patients.

“For some time, the polyclinic was even shut. However, it is now again in operation,” he said.
Staff at the office state that the polyclinic owner has connection with ‘powerful circle’. “So it came into operation again,” they said.

Karna states that the polyclinic is operating illegally. It has not renewed its license.
“It has been providing several types of health services illegally. The polyclinic does not have the license to do so,” Karna said.

Karna admits that there are several medical centers, pharmacies, clinics in the district that are operating in the same way. Even government hospitals have not met the right criteria, he said.
“We do have Acts, provisions, which need to be followed. But in the lack of monitoring, private institutions are largely breaching the laws. And even government-run institutions are not able to meet the standard,” Karna noted.

There are 54 registered health centers including polyclinics, medicare centers and clinics in the district. And they are not allowed to carry out surgery. However, these centers are providing such services as per their whim. According to Karna, things won’t improve until and unless the government can provide best health service from government-run health centers.

He added that illegally operating health service centers will be booked. “We are going to gather information and take action against them,” he said.

Meanwhile, the owner of Lila Madan Polyclinic, Manoj Shah, sounded cool when he said he is running the clinic as ‘nobody has stopped him’. “If they issue some letter to stop it, I will obey it,” he said.

SIRAHA, May 24: On 25 October 2016, an expecting mother Rambatti Devi of Aurahi village of Siraha was rushed to Lila... Read More...