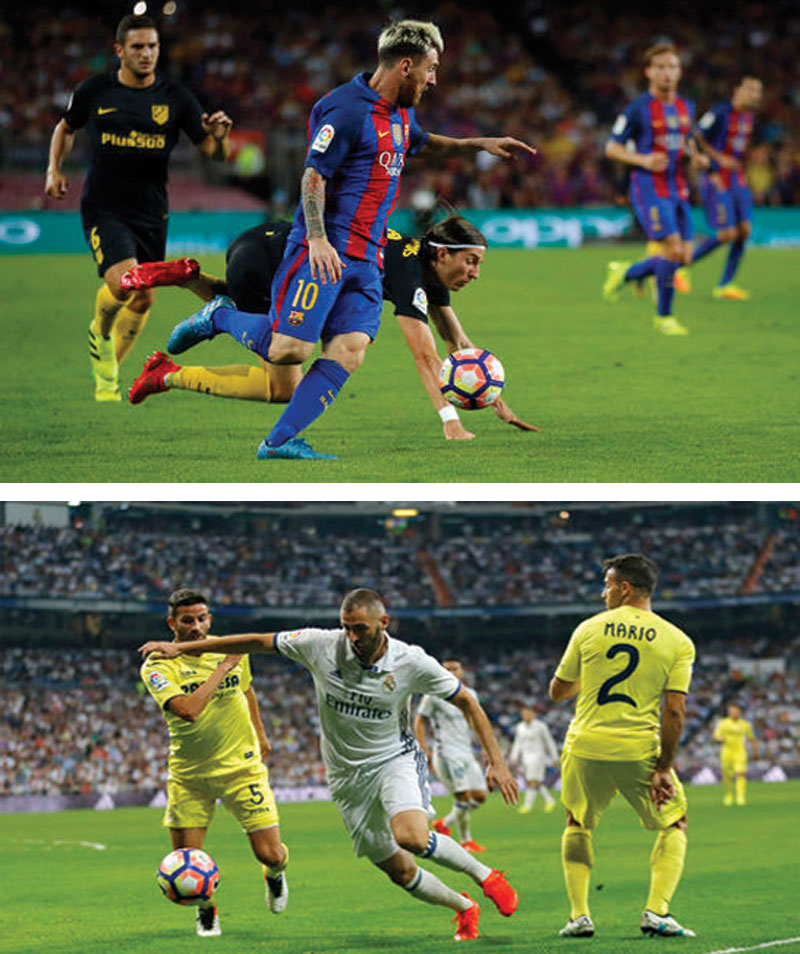 BARCELONA, Sept 22: Barcelona lost Lionel Messi to injury and a chance to beat a title rival on Wednesday, when it was held to a 1-1 draw by Atletico Madrid in the Spanish league.

Messi gingerly walked off the Camp Nou pitch in the 58th minute, just moments before Atletico substitutes Angel Correa and Fernando Torres went on and linked up to equalize.

The defending champions said Messi will be sidelined for three weeks with a groin strain.

"With Leo Messi out, football loses, we all lose," Barcelona coach Luis Enrique said. "We now have to look for different solutions. Of course we are stronger with Messi, but we are still strong enough."

The night couldn't have started better for Barcelona, after seeing Real Madrid's hopes of breaking its Spanish league record for consecutive wins dashed by a 1-1 draw with Villarreal.

Barcelona was in control after Ivan Rakitic broke through Atletico's staunch defense in the 41st with a header from Andres Iniesta's cross.

But the match quickly changed course when Messi came up lame following a sprint to fight for a ball with Diego Godin.

The Argentina star grimaced as he touched his right thigh. After walking gingerly for a few minutes, he sat on the turf, pulled out his shin guards and unlaced his boots.

Arda Turan hastily warmed up and rushed on to replace him.

Sensing an opportunity to transform the game, Atletico coach Diego Simeone sent on Torres and Correa.

The move immediately paid off when they caught Barcelona napping after a foul. Torres' glancing touch of a pass left Correa clear to rifle a low shot off the post and into the net in the 61st.

Simeone said that the goal coming on the heels of Messi's exit was "coincidence, pure coincidence."

"The key to the match was the change we made at the start of the second half," Simeone said. "We defended very well throughout, but in the second half we were able to be protagonists as well."

Neymar tried to lead Barcelona in Messi's absence, while Godin drew a save from goalkeeper Marc-Andre ter Stegen in the final minutes.

Real Madrid was aiming to break Barcelona's league record of 16 straight wins set in 2010-11. Adding to its strong finish to last season, Madrid had won the first four rounds and tied Barcelona's milestone by beating Espanyol on Sunday.

Sergio Ramos featured in both goals at Santiago Bernabeu Stadium.

The Madrid defender helped Villarreal go in front in the first-half stoppage time when he blocked Manuel Trigueros' shot with his arm, setting up Bruno Soriano to score the penalty.

Ramos made amends three minutes after the restart when he leapt higher than two defenders to head Madrid level.

Neither Cristiano Ronaldo nor Gareth Bale looked at their sharpest after both Madrid forwards were rested against Espanyol.

Bale was substituted with 20 minutes left, and Ronaldo wasted a chance to secure a late win when he shot into the arms of goalkeeper Sergio Asenjo.

Madrid lost left back Marcelo to an undisclosed injury in the first half when he walked off the pitch.

"I am happy with my players," coach Zinedine Zidane said. "I'm not going to talk about records. We are going to rest and think about the next match."

Hugo Mallo put Celta ahead in the 66th before Duje Cop equalized with a spot kick of his own.