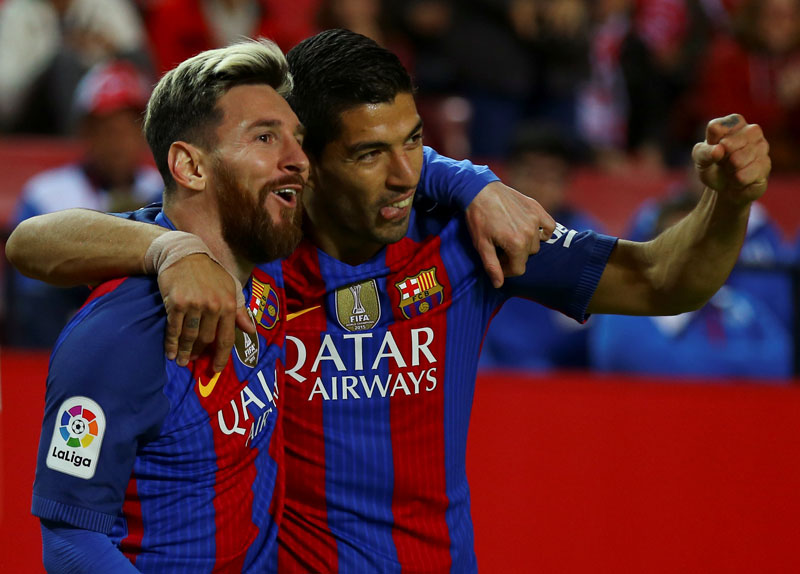 SEVILLE, Nov 7: The day before his side hosted Barcelona, Sevilla coach Jorge Sampaoli joked that Lionel Messi's supremacy necessitated two Ballon d'Or competitions, "one for Messi and one for everyone else".

The Argentine's words rang true as his compatriot turned Sunday's thrilling encounter with the high-flying Andalusians on its head, engineering a 2-1 comeback victory for his side despite a breathtaking display from Sevilla.

Barca looked there for the taking after Vitolo's 15th minute goal and were drowning in the home side's unrelenting pressure, only spared by some wayward finishing.

But as halftime approached, Messi sparked a surge forward, combining with Denis Suarez and Neymar to equalise with Barca's first clear effort on goal.

The 29-year-old took hold of proceedings in the second half, crafting two unfulfilled chances for himself before teeing up Luis Suarez to secure Barca the winner.

Sevilla, for all their early confidence, had no response.

"When a player like him takes a game seriously it's very difficult for his opponents," said Sampaoli, whose side's perfect home record in La Liga and the Champions League was broken.

"Messi is a world class player and when the game opens up there's little you can do to stop him, nor his team mates because they can really punish you if you give them any space."

Barca coach Luis Enrique praised the little magician for yet another match-winning display.

"Messi's capacity to interpret any situation is remarkable. There's no-one like him. Our aim is to look to give the ball to him as often as we can," he said.

Sevilla's Vitolo added: "I'm not going to tell you anything new about Messi, for me he's the best of all time.

"He only appeared in the first half to score the goal but in the second he improved his whole team. We were on top in the first half but Barca's front three can score at any moment and their first goal got them back into the game."

Sevilla president Pepe Castro lamented his side's inability to finish Barcelona off but was also in thrall to Messi.

"We couldn't take our chances in the first half. They have Messi, we do not," he said.

"He is an extraterrestrial. The first time he touches the ball, it's a goal."

Experts' conclusion: Air accidents increased due to lack of full compliance with ICAO standards
13 minutes ago