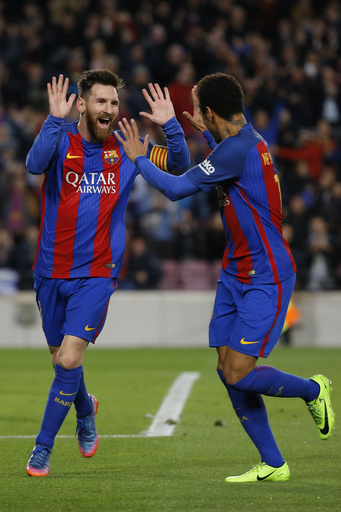 The flashes of brilliance from Barcelona's best may give pause to anyone who thinks Paris Saint-Germain's 4-0 cushion is surely insurmountable come Wednesday in the second leg of their Champions League round-of-16 tie.

The intimidating display also comes in the first match since coach Luis Enrique announced he would leave the club at the end of the season.

"It didn't serve as a warm-up for PSG as far as how they play, but confidence is basic in these types of situations," Luis Enrique said.

Besides two goals, Messi also contributed to setting up second-half strikes by Ivan Rakitic and Samuel Umtiti, dealing a stinging win to a good Celta side which has beaten Barcelona and Real Madrid this season.

"We always trust in our coach and his staff," Rakitic said about the team's response to Luis Enrique's departure.

"Hopefully we can pull off a miracle and turn around the result to stay alive in the Champions League."

Messi had already hit the post before he opened the scoring at Camp Nou with a masterful solo effort.

He received the ball near midfield with Celta apparently positioned to keep him in check. But he curled around his marker, sped toward the goal, cut back around a second man, and finished it off with a vicious left-footed strike.

Messi then assisted Neymar by threading a precise pass to meet his strike partner's run into the box, where Neymar added his own exquisite touch by popping the ball into a perfect tight arc over the helpless 'keeper.

Messi got another great goal in the second half when he ghosted around two Celta players before firing between the legs of the second one.

Messi's goals took his league-leading tally to 23, including 14 in his last 12 league matches. They were also his 37th and 38th goal in as many appearances this season.

Both strikers contributed to Rakitic's score. After passing for Umtiti to get his first goal for Barcelona, Messi capped the victory before adding some flourishes in late attacks that went close to producing even more goals.

Barcelona stayed one point ahead of Madrid, which has a game in hand.

Karim Benzema broke his eight-round scoring drought with two goals, stepping up with Cristiano Ronaldo out because of an unspecified physical problem and Gareth Bale serving the first of a two-game suspension.

Madrid also got goals from the little-used James Rodriguez and Marco Asensio to get a convincing win after three poor showings allowed Barcelona to tighten the title race.

"During a season there are moments that you have to suffer, sometimes you play a bit poorly, but that is normal over a season. Today we got back to playing well from the very start, playing with intensity," Madrid coach Zinedine Zidane said. "This is a good sign for us."

Before the season, the match at the small Basque club would not have been considered a priority for Madrid. But with its stars out, the team struggling, and Eibar playing well at home, the visit looked a challenging one for Madrid.

Benzema finished off his own rebound in the 14th and added a second goal in the 25th from Rodriguez's free kick.

Benzema returned the assist for Rodriguez five minutes later before Asensio and Eibar's Ruben Pena scored in the second half.

Goals by Roberto Soriano and Cedric Bakambu in each half gave Villarreal a win to stay in sixth place.

Leganes earned a second straight home win thanks to a late goal by Darwin Machis, who is playing at the promoted club on loan from Granada.