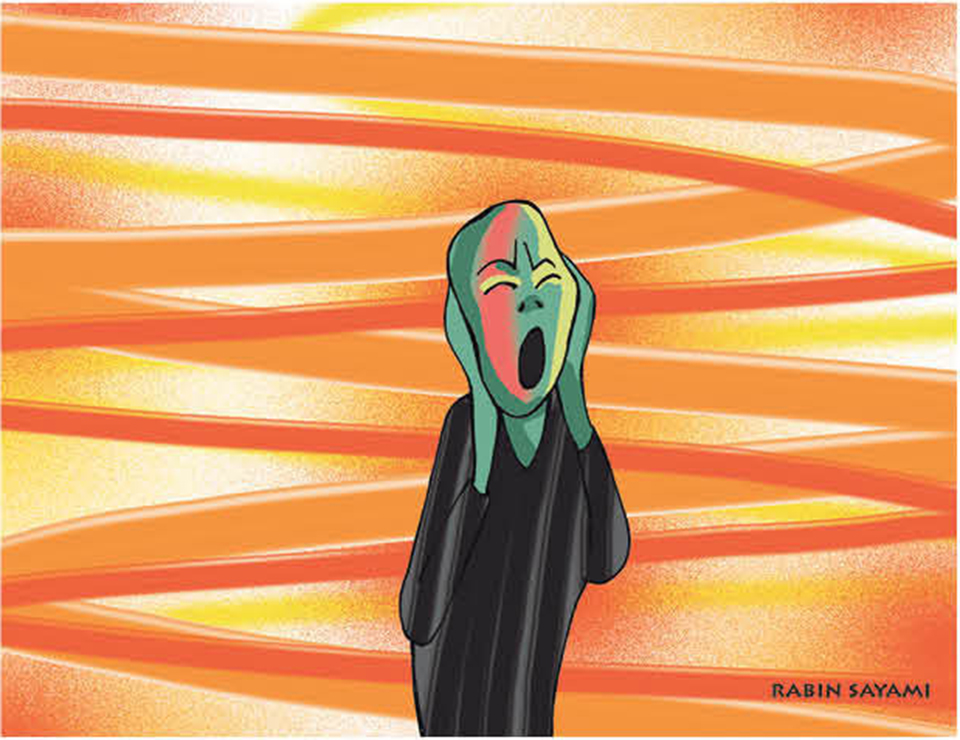 “Let there be no night

Let there come no dream

Dreams of my own death

After she posted the above stanza on her Facebook wall a year ago, friends reacted with encouraging comments, asking her to keep writing such beautiful verses. But some who knew her better were not happy. One of them called her up, and they met. Shortly before that Facebook post, Lalita (name changed for privacy) had posted something more somber: "I am fed up with life and may be death is calling me."

It was a relationship issue that was bothering her. The relationship had come to an end after a decade. The breakup was a mutual decision. However, life now felt meaningless to the 28-year-old. "Now and then, I felt like the seashore and waves of emotion would come crashing in. I really did not want to live any longer."

Words like psychosis, schizophrenia and depression are not alien to Nepali society. But these have yet to take hold. Mental health issues are becoming increasingly common as people struggle to keep up with today's pace of life. However, they are not yet ready to open up, -- Jagannath Lamichhane, an activist working in mental health sector in Nepal

Lalita has not fully recovered from her ordeal yet, but she has not sought any clinical help. She lives in the heart of Kathmandu where such help is not far-fetched. "That friend of mine saved my life then. She talked to me about lots of good things and it all felt a little lighter," she says. "But even now there are times when I feel profoundly unhappy inside."

Samjhana, 25, in Bhojpur was a normal enough young woman for all intents and purposes. She also had a toddler. But then she began to show some abnormalities . She would tell her sisters that she needed to be kept away from her child, or else she might do something horrible. "An evil force is upon him; I might do anything if he is not banished out of sight," she would warn her sisters repeatedly. On May 28, news spread that she had chopped up the three-year-old in cold blood. Her sisters, who later appeared on YouTube video, also spoke of some evil force, and how it had been bothering her since a long time. But they could never have dreamt that it would play out in such horrendous fashion.

Words like psychosis, schizophrenia and depression are not alien to Nepali society. But these have yet to take hold. Mental health issues are becoming increasingly common as people struggle to keep up with today's pace of life. However, they are not yet ready to open up, says Jagannath Lamichhane, an activist working on mental health sector in Nepal. "The vocabulary of mental ill heath is off-putting," he says.

Lamichhane, who was awarded by the World Health Organization in 2015 for “Outstanding achievement in the field of Mental Health Care”, states that delay in recognizing mental health issues and openly discussing and addressing the problem will only make matters worse.

Last month, Lamichhane launched his Juggernaut mindset, a digital platform where mental health issues are discussed and people can seek help. Much to his surprise, in less than 30 days nearly 100 people, including a large number of teenagers, sent in messages. Showing screenshots of a few of the private chats, he said that students from secondary and even lower secondary levels are suffering from severe mental stress. "This is just a ninth grader who wants to quit this world."

Family problems, relationship issues, competition and a sense of worthlessness, economic hardship and many other crises brought those people close to Lamichhane. "The lack of any outlet for such tensions often leads to depression. And when this festers, it can get dangerous," he said, speaking from some personal experience of his own.

Senior psychologist Karuna Kunwar thinks we are already late in fashioning a national mental health policy. "We don't yet have any clear policy on mental health. There is no budget, planning or program. People affected are left to cope on their own and it is the children who are short-changed most," she notes.

Parents come to her when their children do poorly in school. Otherwise they would not come, she says. "It is only academic excellence parents want, but here are several mental health issues their kids are burdened with," she adds.

According to a WHO report, a patient with mental health issues in a developing country suffers much more than someone in the developed world. Lack of facilities and awareness and passive acceptance make it harder to deal with panic attacks and depression. In 2016, suicide was the second leading cause of death worldwide among people between ages 16 to 25.

Nepal Police, in a report of its own around three months back, said at least 7,144 people committed suicide across the country in just 16 months. And 57 percent of them were aged 16 to 35.

"Mental issues are behind the rise in domestic violence . If there are no serious and sustained interventions, crime is bound to rise dramatically," warns DSP Narendra Kunwar, the police chief in Panchthar who has been investigating the recent Miklajung multiple murders. "People have become more aggressive and intolerant, especially the younger generation."

According to Dr Saroj Ojha, a senior psychiatrist at TU Teaching Hospital, mental health issues are indeed becoming common. "People are a little more aware than before, but a lot more needs to be done," he says.

Renowned spiritual Guru Jaggi Basudev of south India, who has millions of followers worldwide, wants people to 'handle their intelligence humanly'. "Humans are highly intelligent creatures. When their own intelligence turns against their well-being, their mind makes them suffer. Humans have to open up to the bigger dimensions of life for both mental and physical health of oneself and others," he suggests.

February is observed as National Iodine Month with an aim of creating awareness among people regarding consumption of iodized salt... Read More...