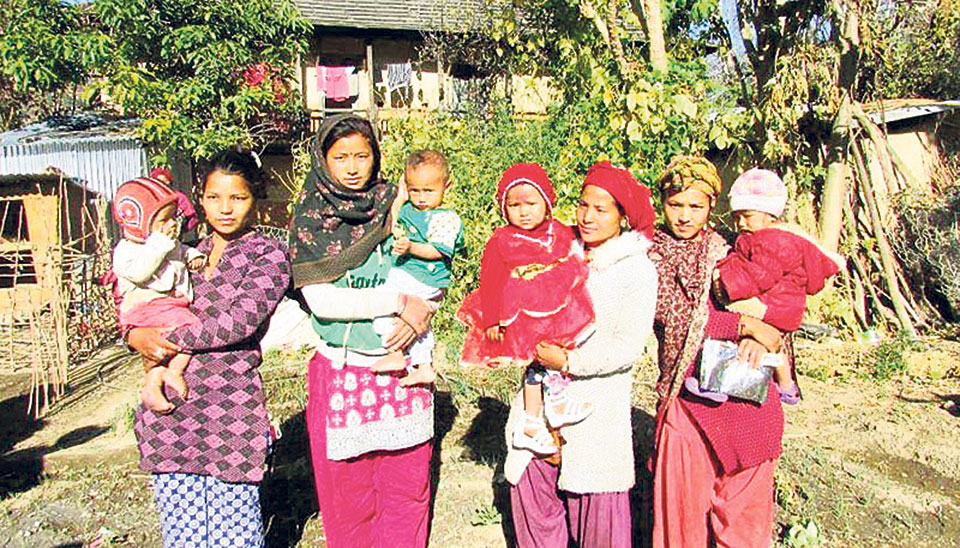 A group of mothers along with their infants stand outside a maternity clinic in Rukum district in this file photo. Photo: Republica Files

RUKUM, April 10: Parbati Khadka of Western Rukum got married at the age of 14. That quite excited her for a few days. “I felt that marriage is a good thing. I was happy in the beginning,” she reminisces. But as time passed, the local of Sanibheri Rural Municipality started feeling the heat. Marriage was not a simple deal. “I gradually felt that everything has fallen out of place. I started feeling very poor about myself when I conceived.”

Parbati who is 43 now gave birth to her first child at 15. By the age of 30, she became the mother of four children. At 35 doctors removed her uterus following severe health complications.

“When I conceived for the first time, my health had started showing poor signs. I used to feel intense pain in my lower stomach. After delivery, I felt even worse,” she said.

Her first child was a daughter. Even if it were a son, she would have a few more children, 'because everyone has more than one child here'.

The legal age to marry in the country is 20. Earlier, it was 16 for girls and 18 for boys. But child marriage is still taken as an ordinary affair in this region. Presently women below 20 years of age constitute 30 per cent of women seeking maternity health services at the Rukum District Hospital.

“When my daughter was born, she was underweight. She was very small. I was concerned for her survival,” said Parbati. “On the other hand, my own health had deteriorated.”

During her first pregnancy, Parbati did not receive any medical attention. Neither did she received proper care at home.

“We don't get nutritious food here in the village, we eat whatever is available. I had to work hard even during pregnancy. Maybe that affected my uterus and my entire health,” she said.

Parbati suffers from backbone pain, swelling of muscles, stomach cramp, among others. She finds it very difficult to perform household chores.

“I feel very much tired most of the time. Fatigue bothers me, and I cannot work hard. Even completing household chores seems a challenging task now,” she laments.

After doctor consultation, Parbati is taking medicines. But she feels that the medicines are only making her weaker. “Doctors had told me to take vitamin and other nutrition supplements, but that's not easy,” she stated.

Dhana Jaisi of Bafikot Rural Municipality – 8 had married at 13 even before she menstruated. Her husband was 15 then. The next year of marriage, at 14, Dhana became a mother. One after another, she gave birth to seven children.

“Because I have too many kids, I could not give them a good education. I indeed wanted to send them to school regularly, but due to poverty, I could not take care of them properly,” she said.

Dhana's husband works in India and comes home occasionally. Whatever savings he gives to the family do not suffice to meet the family's expenses. For Dhana and her kids, getting a two-square meal every day is a big deal.

“Amid such situation, we cannot think of taking care of nutrition or health. My health has become very weak, and people say I should not have given birth to so many children,” she lamented.

Her parents had arranged her marriage 'thinking that girls should get settled early'. She did not know what marriage is actually about. During pregnancy, she hardly took vitamin and calcium tablets.

“If I stand for a long period, my waist aches very badly. I cannot even sweep or mop, as such my house looks dirty,” she said.

The two women's life resembles the average life of a woman in Rukum. Early marriage and motherhood have taken a severe toll on women's and children's health in most parts of this remote district. Even though the government offers free education for kids, a lot of children remain at home during school hours just because parents cannot manage to send them school on time.

According to social activist and advocate, Rachana Malla, early motherhood is the biggest curse for the women in Rukum. “Due to the lack of awareness, they carry heavy loads even during pregnancy and post pregnancy. They hardly get due care and nutritious food. This does lasting impact on their health,” she said. “On the other hand, children's health gets equally affected. During their initial days, babies need good care and proper food. But when mothers themselves are too young and poor, good care of babies' health is out of the question,” she added.

According to Dr Shushil Pokharel, chief of Rukum District Hospital, women's suffering in the district is multidimensional. “They suffer physically, mentally and economically. Poor health, low-income family life and poor financial status grind their life,” he noted. “When girls get married at a very early age, their life is ruined,” he added.

The legal age to marry in the country is 20. Earlier, it was 16 for girls and 18 for boys. But child marriage is still taken as an ordinary affair in this region. Pokharel stated that even now women below 20 years of age constitute 30 per cent of women seeking maternity health services in the hospital.

BAITADI, July 14: Manju Raikal of Raikal village of Purchudi Municipality in Baitadi was watering flowers in her small garden on... Read More...

In Pictures: Students take to the streets demanding justice for Sadiksha Chaudhary
33 minutes ago