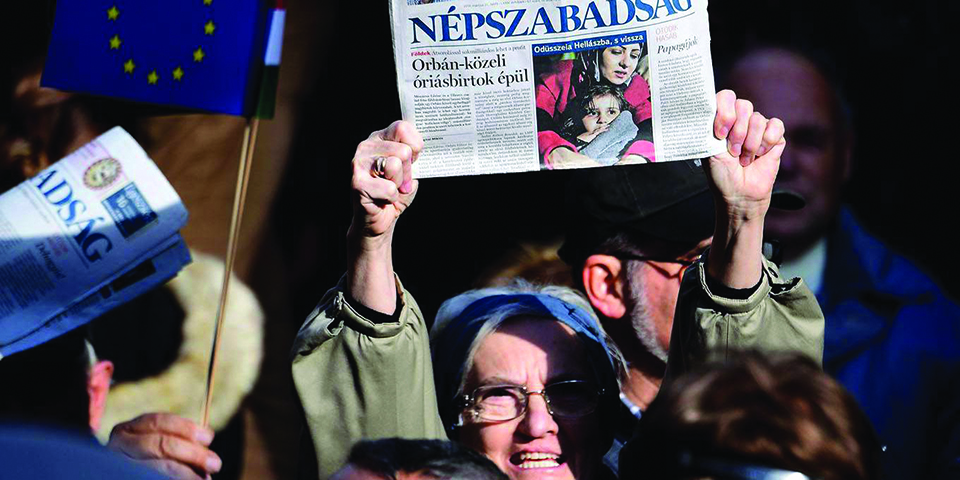 Dire state of media freedom in Hungary is just the beginning. Similar media-capture models and practices are now proliferating across Central and Eastern Europe

BUDAPEST – In its March 22 edition, the Slovenian weekly magazine Mladina featured on its cover a cartoon of Hungarian Prime Minister Viktor Orbán performing a Nazi salute while being hugged by right-wing politicians of the Slovenian Democratic Party (SDS). And Orbán, whose governments have asserted near-total control over his own country’s media, wasn’t taking it lying down.

The cartoon was linked to an article about the decision of the European People’s Party—a  transnational group of center-right political parties that, since 1999, has retained the largest number of seats in the European Parliament—to suspend the membership of Orbán’s Fidesz party. The SDS had strongly opposed that decision, even threatening to quit the EPP if Fidesz was kicked out.

The Hungarian embassy in Slovenia reacted swiftly to the cartoon’s publication, demanding that the country’s foreign ministry “prevent similar incidents from occurring in the future.” Zoltán Kovács, one of Orbán’s most devoted flunkies, slammed Mladina’s leftist sympathies in a blog post.

But the Slovenian government didn’t budge, pointing out that it “strictly” respects freedom of the press. The contrast with Hungary’s government—whose tolerance of dissent has plumbed new depths in recent years—could not be sharper.

Since 2013, Hungary has plummeted 31 places in Reporters Without Borders’ Press Freedom Index. With more than three-quarters of Hungary’s news media now controlled by pro-Fidesz oligarchs, Hungary ranked 87th in 2019, below Sierra Leone, Kyrgyzstan, and El Salvador.

There is little reason to expect a change for the better. Last November, Hungary’s media-owning oligarchs donated a total of 476 outlets, including popular television stations and news portals, to the Central European Press and Media Foundation (KESMA). According to one of Hungary’s few remaining independent news outlets, Atlatszo, KESMA was created specifically to consolidate all pro-government media assets.

But the dire state of media freedom in Hungary is just the beginning. Similar media-capture models and practices are now proliferating across Central and Eastern Europe. Two trends stand out.

The first is imitation, with governments across the region learning from their neighbors—especially from Hungary. After Fidesz won the 2010 election, the new government appointed party loyalists to lead the public service broadcaster. Poland’s ruling Law and Justice (PiS) party followed exactly the same model after its victory in 2015.

The second—and more worrying—trend is the cross-border expansion of oligarchic structures, led by Orbán’s loyalists. In the last two years, Orbán-linked Hungarian businessmen have aggressively taken over media outlets across Central and Eastern Europe, including NOVA24TV.si in Slovenia, Alfa TV in Macedonia, and Hungarian- and Romanian-language newspapers run by Russmedia in Romania.

Financial-industry oligarchs are also rapidly expanding their media activities in Central and Eastern Europe. Companies include Penta Investments, a Slovak firm that has been buying media outlets at home and in the neighboring Czech Republic; J&T, another financial group that invests directly and indirectly in the media; and PPF Media, a conglomerate controlled by Petr Kellner, one of the Czech Republic’s wealthiest entrepreneurs.

Then there is Czech Media Invest (CMI), led by Daniel Křetínský, a lawyer and entrepreneur formerly on J&T’s payroll. CMI been making media acquisitions not only in the Czech Republic and Romania, but also in Western Europe: in 2018, Křetínský bought a stake in the French daily Le Monde.

The increased involvement of oligarchs and large financial groups in the media, coupled with unrelenting attacks by governments, has suffocated independent reporting across the region and driven foreign media operators to flee. Over the last decade, 11 of the 17 most prominent foreign media owners in Central and Eastern Europe have left the region, owing to rising political pressure and declining revenue.

As a result of these trends, media freedom in Central and Eastern Europe arguably is at its lowest level in the three decades since the region’s communist dictatorships were toppled. And it is likely to deteriorate further, as the region’s oligarchs continue to fill the ownership void left behind by foreign media operators.

At this rate, Hungary’s government soon will not need to ask a foreign government to stifle media criticism. Orbán will just have his cronies handle it.

Marius Dragomir is Director of the Center for Media, Data, and Society at Central European University, and managed the research and policy portfolio of the Program on Independent Journalism in London

For sure, Nepal needs some level of media regulation to check or at least control bad media practices and lack... Read More...