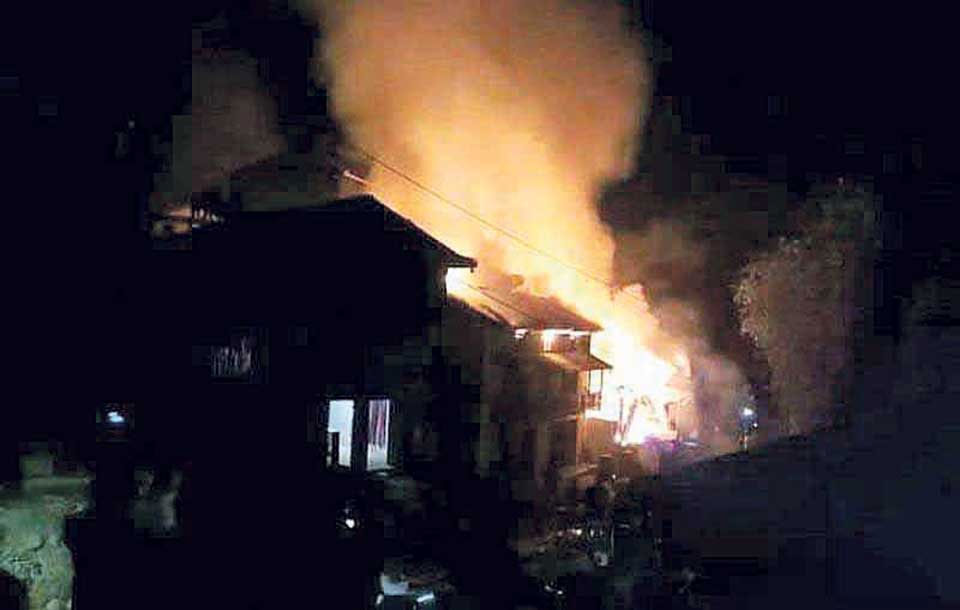 The settlement destroyed by the inferno.

ITAHARI, March 19: On Saturday evening, Renu Sardar, 25 of Sunsari Baraha Municipality had just gone to her bed clutching her three-month-old daughter and a year-and-a-half-old son when she heard people screaming outside. Carrying both the children, Renu came out of her home and saw a massive blaze in front of her. "I rushed toward the eastern part of the settlement," said Renu who was seen staring at her devastated house on Sunday.

Despite losing all the property in the deadly fire, Renu is happy that she was able to save the children and herself. Her husband Krishna is currently in Kathmandu for employment. The fire had reportedly started from the house of local Puran Chaudhary. While some suspect electrical short circuit for the inferno, others said that the fire had started from the kitchen. But the exact reason has yet to be ascertained as none of the members of Chaudhary's family are in contact.

The fire destroyed around 70 huts belonging to 46 families in the settlement, police said. The fire killed 18 cattle and gutted property worth around Rs 10.3 million, according to police. The fire was controlled at around 11:30 pm. Fire engines from Inaruwa, Itahari, Dharan, Biratnagar and Duhabi had arrived to tackle the inferno.

"The fire started spreading at around 8:30 pm but the first fire engine arrived at 9:30 pm and others came later," said fire victim Imananda Chaudhary, who was found salvaging half-burnt rice grains at her fire-destroyed home on Monday morning.

According to him, no one dared to douse the fire fearing for their own lives. "We could hear the explosions of cooking gas cylinders but could do nothing," said Shankar Thapa, inspector of the Armed Police Force Base Camp, Shreepur.

"We have nothing left after the fire," said Bhutanidevi Sardar, a fire victim.

Baraha Municipality had offered meal to the fire victims on Monday morning, according to Kedar Bista, chairman of ward 3. "We have requested various social organizations to provide food to the victims for a few days," said ward chief Bista. District Disaster Relief Committee has provided Rs 5,000 per victim family as immediate relief.

A massive fire in Itahari guts property worth millions

ITAHARI, Dec11: Goods, raw materials and equipment worth over Rs 20 million were gutted when a fire broke out at the... Read More...

USD 800 stolen from student's luggage at TIA
5 minutes ago

Two arrested for raping and murdering a minor
55 minutes ago