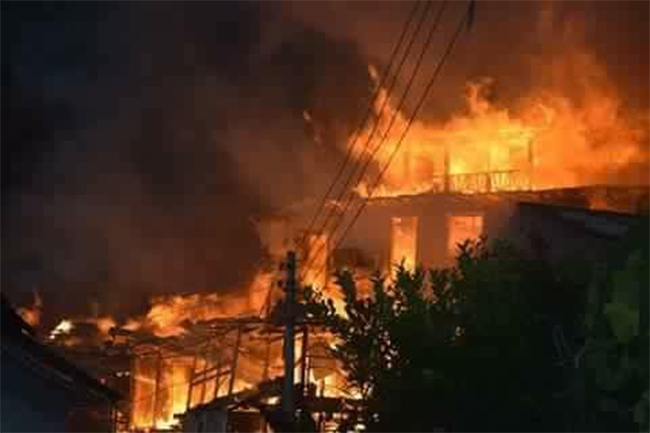 TEHRATHUM, Dec 16: A massive fire in Atharai, Sakranti Bazaar-6 of Terhathum district on Friday morning gutted 32 houses. No one was injured, according to the Area Police Office (APO), Athrai.

The fire was brought under control after hours of tremendous efforts put up by the locals, fire brigade, police and army personnel. Some houses were demolished using excavators to prevent the spread of fire. The fire had started after a cooking gas cylinder leaked and burst in the house of Agni Sedhain, a local.

Along with the owners of the destroyed houses, 27 families living on rent in those houses were also displaced by the fire. Among the displaced are Dipesh Sitaula, Ratna Tamang, Surya Gurung, Khagendra Gurung, Bhadri Sedhain, Amrit Gahatraj, Devendra Pahim, along with others, informed Safal Portel, chief of the APO.

URLABARI, Jan 19: Fire has destroyed property worth around 600 thousand rupees at Biratnagar based Raghupati Jute Mills on Thursday,... Read More...

Assistance for fire victims of Tehrathum

POKHARA, Nov 10: Properties worth Rs 50 million have been gutted by fire that caught Hongkong Bazar, a popular shopping... Read More...

Flood sweeps away a vehicle in Dang
11 hours ago

8 killed, 7 missing in natural disasters in Ilam
6 hours ago