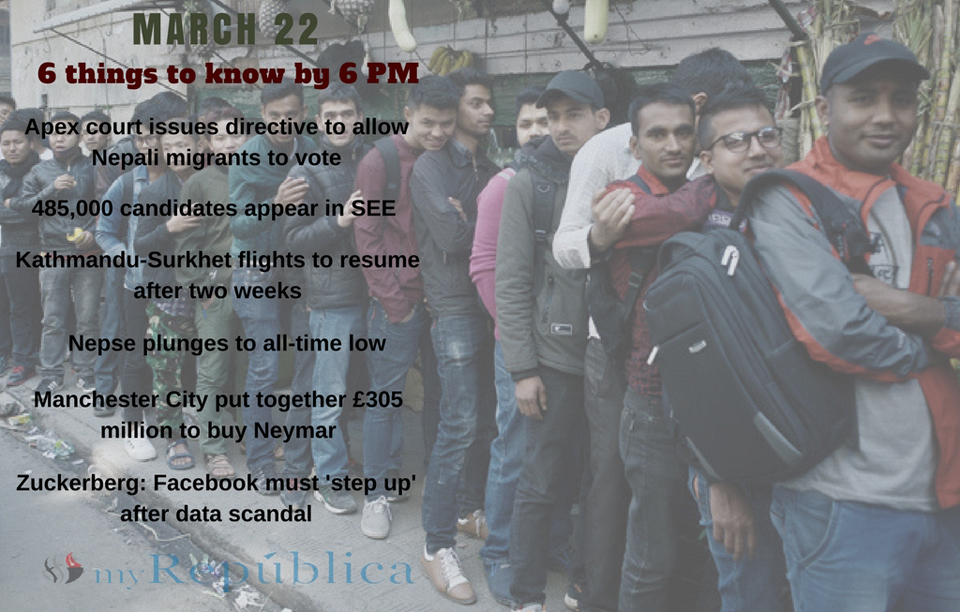 The Supreme Court of Nepal on Wednesday issued a directive in the name of Office of Prime Minister and Council of Ministers (OPMCM) and other ministries concerned including Ministry of Foreign Affairs and Election Commission regarding the External Voting Rights of Nepali Migrant Workers.

The secondary education examination (SEE) has been held simultaneously at 1,956 exam centres across the country today without any hitches. Examinations controller Ambika Prasad Regmi said the exam was conducted from 8 am to 11 am throughout the country in a peaceful manner.

Share market, that has been witnessing free-fall since last few days, plunged to all-time low on Thursday. According to Nepal Stock Exchange (Nepse), the benchmark index fell 10.63 points to close at 1,220.44 points, the last trading of the week.

Manchester City are reportedly ready to put together a stunning £305million transfer package to beat Manchester United and Real Madrid to Paris Saint-Germain forward Neymar.  Pep Guardiola could be handed huge funds to complete this incredible deal, and may also offer Raheem Sterling as part of a swap deal, bringing its total value to roughly £305m, according to Diario Gol.

Facebook chief Mark Zuckerberg broke his silence Wednesday on the data scandal rocking the social media giant, admitting mistakes that led to a "breach of trust" with its two billion users, and vowing to step up. In his first public comments on the uproar over the harvesting of data on 50 million users by a British firm linked to Donald Trump's 2016 campaign, Zuckerberg told Facebook users the firm had "a responsibility to protect your data."