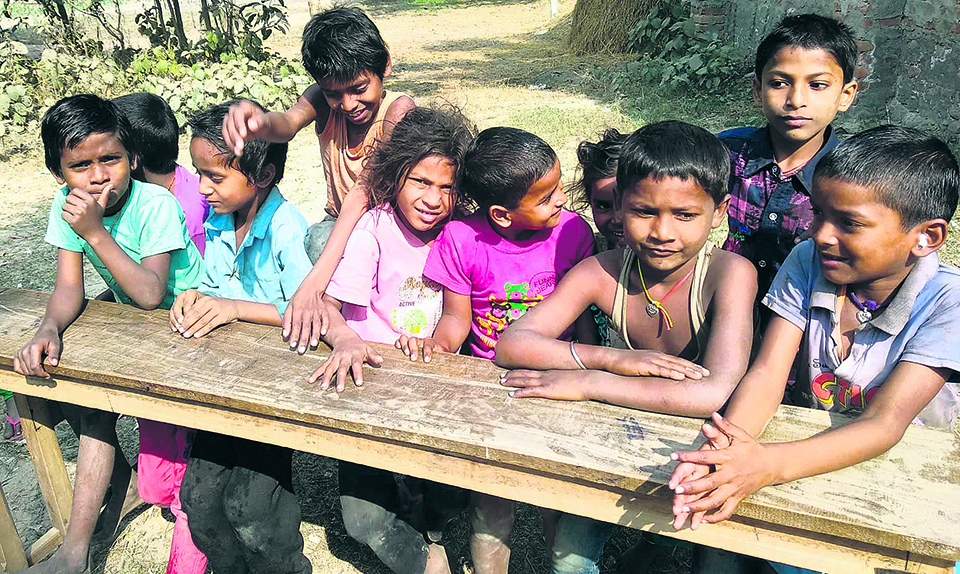 Students of Bishnudashain Primary School of Mahottari sit on a desk in their school's premises in Kabilasha village, Mahottari in this recent picture.

MAHOTTARI, Jan 21: Over 35 schools in Mahottari do not have government quota for teachers. Similarly, nobody really takes notice whether the teacher-student ratio in these schools is fair. According to school teachers, some schools have a single teacher for many students and similarly, there are schools with too many teachers for too fewer students. "Our schools are running in a pathetic condition, we must admit that," said Renu Yadav, principal of a decade-old Bishnudashain Primary School in Kabilasha village.

Bishnudashain Primary School which operates till standard three is the only school within 3 kilometers. Guardians, whose students study at this school, have no other option than to send their children to this school unless they are rich enough to afford to admit them to private schools that offer transportation services. Currently, 157 children are studying in this school.

Over 35 schools in Mahottari do not have teachers' quota. They are running on their own and in lack of funds some of them even don't have basic physical infrastructures to conduct academic activities, including classrooms, toilets.

"We do have enough number of students. But we do not have proper building or rooms for them to study," laments Yadav. "In winter, small children get sick in lack of proper care."

Due to the lack of space, teachers make all the student sit in one place. And this does not let them teach different contents for different classes. "It is not our choice but compulsion to do so. Children from different grades sit in one place. We can't teach them separately," Yadav said.

The school actually does not have even a single room with a concrete roof. The classroom is made of bamboo, mud, bricks, and cow dung. Corrugated sheets cover its roof. There are holes in the walls from where snakes and insects can easily enter into the classroom.

"When the children notice a snake or some insect crawl through the holes, they get terrified. It becomes very hard for us to care for them," Yadav reported.

Last year, the school had received a budget of Rs 1.4 million from Mahottari Education Office. for constructing a building. It built two rooms with the budget, however, they are being used as office space.

"We could not construct the required number of rooms with the allocated budget. The two small rooms constructed with the budget are being used as office spaces for storing important documents," Yadav explained. She added that the school needs a bigger budget for classrooms adequate for the school's students.

This school speaks for the condition of many other schools in the district. Stating that dozens of schools in the district are running poorly, Raj Narayan Jha of the District Education Coordination Committee admitted that the government has not been able to respond to the dire needs of such schools appropriately.

"Over 35 schools in Mahottari do not have teachers' quota. They are running on their own, and they are indeed running poorly. Some of them even don't have basic physical infrastructures to conduct academic activities, including classrooms, toilets," he said.

No wonder, most of these schools do not have toilets. As a result, children defecate and urinate in open areas. According to Yadav, the government's much-hyped open defecation free campaign sounds like a farce when children are sent to school without toilets.

"We cannot teach students that they should not pee anywhere or say anything about healthy defecation habits. They don't have a toilet in school to follow those good habits," Yadav said. "Open defecation free is a campaign led by the government, but it is not supported at schools, which is the main learning place for children."

Praveen Kumar Adhikari, chairperson of the school management committee stated that the school is suffering in lack of funds. "The students are not from a wealthy family. They cannot pay for education. As such we cannot charge tuition fees or any kind of fees to them," he said.

Since there was no school for children nearby, a local Bishnu Raya had taken initiative for establishing this school. He had provided the land for free and asked locals to hire teachers privately. Though the local community is quite dependent on this school, it has not received adequate attention from other quarters.

"For a school to run well, it should have all the necessary infrastructures and resources. But most of the schools in Mahottari are lacking in it," Yadav said.

She asserted that unhealthy politics is one of the reasons why schools have not been able to raise their standard. "The problem is politics. Everyone knows it, but nothing is being done to address it."

MAHOTTARI, April 6: Property worth three million rupees was destroyed in a fire that took place at a printing house... Read More...