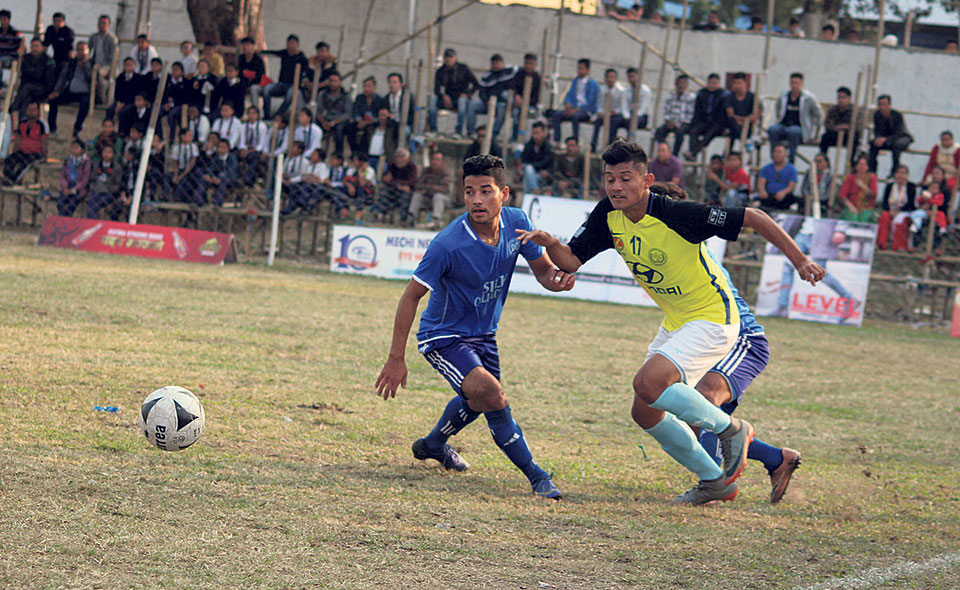 Republica Players of Kakarbhitta Football Training Center (left) and Manang Marshyangdi Club in action during a semifinal match of the Kakarbhitta Gold Cup Football Tournament in Kakarbhitta, Jhapa on Wednesday.

The second semifinal clash witnessed a tensed day as one player each being sent off, frequent clashes among the players and both the sides wasting many opportunities to score.

Kakarbhitta’s skipper Khamir Kandangwa and MMC’s Sujal Shrestha were shown red cards as both teams played with 10-men for the last 22 minutes of the match.

The match was decided in sudden death after both the teams played a goalless draw and was pushed to penalty shootout.

The host Kakarbhitta’s journey ended after its African player Florence hit the crossbar in the sudden death. MMC won the match 8-7.

The two Nepali football giants are meeting in the summit clash for the second time in one week. TAC beat MMC 2-1 to claim the Shatakshi Gold Cup title on November 24.

“We played a very good game,’’ Ghale said, “But, we could not control and balance the game due to the poor conditions of the pitch, which was the reason the game went to sudden death.’’
Kakarbhitta’s head coach Pema Norbu Sherpa said that his team was unlucky to see his captain get a red card in the 68th minute.

“We kept MMC under pressure, but our team’s striker had to leave the pitch,’’ Sherpa said, “Otherwise, we would have scored and won the match.’’

The home team Kakarbhitta created many chances to score and kept MMC under pressure
from the beginning of the second half.

Kandangwa was booked for fouling Sujal, but after he snatched the card from referee’s hand, he was immediately sent off for lack of discipline.