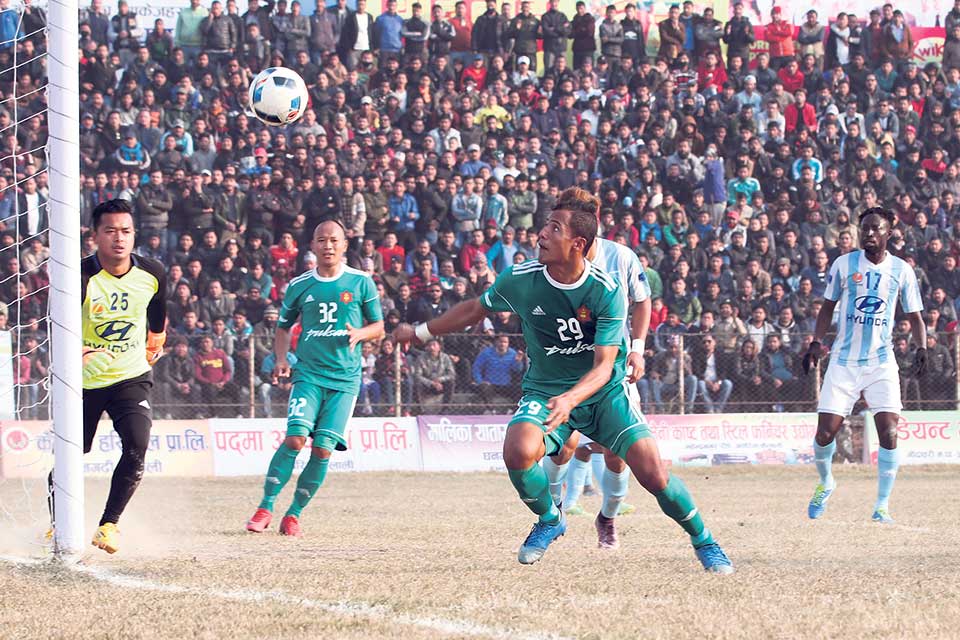 Players of Tribhuvan Army Club (green) and Manang Marshyangdi Club in action during the Far-western Gold Cup football tournament at the Dhangadhi Stadium in Dhangadhi on Saturday. Photo: Republica

MMC, who had beaten Agni Rupandehi XI in the quarterfinals, and had changed two players in its lineup, lost the match despite scoring the first goal. Injured defender Kamal Shrestha and Chris were replaced by Subash Gurung and Bimal Rana respectively.

At the Dhangadhi Stadium, MMC took the lead in the eighth minute through Heman Gurung. Gurung scored the goal utilizing TAC’s goalkeeper Bikesh Kuthu’s failure to pounce on the ball. TAC’s skipper Bharat Khawas equalized for the departmental team in the 20th minute, while Nawayug Shrestha made it 2-1 in the 43rd minute for TAC. Santosh Tamang, then, ended MMC’s hopes to reach the final by scoring a goal before two minutes of final whistle utilizing a pass from Shrestha.

“Our players were tired having to play two matches in two days which affected the match. On what rules did organizers make the fixtures list, questioned Lopsang, “Other teams got 6-7 days rest after playing a match, while we are playing the second game after less than 24 hours. How will we get a positive result in a situation like this? TAC is a physically strong side, so we lost the match.’’

TAC, who had lost its first game in the previous edition, will now face the winner between the host Far-western XI and Armed Police Force (APF).

“The confidence of our players was boosted after equalizing the goal in time. MMC looked tired and we took advantage of that,’’ Neupane said, “We will play to win the title no matter which team we have to face.’’