KATHMANDU, Jun 9: A patient and opportune century by player-of-the-match Sagar Pun supported by a whirlwind half-century by Bhim Sarki sent the departmental team Tribhuvan Army Club into the second successive final of the Inter-provincial Prime Minister Cup (PM Cup) at the TU Cricket Ground in Kirtipur on Friday.

The partnership between the two fetched 115 runs for the fourth wicket improving the dwindling run-rate and posting 289 runs on board and eventually securing the victory by 154 runs. The unbeaten Army will play its second straight final in the two years history of the national one-day competition.

An innings of 118 runs from 142 deliveries which had 10 fours and four sixes as well as three drop catches helped Pun post his first century of the PM Cup whereas Sarki smashed three towering sixes and five boundaries in a chanceless innings of 77 runs from 53 deliveries.

Pace bowler Bikram Sob and left arm spinner Susan Bhari picked up three wickets each in the match to bundle-out Province 5 in 35.5 overs for 135 runs. Sob dismissed both the openers Sandeep Sunar and Subhendu Pandey for 9 and 11 runs respectively and came back in his second spell to remove Lal Bahadur Adhikari for two runs to finish the proceedings of the match.

Spinners Bhari and Pun took the mettle of dismissing the middle-order. All three wickets of Shankar Rana (23), Shakti Gauchan (9) and Bikram Bhusal (0) were clean-bowled by Bhari in an aggressive display of bowling. Similarly, Pun bowled 10 tidy overs in the middle and picked up the wickets of Pranit Thapa Magar (8) and Antim Thapa (14) conceding 29 runs.

Earlier, Province 5 won the toss and elected to bowl first. The bowling team kept Army batsmen at bay for the most part of the first half of the batting innings limiting them to 76 runs at the end of 27th over with three wickets to boot. Anil Mandal (19), Naresh Budhayer (0) and Raju Rijal (5) all struggled to get going as Pun held an end of the innings negotiating accurate spin bowlers of Province 5.

Sunar bowled a misery spell conceding 47 runs from 10 overs with 19 runs coming in his final over. Three catches of Pun were dropped of his bowling including twice by the wicket-keeper Pandey. Bhusal, however, removed two wickets in two balls to push Army scoring in further back-foot.

However, the arrival of Sarki at the crease changed the fortunes of Army batting jointly with Pun to take the total to close to six runs per over from there on. Skipper Binod Bhandari continued his aggressive form with bat scoring another blistering cameo of 37 runs from 15 deliveries including two boundaries and four sixes with a strike rate of 247. Pacer Krishna Karki of Province 5 notched up three wickets to limit damage done by Army batsmen at the tail end of the first innings.

The other two departmental teams Armed Police Force (APF) Club and Nepal Police Club will take on each other in the second semifinal clash of the tournament on Saturday in Kirtipur. 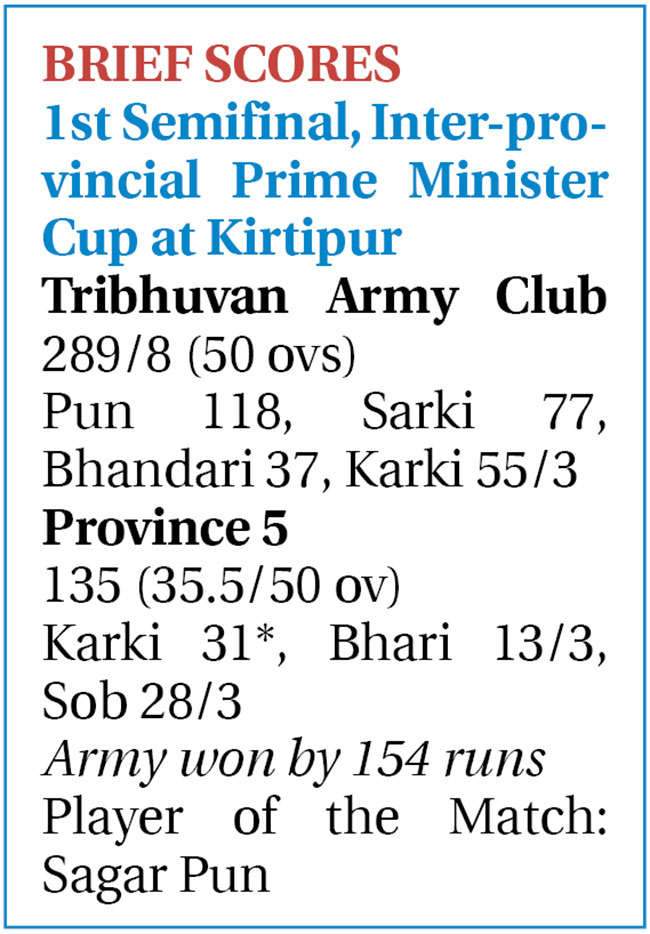