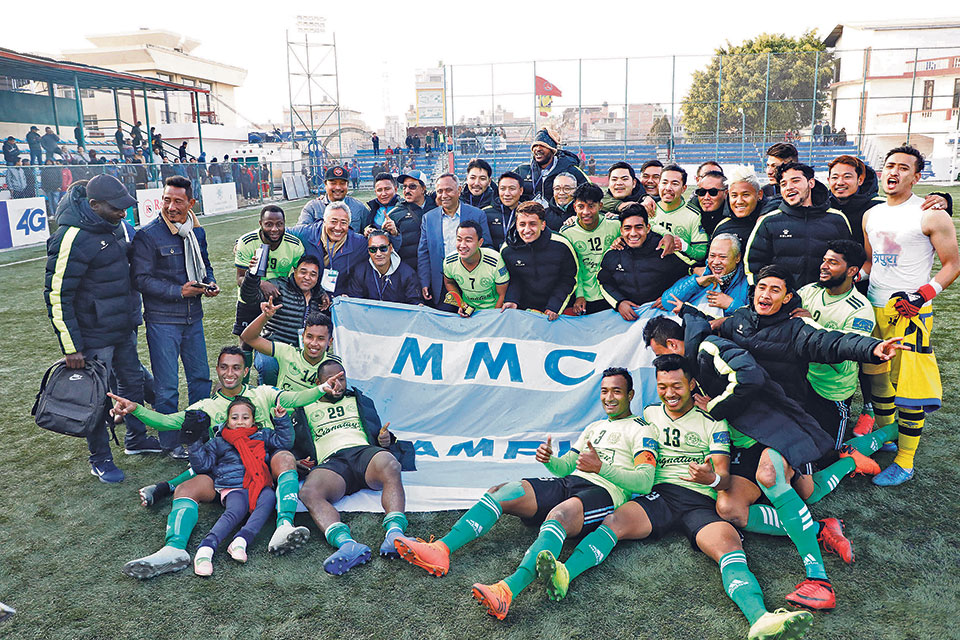 Members of Manang Marshyangdi Club pose for a group photo after defeating Sankata Club and securing the Martyr’s Memorial A-Division League title at the ANFA Complex in Satdobato, Lalitpur in this recent photo. Photo Courtesy: ANFA

KATHMANDU, Jan 5: The Martyr’s Memorial A-Division League that adopted a bizarre no-relegation system is coming to its conclusion with seven matches to be played in four days in the 13th round of the tournament starting from Saturday.

The runaway winner Manang Marshyangdi Club, who has won all its 12 games played so far in the competition, can create a record in the league’s history winning all its 13 games as it faces a struggling team Friends Club, while the departmental team Tribhuvan Army Club and Three Star Club will try to secure the third place by winning their respective games.

Not just on the top, there will be battles to eclipse the two bottom places in the table which will see clubs face points deduction at the start of the next season. Currently New Road Team, Machhindra Club, Friends and Brigade Boys Club can fall into the bottom zone.

So, with high tension heading into the last game week of the season, the competitiveness in the matches can be expected in both top and bottom halves of the league.

Creating history
Manang has gone 12 games without dropping a single point and bossing all the matches so far. It shrugged off tough fights from Three Star, Sankata, Army, Police, including others to stay in the top.
The game against Friends will be vital in creating history in Nepali football as no team has ever won all the matches it has played in this league to date.

With 36 points from the matches played so far, Manang has already secured the league with most goals scored and least goals conceded. It has scored 23 goals, three more than both Sankata and Three Star and just six conceded, two less than fourth-placed Army. All the other teams have conceded goals in double digits.

Its success comes with a different approach of playing football as dictated by new head coach Nigeria’s Fuja Tope and the coach Suman Shrestha. Manang looks to tire its opposition with constant passing displays in the middle area of the pitch, and then launch long balls into the flanks or to the target man Afeez Olawale, who has been pivotal in Manang’s success scoring seven goals.

The defense has been top notch too with the inclusion of Indian Muhammed Asif and Suraj Bishwokarma with keeper Bishal Shrestha keeping out many goal-scoring threats.

The midfield consisting of Dona Thapa, Bikram Lama and Heman Gurung has been crucial in Manang’s success as most of its goals come from the midfield as it unlocks the opposition defense with quick balls into the final third.

Battle for third place
Three Star, a title contender before the start of the season, immeasurably failed in keeping its head high when it first faced a setback during a 2-1 loss at the hands of Manang, but had battled against the other teams and won it. But, Three Star has not been able to win any of its matches since the ninth round of the league. It first was held 1-1 against Army in the ninth round courtesy of a George Prince Karki free-kick in the 94th minute, while Chyasal held Three Star in a goalless draw, which saw the side lose the second spot.

Then two back-to-back losses against Nepal Police Club (3-1) and second-placed Sankata Club (2-1) meant Three Star remain third with just a point above Army going into the last round.
It won’t be that easy for Three Star again as it faces seventh-placed Himalayan Sherpa Club.  A win over Himalayan will mean Three Star finishes second, but if it drops any point, and Army wins against Machhindra, the departmental team will climb third.

Strugglers in serious threat
As four teams can still fall into the last two bottom places, the fight to avoid the places will be a treat to watch for the spectators.

The best game among the strugglers will be when New Road faces Brigade Boys on the last day of the league at the Armed Police Force (APF)’s Halchowk Stadium, while the other two teams will have to get past strong competitions. Friends will have to beat Manang in order to avoid the bottom places, while Machhindra has to beat a motivated Army team.

Currently, New Road is at the bottom of the table with six points from 12 games, while Machhindra is 13th with seven points from the same number of games. Likewise, Brigade is 11th and Friends is 12th with nine points each.

Other encounters
Sankata has been defying all the odds and has now finished ahead of Three Star, and all the three departmental teams.

It has only lost two which came against the champion Manang 3-1 and against Army in a sluggish 5-1 defeat.

It drew against struggler Brigade Boys 1-1.

Now, Sankata will take on APF team, who can also climb to the third place if Three Star loses with more goal difference, and Army loses. APF has 20 points, two less than Army and three less than Three Star.