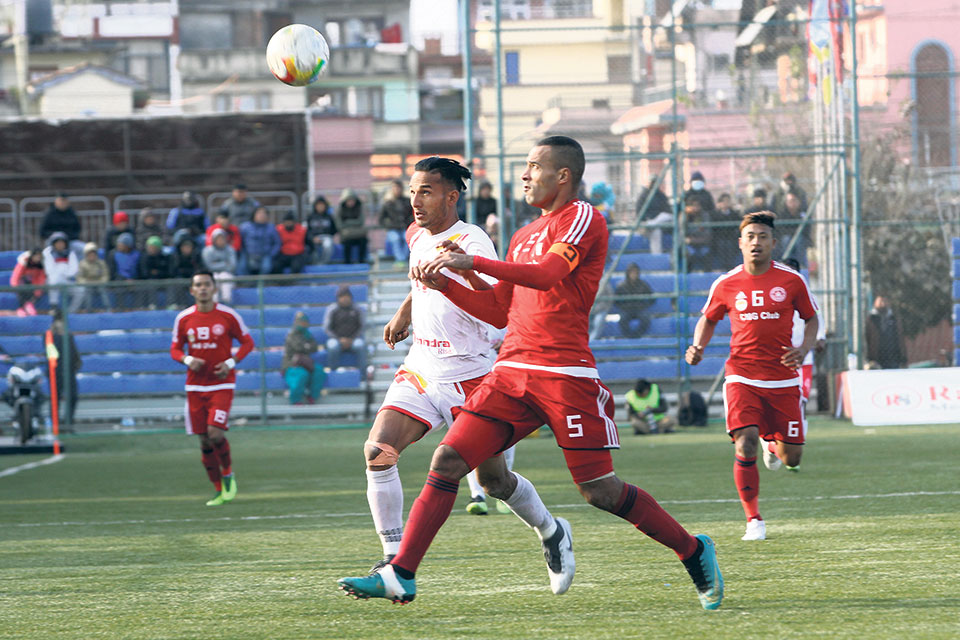 KATHMANDU, Jan 8: Sankata Club, who had already secured the second place, in the ongoing Martyr’s Memorial A-Division League, succumbed to a 1-2 loss at the hands of the departmental team Armed Police Force (APF) Club in Lalitpur on Monday.

At the All Nepal Football Association (ANFA) Complex, Satdobato, goals in either side of the halves helped the departmental team secure a 2-0 lead, but conceded a goal late in the injury time for a 2-1 win.
APF sat back and hit Sankata on counter attacks to get a goal against a good attacking side, and also scored the first goal with the same tactics. APF hit a quick counter attack after Sankata lost the ball near the middle part of the pitch. Yuvraj Khadka took the ball from the center line and went all the way to score the first for APF.

APF got a free-kick in the 74th minute which was taken by Rajendra Rawal and was headed in by Rajan Gurung for the second for APF.

Sankata looked totally in control of the game with its constant attacking threats, but could not win the game as APF was constantly trying to hit Sankata on counter attacks.

Sankata got a consolation as it was awarded a free-kick just outside the danger area. Laxman Ruchal scored directly from the set piece to pull a goal back in the third of the five added minutes, but it was not quite enough to avoid a defeat.

Both the teams got several chances throughout the game to score, but could not capitalize them. Both the teams started the game with quick and accurate passing, but little did they threaten the opposition’s goal.
APF had a real chance in the sixth minute of the game after the Sankata defense line gave the ball away cheaply, but the departmental team could not finish its chance to get an early lead.

Sankata got an even better chance on the other side of the pitch when Ellon Maxwell hit the ball straight into the side netting from close range two minutes after that.

Cedric Aba threatened the APF backline again with a good shot from outside the box, but the ball was punched away to safety by APF goalkeeper Raju Yogi.

Sankata was dominating in the first quarter controlling the possession, but could not create many chances to get a real opener for a goal. But, it had a good chance to score in the 17th minute as Maxwell gave a brilliant pass to Aba, but his close range shot was saved by Yogi again.

Sankata was still dominating come the half an hour, but the first goal scored in the 24th minute by APF came as a surprise getting picked in the counter attack.

Then, APF grew more threatening after it scored the first goal as Khadka pulled a good shot, but the ball hit the post in the 25th minute.

Sankata keeper Raja Babu Thapa had a real scare as APF’s Aashish Lama hit a shot, it was spilled by the keeper, but the defense line just got it clear before an APF player could get to the ball in the 36th minute.

Sankata was still trying to get a goal back, but APF did not concede a goal in the first half courtesy of a good defensive performance.

Sankata still kept on threatening the APF defense line, but the finishing let it down and had to wait for the 93rd minute to get a goal back.

Sankata got a good chance to pull a goal back in the 58th minute, but Aba’s shot from the close range hit the post and went over the bar.

With APF’s second goal, Sankata grew more frustrated. Sankata got a goal back in the 93rd minute, but it could not add more in the remaining around two minutes.

Despite the result, the teams stay intact in their early positions. Sankata is still second with 28 points from 13 games, while APF is fifth with 23 points from the same number of games. Sankata’s loss means runaway leader Manang Marshyangdi Club, who has already won the league, can go 11 points clear at the end of the season with a win over Friends Club on Tuesday.