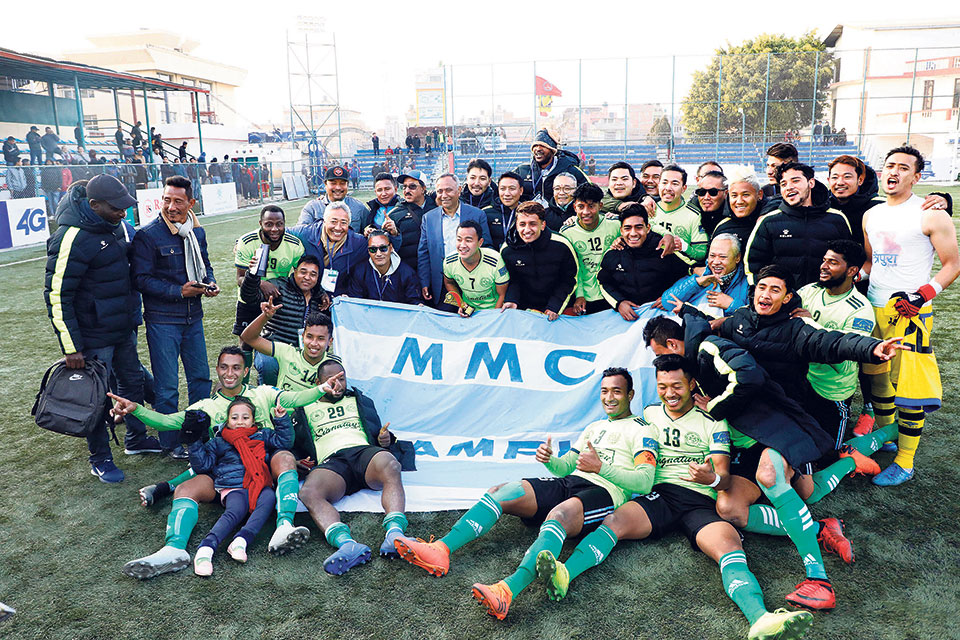 The team to win the second highest titles is B-Division team Ranipokhari Corner Team (RCT) that has so far clinched the title for six times while New Road Team (NRT) and Three Star Club are at the third position with four titles each.

At the All Nepal Football Association (ANFA) Complex in Satdobato, an own goal from Roshan Pahari and strikes from Pujan Uperkoti and Adelaja Somide gave Manang a 3-0 lead within 87 minutes, while Cedric Aba scored the consolation in the 90th minute for the second-placed team.

Manang fired on the target, but the shot was deflected off Pahari in the first of the two added minutes of the first half giving the winner initial lead.

In a highly-competitive game, both the teams presented balanced performances with attacking tactics.

Sankata got a chance in the seventh minute after a lack of communication between the Manang defense line and goalkeeper Bishal Shrestha. Aba beat both the keeper and the defense line, but his lob shot was brilliantly caught by a fast Shrestha.

Manang quickly countered seeing Sankata fail to compose in the positioning, but Sankata fouled a Manang player outside the box and the latter was awarded a free-kick. Manang failed to convert the chance as Kamal Shrestha’s free-kick hit the post and Sankata cleared the ball.

Heman Gurung had another chance to score, but his shot from 30 yards hit the post in the 15th minute. Manang got yet another opportunity to score as Shrestha crossed the ball to Afeez Olawale, but his header in the 34th minute just went wide.

Manang, who led the game 1-0 scoring at the stroke of half time, kept on pursuing for the goal and two more goals in the last nine minutes.

Uperkoti, who came in place of Sujal Shrestha, scored just one minute of coming on the pitch in the 81st minute. Olawale then added the third goal for Manang in the 87th minute to kill the game.

Aba pulled a goal back for Sankata in the 90th minute to make the score 3-1.
With the result, Manang is standing tall at the top of the table with no hands to reach it. It has 33 points from 11 games, while Sankata is still second with 25.

Three Star Club can get to the second place if it beats the departmental team Nepal Police Club on Friday, while Three Star and Sankata will go head-to-head in the 12th round.

In the other game played earlier on the same day, top half teams Armed Police Force (APF) Club and Chyasal Youth Club shared the spoils of a 1-1 draw which meant the teams did not change their positions in the table.

Santa Bahadur Gurung gave Chyasal the lead in the 30th minute of the game, while APF got a goal back in the 54th minute and shared a point.

Both the teams started attacking from the start with chances being created in both ends of the pitch, but little happening in the early phase. Chyasal looked to attack from the flanks, while APF prioritized the middles areas of the pitch isolating the Chyasal front line.
Chyasal started holding the possession for changes from the set pieces, but could not present a threat against a solid APF defense.

The first real chance of the game came to Chyasal’s Amir Shrestha as his shot from the right side of the penalty box went just wide of the frame of the goal in the seventh minute.
Ashish Lama was in the thick of things for APF as he hit a powerful shot in the 25th minute, but the ball hit the cross bar and went out of the danger area.

It was Chyasal that got the breakthrough in the game in the 31st minute as Gurung scored a simple goal from inside the box. Bishwas Adhikari hit a shot firmly in target at APF’s post, but was saved by keeper Raju Yogi. Yogi, who was in a poor position after the shot, could not get the hold on the ball and Gurung pounced on the follow-up to give Chyasal a much deserved lead.

APF got a penalty in the match to restore parity after Chyasal skipper Devendra Tamang fouled Lama inside the box. Sudip Shikhrakhar stepped forwards to take the spot kick, but Chyasal keeper Dinesh Thapa Magar made a splendid diving save to hold on to the lead in the 41st minute.

Chyasal was able to keep hold on its lead, but soon conceded the equalizer 10 minutes into the second half. Shyam Nepali hit a powerful long shot from outside the box, and as the Chyasal keeper Magar could not judge the flight of the ball and conceded in the 54th minute.

APF got control in the game afterwards and began to take the game to Chyasal with fast attacking displays. It was helped on number as well when Gaurav Budathoki was given the marching order after a double yellow card.

APF got a couple of chances in the dying minutes of the match as Pradip Lama hit the shot from six yards out, but it went just wide in the 87th minute.

APF’s Rajan Gurung also hit a shot from just outside the box in the injury time, but the ball hit the bar and came back only for Chyasal to clear the ball.

Chyasal also had a chance to score despite being a man down as Tshiring Gurung picked an unmarked Santa Gurung, but the latter could not hit on target in the 90th minute.
With the result, APF is intact in the sixth place with 17 points from 11 games, while Chyasal is in the eighth place with 15 points from the same number of games.