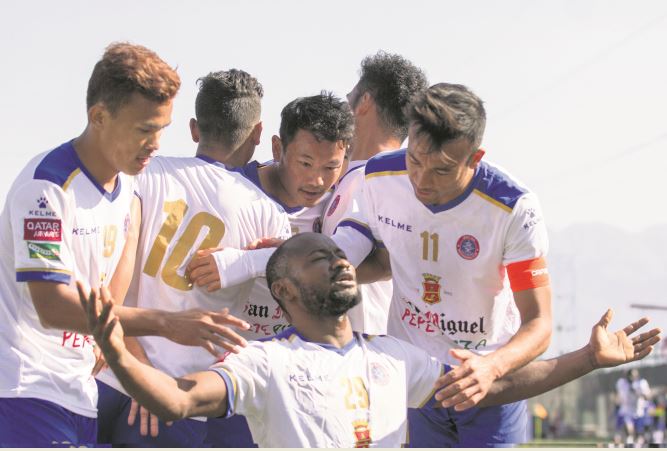 KATHMANDU, Dec 31:  Leader's Manang Marshyangdi Club missed a chance to pull three points clear of second-placed Machhindra Club as it was held to a 1-1 draw by struggler Friends Club in the ongoing Qatar Airways Martyr’s Memorial A-Division League in Lalitpur on Monday.

In the second match of the fourth round held at the All Nepal Football Association (ANFA) Complex in Satdobato, Uttam Rai scored a second-half goal to cut the lead Manang took in the first-half as Friends recorded its first point of the season.

Manang failed to re-extend its three points advantage over second-placed Machhindra as the latter recorded a stunning late 1-0 victory over New Road Team (NRT) earlier in the day.

Manang started the game on attacking mode as it created a series of chances in the first 15 minutes of the game and also added a goal, but threw the other chances stray. Friends defended in blocks with good interception of the ball, but looked desperate to get out of its defensive areas, but its midfield was not able to thread the ball to the forwards to score.

However, it got an early chance to take the lead as Prezen Tamang hit a volley, but the ball hit the crossbar in the fourth minute.

Both the teams switched their gears to attacking mode, but failed to create any other threats in the first 10 minutes of the game.

Manang finally took the lead in the 11th minute as Ranjan Bista scored his first goal of the season, and the very first one for his new club Manang. Former Three Star forward Bista headed in a corner from the point blank range through a Jagajeet Shrestha corner.

With the goal, Manang nullified the Friends attack and prevented it from going through the bylines to score, as it looked the strongest in that area.

Friends got a chance to level the score in the 18th minute as Bishwo Adhikari hit a good shot after a poor clearance from Manang defenders, but keeper Deep Karki produced a save to deny him.

Manang tried to play with counter attacking tactics as soon as Friends lost the ball, but a stern defensive performance from the Friends defenders was enough to deny Manang any further chance to double its advantage.

Friends had a couple of chances from the set piece to score, but the free-kicks were defended well by Manang and did not let any contact develop inside its box near the end of the first-half.

Manang started the second-half on attacking note again as Femi Joshua Aewumi hit a shot from a long distance in the 48th minute, but it was an easy save from Friends keeper Sujit Gurung.

Friends finally equalized in the 63rd minute as Uttam Rai produced a diving header to score for the team after getting a super cross. The Manang defenders were to be blamed in that incident as they did not pressurize the attacking players.

Manang tried to re-establish its authority in the game yet again creating chances, but a poor finishing from the attacking players saw the team lose two points.

With the result, Manang has recorded 10 points from four games and is still yet to lose a game this season. It is unbeaten in the league since the start of the last season. However, Friends is in the 13th place with one point from a draw and three losses.

In the other game of the day, a late goal from Somide Oluwawunmi Adelaja sealed a win for Machhindra against a sluggish NRT side, who faced its second defeat of the season.

Despite starting on a positive attacking mode, NRT looked sluggish all round the pitch.

Darshan Gurung got an early chance for NRT in the third minute, but his right footed shot from outside the target went just wide.

Manang started pushing up for attack as Sujal Shrestha crossed the ball inside the box in the 11th minute, but NRT keeper Ajit Prajapati punched it away to safety. Peter Segun got a chance from a corner, but his header went agonizingly over the bar a minute later.

Despite trying for about 90 minutes, Machhindra finally got the breakthrough as Adelaja headed the ball after Shrestha gave a brilliant cross.

With the result, Machhindra is in the second place with nine points after three wins and a draw. A point was deducted from it as it finished 13th last season.

Likewise, NRT is sixth with four points from as many games. It won two and lost two. Two points were deducted from it as it finished in the last place.

15 dead, 24 wounded in school shooting in Russia
45 minutes ago