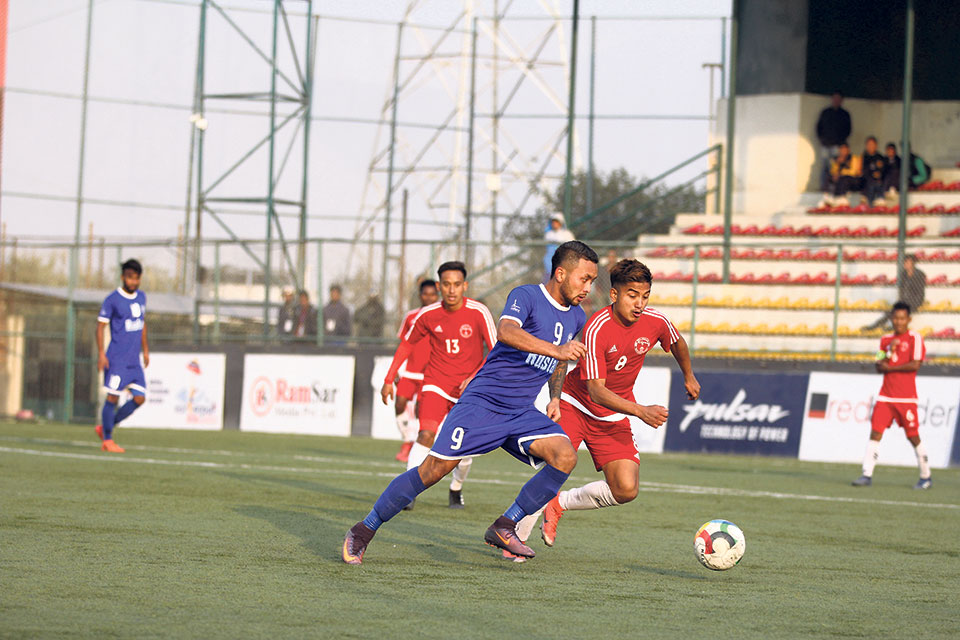 The result meant Sankata is still second on 25, Three Star is third on 23 and chasing their shadows is Army, who is fourth with 21 points. Police can still get to the third place at the maximum, and with two games remaining, the battle for the second place could go to the wire.

At the All Nepal Football Association (ANFA) Complex in Satdobato, Lalitpur, Three Star took the lead in the 13th minute with a goal from Messoumbe Abang Albert as he got a pass from Nirajan Khadka and took advantage of Police keeper Arpan Karki, who came forward to get the ball off him.

Police replied instantly through Nir Kumar Rai as he took the ball away from Three Star defender Peter Segun and scored in the 20th minute.

Both the teams could not score in the remaining period in the first half.

The story in the second half was quite different though as a revitalized Police hit two past Three Star.
Police was awarded a spot kick in the 47th minute as Bijay Dhimal was guilty of controlling the ball with his hand. Abhishek Rijal converted the penalty to give Police the lead. It extended the lead through Bhola Silwal as he beat the Three Star defense line and lobbed the ball past keeper Alan Neupane in the 55th minute.

Police kept on playing its brilliant attacking display controlling the possession with its midfield.
Three Star got a glorious chance to get a goal back through a spot kick, but Ranjit Dhimal’s shot was wonderfully saved by keeper Karki in the 86th minute.

After the loss, Three Star has 23 points and is at the third place after 11 games, and is trailing second-placed Sankata by two points, while Police has climbed third with 18 points from the same number of games.

In the other match played earlier on the same day, Army thrashed Saraswati Youth Club 4-0 to climb to the third place and close the gap with Three Star.

After a commanding win, Army is back in the race for the second place as it is just four points behind Sankata and two behind Three Star. Sankata will take on Three Star in the 12th round, and the fate of these three teams can change instantly.

Army took the lead in the seventh minute through Nawayug Shrestha as the national team forward headed the ball into the back of the net from six yards out of the box after a good cross from Dipak Gurung.

Army was totally dominating in the back from the start capitalizing on a sluggish Saraswati backline.
But, Saraswati initially started the game on the attacking note with constant runs from the flanks, but Army dealt with it properly knocking the ball forward flat-footing Saraswati’s positioning.

Army captain Bharat Khawas was in the thick of things for the departmental side as he scored two and was involved in the fourth goal.

Khawas had a chance to score in the third minute, but his shot went off the target.

Army was in the advantage after Saraswati was limited to 10 men within 29 minutes. Susan Lama was shown two yellow cards in the space of just 20 minutes. He was given the marching order after he fouled Khawas inside the box.

Khawas converted the spot kick with ease placing the ball into the bottom right corner to double the score.

Army started taking charge of the possession with more crosses, but all those crosses were faltered by Saraswati keeper Pradip Bhandari.

Army kept on playing its usual game in the second half and added two more goals for a rout.
Khawas completed his brace in the 62nd minute after Santosh Tamang hit a free-kick which was unable to control by the keeper. Khawas pounced on the rebound to make the score 3-0.

Khawas was in the move again for the fourth Army goal as he hit a fierce from outside the box in the 80th minute, and the ball got deflected off Olusola Kadiri Ibrahim.

Tirtha Basnet got two good chances to extend Army’s lead, but his ineptness in front of the goal made sure it did not happen.

Basnet missed two one vs one chances in the space of just a minute in the 86th, as both of his shot went off the frame of the goal.