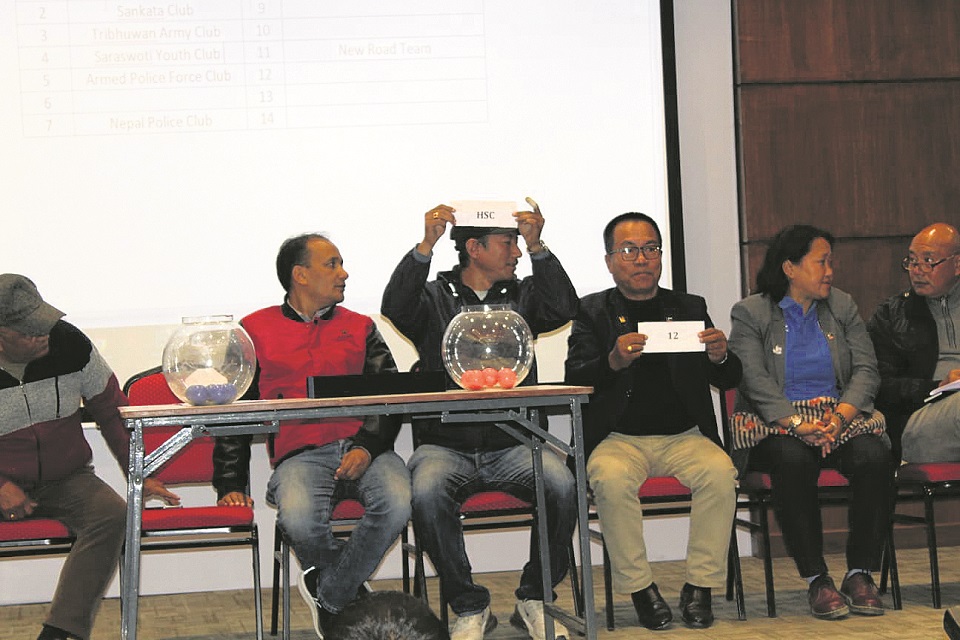 Representatives of All Nepal Football Association (ANFA) during the A-Division League tie-sheet draw at the ANFA Complex in Satdobato, Lalitpur on Friday.

The presidents of respective clubs Chimi Urgen Gurung and Ramesh Byanjankaar had urged ANFA representative at the program to release ‘rules and regulations’ first before the tie-sheet draw which the apex football body was unable to.

“We will sit down to discuss some points for the regulations on Sunday. We can only confirm the final rules and regulations that day. There might be some addition or elimination in the rules,” said a representative of ANFA.

Both clubs did not participated in the draw despite it went as scheduled between the 12 clubs which agreed to follow the program.

The league will return to Dasarath Stadium for the first time after the devastating earthquakes that rattled the nation in 2015. The league is set to start from December 14, four days after the conclusion of 13th South Asian Games (SAG). The mega event’s football final will be played on Dec 10.

Similarly, ANFA complex will be the second venue for the A-Division league which hosted majority of games last year. Likewise, Armed Police Force (APF)’s Halchowk Stadium is dropped as a venue for this season whereas Chyasal’s football ground is prepared as an alternative ground in case required.

Despite Chyasal Youth Club and Manang’s boycott, both the teams are scheduled to play its first matches on Dec 15 and 16 against Sankata Football Club and departmental club Armed Police Force respectively.

Likewise, Saraswati Youth Club and New Road Team will face-off on Dec 26 whereas Three Star Club and Jawalakhel Youth Club will play their respective opening match, against each other, on Dec 17.

Despite ANFA’s scheduled tie-sheet, the officials are yet to decide on the inauguration program which can be held on any day of the first week.