(The author is president of Chamber of Industries, Morang.)
news@myrepublica.com

This article tries to highlight nine ways that the government and other stakeholders can pursue to chart Nepal’s path to economic development.

Although a small country geographically, Nepal is extremely rich in terms of ecology, biodiversity, cultural diversity, arts and culture, and production, consumption and distribution patterns. Nepal’s unique location between two giant economies — India and China — which have been achieving robust economic growths over the past few decades, provides it a golden opportunity to achieve prosperity. This article tries to highlight nine ways the government bodies and other stakeholders concerned can pursue to chart Nepal’s path to economic development.

Banks and financial institutions are currently facing a liquidity crisis. This has resulted in a sharp increase in the interest rates on loans, leaving manufacturing industries that are struggling to recover from the COVID-19 pandemic hit hard again. This has caused the manufacturing sector to pass through one of the most difficult times. The continuous rise in interest rate has left the private sector worried if this will put the country’s manufacturing or productive sector more vulnerable and eventually force them to suspend their operations.

The soaring cost of production due to the continuous rise in the interest rate has also made industrialists unable to predict their investment in any business venture. The Nepal Rastra Bank should make positive intervention by making use of various financial tools it has at its disposal to address this problem. Although the NRB has taken some measures including the provision that makes it mandatory to keep 100 percent cash margin in the import of certain goods, this financial tool alone does not seem to be enough to help address the liquidity crisis. If we look at our own experience in the past, the hike in interest rate does not help solve the liquidity crisis, either. The rise in the interest rate will bring multiple pressures on industries and the businesses, leaving adverse impacts on the country’s manufacturing sector and the overall economy. The government and regulatory bodies both must be cautious about this well on time.

One of the main reasons behind the persisting liquidity crisis in the country is the failure of the government bodies concerned to make adequate capital expenditure on time. Thus, it is necessary to take appropriate measures to expedite public expenditure and ensure adequate cash flow in the market. It is equally important for the government to ensure an interest rate that does not exceed single-digit to the loan provided to the productive sector to take the country forward on the path of prosperity.

Until a few years ago, we were forced to live without electricity for hours due to frequent power outages. Although we no longer have such power outages now, the quality of electricity supply has not yet improved much. Frequent instances of tripping and voltage fluctuations have invited new problems in the industrial sector. While policy makers are talking about exporting power from Nepal, industrialists within the country are forced to install power backup generators or UPS to tackle the problems caused by frequent tripping and voltage fluctuations. Similarly, the construction of roads is equally important to spur economic growth. We need to have a long-term vision to make the roads we build sustainable for at least 100 years while constructing them.

The private sector expects a predictable policy environment for long-term economic and industrial development. We have been saying for a long time that the economic situation could not be strengthened due to political instability. Our policies, rules and laws are unstable. The frequent change in government has had a direct impact on various economic and policy-level arrangements. In order to bring this situation to an end, political parties must be able to forge basic minimum understanding on key issues such as economic development, industrial development and economic diplomacy. Such an understanding among all major political parties can help ensure continuity of fundamental issues of the country's economy even if there is a change in the government. If such an understanding is developed among major political parties, the private sector can predict the productive sector and their potentials and invest with confidence. Thus, a predictable policy environment is absolutely essential to give continuity to policy despite changes in the government and bring about industrial development.

Of course, there are a number of fundamental problems in this sector. As for instance, the state policies are mostly revenue-oriented and control-oriented. It seems our policies and laws are directed at controlling productive activities and raising more tax revenue for the government. Economic development is not possible until we change our thinking to address these shortcomings. Although the government in constitution, policies, acts and laws recognizes the private sector as a development partner and harbinger of development in the country, it has failed to assimilate the fact that the private sector is the one to take risk to make profit and that this sector does not sustain if there is no profit.

We have been exercising the federal system of governance for the past five years. If we take into account the coordination among the federal, provincial and local governments in terms of entrepreneurship and economic as well as industrial development, the situation does not look positive as anticipated. Federalism has made a person or industry to be governed by three different governments -- federal, provincial and local -- and forced them to follow contradictory and often incongruent laws and policies of these three tiers of governments. We are looking for competitive provincial and local governments in order to facilitate and promote industries and entrepreneurships. The private sector expects the coordinating roles and efforts of all three tiers of governments and facilitation and incentive measures to create an enabling environment. It is necessary to facilitate industrialization by making appropriate arrangements to fulfill their obligations and avail services of all three tiers of governments from a single window. 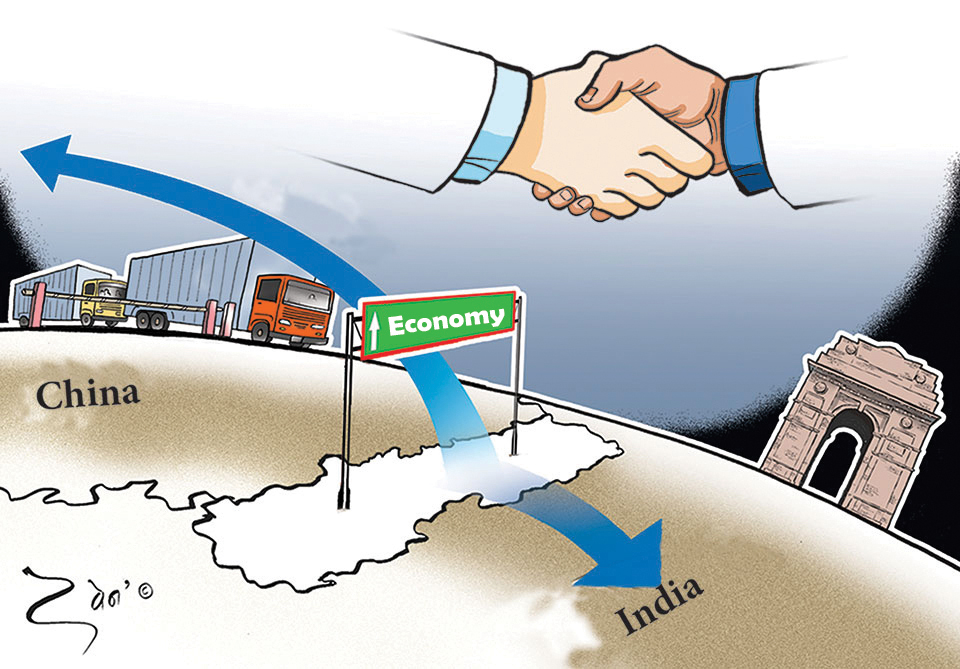 With every passing year, the country is becoming further economically dependent. The contribution of the productive sector, agriculture and non-agriculture sector to the country's Gross Domestic Product is declining at an arithmetical rate. In every foreign trade worth Rs 100, the country is incurring a trade deficit of Rs 92. Young generations of youths are found having increasingly pessimistic outlook about their future in Nepal right since the days in their schools. They want to build their future abroad. Those who are not able to make it to the affluent Western countries are flying to various Gulf destinations and helping make their economies vibrant.

It is equally interesting to note that people in Nepal are more attracted toward trading than manufacturing. It is but natural to see such a tendency as trading helps them to make profits without taking any hassles unlike in the manufacturing sector. Why did such a situation arise in our country? Why are our youths not being able to see their future in their own motherland? Why are economic activities based on local resources like agriculture, tourism, herbs and water are gradually becoming vulnerable? Why are people interested in keeping their money in banks rather than investing it in the productive sector? These questions need soul-searching. But who is responsible to give answers to these questions? Who is accountable to answer these questions? Why could the issues included in the manifesto of political parties not be implemented? Should political parties not be held accountable for their failure to deliver on their promises to the people? We can move ahead on the path of economic prosperity only if all stakeholders concerned work with accountability.

The COVID-19 pandemic has made countries that have poor health infrastructures and import-oriented economies to face serious humanitarian and economic losses. The pandemic has reminded us all to change the country's economic priorities. For instance, natural calamities like earthquakes, the massive flood caused due to the breach of embankment by the Saptakoshi River and breakdown of Mirpur Bridge in India adversely affected economic activities of Province 1 in the recent past. In view of the COVID-19 pandemic that ravaged the country's economy, it is necessary on the part of the government to promote innovation and determine new priorities in the changed context to help economic recovery.

Micro, small, medium enterprises and small businesses and entrepreneurships run by women are the backbone of the country's economy. However, they are hit hard by the pandemic and are on the verge of collapse. Based on the country's indigenous identity, culture, local means and resources and knowledge, these enterprises have a huge potential to meet the local needs and make foreign currency earning through exports. However, these enterprises have remained as the missing middle for a long time in all government's policies, programs and incentives. As a result, the enterprises could not upgrade themselves and transform and prosper as corporate entities. This in return has lowered the interest of the young generation to the professions their parents are involved in. Indeed, there is a greater challenge of a generational transfer in their sector. Since this sector constitutes 90 percent of the total Industrial Gross Domestic Product, it is high time the government bodies concerned made concrete and effective intervention for the development of this sector.

Similarly, there has not been any concrete effort till date to establish a linkage between the academic sector and industries to chart the path to industrialization. This is very important. Industries operating in the country are not in a position to take benefit from the knowledge generated by the academic sector as they do not match their needs. An environment conducive to utilizing innovative thinking is lacking. Thus, it is high time the government and other stakeholders concerned worked toward establishing linkages between industries and academic centers for the development of the country's industrial sector.

Innovative professional ideas and concepts that youths have are being wasted even without experiment mainly due to the lack of the right environment, required professional services and access to the available services. While countries around the world are promoting start-up entrepreneurships and investing a lot in its development, people with such innovative ideas and start-ups are leaving the country out of frustration. Many such brilliant ideas are also simply lost as the government bodies do not seem to give priority to utilizing such ideas. Thus, government bodies concerned should act as a catalyst to promote innovation and entrepreneurship by ensuring access to financial resources and facilitating and coordinating to establish new entrepreneurship and industry professionals. The promotion of innovative ideas and start-ups is a key to developing the country.

(The author is president of Chamber of Industries, Morang.)

From the beginning, EU-Nepal relations have been based on mutual respect, learning from each other and support to Nepal’s development Read More...