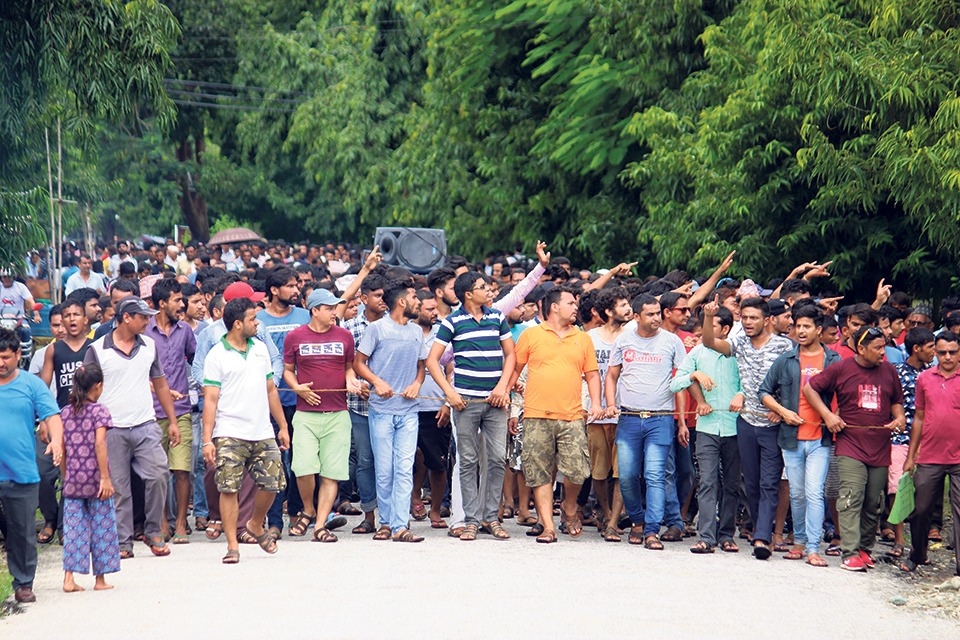 Hundreds of locals stage a demonstration outside the District Administration Office (DAO), Kanchanpur on Thursday calling for justice for Nirmala Panta, the 13-year-old who was raped and murdered on July 26. Police used over 150 tear gas canisters and live rounds in an ensuing clash outside the DAO. | Photo: Republica

KANCHANPUR, Aug 23: The local administration has enforced a 12-hour curfew in Mahendranagar and surrounding areas of Kanchanpur district after eight persons including six protesters and two police were injured in a clash on Thursday afternoon.

Police had fired tear gas canisters and bullets at the protesters when they demonstrated in front of the District Administration Office demanding punishment for those involved in the July 26 rape and murder of 13-year-old Nirmala Panta. Protesters and security personnel clashed for two hours starting at 2 pm.

Afterward, a meeting of the District Security Committee enforced curfew from 5 pm Thursday to 5 am Friday, according to the chief district officer Kumar Bahadur Khadka.

Police fired more than 150 tear gas shells at the stone-throwing protesters. As two policemen were injured in the clash with the protesters, police had opened fire at the protesters. Police opened fire when the irate protesters reached close to District Administration Office demanding action against the culprits involved in the rape and murder.

Among the injured Arjun Bhandari, 17, who received bullet injury to his leg, is reportedly critical. Bhandari has been referred to Seti Zonal Hospital after primary treatment at the local hospital. Other injured have been identified as Tej Bhatta, Krit Paneru, Manoj Budha, Saroj Khadka and Santosh Kathariya.

The two police injured in the clash have been identified as Harka Bahadur Pal and Mahesh Bhatta.

Locals have been protesting over the past few days claiming that the local police arrested a mentally-disabled Dilip Singh Bista for the rape and murder. Locals claimed that police framed Bista to protect the ‘real criminal’.

Nirmala, a local of Bhimdatta Municipality-2, Kolti, had gone missing on July 26. Her body was recovered from a sugarcane field the next day.

KATHMANDU, Aug 26: The curfew imposed on Kanchanpur since Saturday has been lifted on Sunday from 6 PM till 10... Read More...

KANCHANPUR, Aug 26: The curfew enforced in Kanchanpur since Friday night has been lifted for five hours this morning. The... Read More...