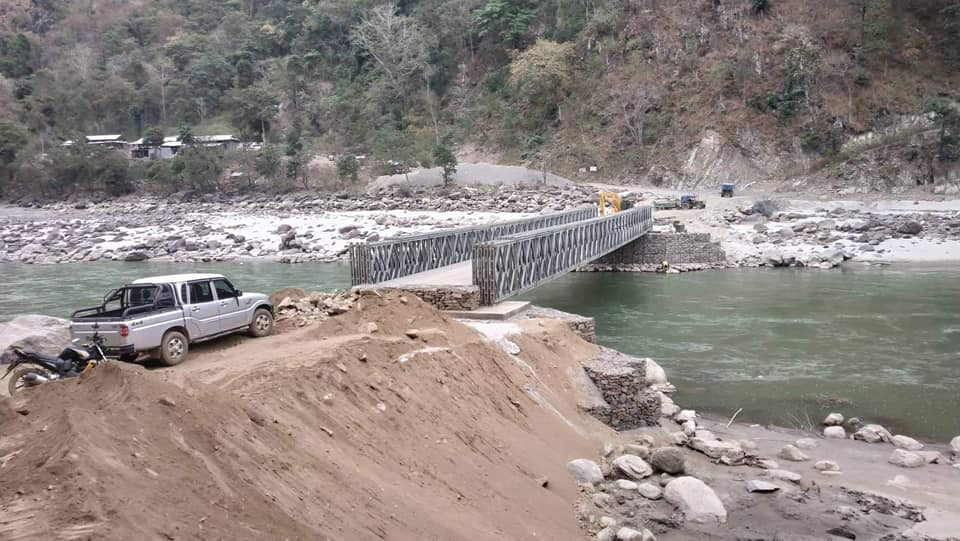 The temporary Bailey bridge of Foksingtar which has been removed with the beginning of monsoon.

KHOTANG, June 6: With the onset of monsoon, government authorities have removed a temporary Bailey bridge over the Sunkoshi River in Foksingtar of Khotang district due to the rising level of water.

The removal of the bridge has left Khotang almost isolated from the rest of the country except for the only another alternative route which is much lengthier.

The Bailey bridge at Foksingtar connects Khotang with Udayapur. This bridge is often removed in monsoon and comes into operation only after the end of monsoon.

With this, the transportation along the Diktel-Gaighat route has been halted for six months. This has compelled the locals of Khotang to use the lengthy route of Diktel-Halesi-Jayram-Ghurmi-Katari to reach the district headquarters of Udayapur.

Locals here are obliged to rely on the temporary Bailey bridge in lack of concrete bridge. Manoj Bajimaya, general secretary of Khotang Chamber of Commerce and Industry, says the removal of the Bailey bridge has increased the cost of construction materials in the district.

"As the construction materials must be brought through the lengthy route of Katari and Ghurmi, their prices have been hiked," said General Secretary Bajimaya. It has been four years since this Bailey bridge has been used as an alternative means to reach Khotang.

It costs around Rs 8 million to remove and again replace the bridge every year.

Kailash Shah, divisional engineer of Sector 1 of the Road Division Project, informed Republica that only 30% of the work has been completed so far.

Gauri Parvati YP JV was handed the contract of the project worth Rs 196 million. The locals have time and again vented their ire against the sluggish construction of the bridge.

Even though the project was signed on April 5, 2013, the construction work kicked off only in 2016. The deadline expired in April 2019. Last year, lawmaker Bishal Bhattarai had filed a complaint against the construction company with the Home Ministry for the delay in work. He also demanded blacklisting the company. However, that did not happen. The company then started the work.

The snail-paced work of the bridge has also grabbed the attention of the Commission for the Investigation of Abuse of Authority (CIAA). According to the anti-graft body, it sent a letter to the company on January 16, 2018 to speed up the work.

Rules of the road

KHOTANG, May 22: Abortion by unregistered health workers is increasing in Khotang. The District Hospital, Khotang on Tuesday held an interaction... Read More...

Measures to continue paragliding business in Pokhara will be explored: Minister Shrestha
36 minutes ago