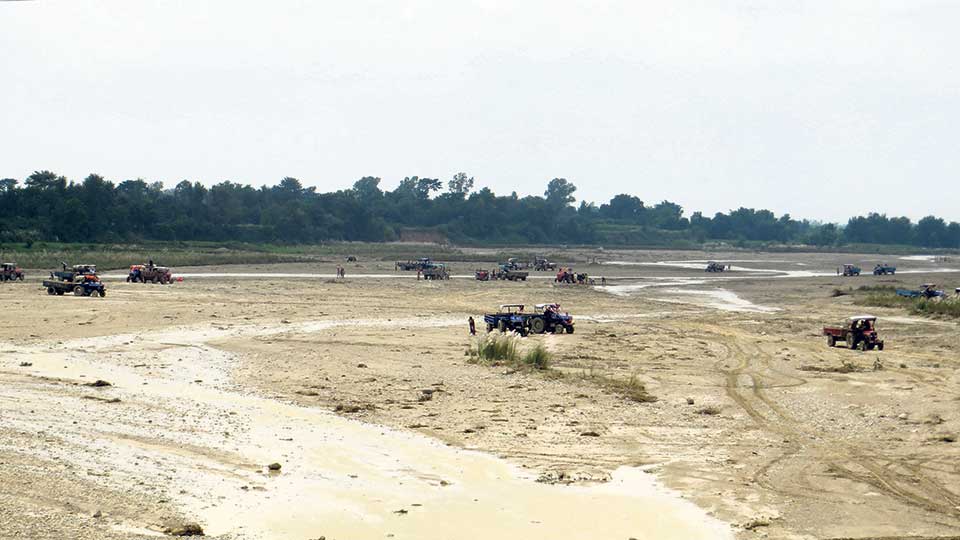 Tractor trailers loading sand and aggregates from the bank of Khatti River, in Lahan in this recent picture. | Photo: Mithilesh Yadav/Republica

LAHAN, Nov 1: During the last local and provincial elections, one of the promises that almost all political parties and leaders made was prioritizing the conservation of nature and wildlife, especially the Chure range. They stated that the Chure range ecosystem had been badly damaged and vowed to take measures to put an end to activities that were deteriorating the ecosystem further. Deforestation and mining of aggregates, sand and stones from river beds and mountains in the Chure region were put forward as the major factors damaging the range’s ecosystem and politicians had pledged to put an end to such activities.

However, locals here feel that the condition has worsened further since the local and provincial governments came into power. They assert that the row between local, provincial and central governments over the rights to control natural resources including the mining of aggregates, sand and stones from rivers and management of forest resources has led to an escalation of such activities.

“It is very unfortunate to see the rivers and jungles destroyed in front of our eyes,” said a local of Lahan, requesting anonymity. “Hundreds of trucks carry stones, aggregates and sand from the rivers. Along with that smuggling of the timber continues unabated,” he added.

Chief administrative officer of Lahan Municipality, Tirtharaj Bhattarai asserts that the rivers and forests need to be protected further but notes that there legal and practical constraints that should be addressed.

“We understand that these are serious problems and we are doing our best to control them. However, there are limitations,” he said. “We depend on natural resources to generate revenue while fulfilling needs of the municipality. Along with these practical concerns, we also have legal complications to overcome for taking decisions,” he added.

He shared that the municipality follows guidelines while issuing licenses to contractors for mining aggregates, stones and sand from rivers and asserted that the municipal office has been acting responsibly. However, he agreed that management of the rivers and jungles has been done in fragments by local governments and this has made conservation efforts ineffective.

One of the related issues over which there has been discontent among the locals is the building of embankments along the banks of Balan River. Two years ago the Water Induced Disaster Control Office took initiatives to build embankment to control flooding. The decision was taken after the river changed its course and posed flood risk to the nearby villages. This decision to build embankments had given a huge relief to the people. However, the municipality scrapped the decision and even issued call for bids for mining aggregates and stones from the river.

Vehicles have been lazily stopped in a line at the Amlekhgunj-Pathlaiya road section inside Parsa National Park. At the end... Read More...

Nepal is currently celebrating National Wildlife Week with the theme ‘Let’s unite for wildlife conservation’. As the celebrations continue, we... Read More...