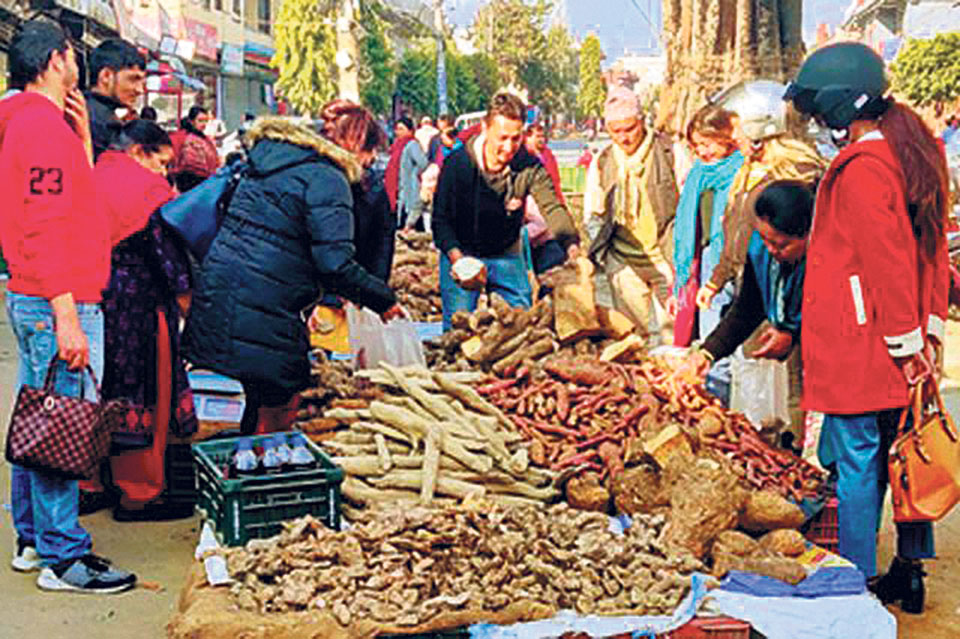 Though yam has several nutritional benefits, this crop has remained neglected and underutilized in Nepal

Nepalis celebrate Maghe Sakranti (first day of Magh) by consuming different tuber crops mainly yam and sweet potato. They did so this year too. Normally, people boil the yams in the evening of the last day of Poush and relish them the next morning with ghee and chaku. Generally, sesame seed Laddus, molasses, ghee, sweet potatoes and yam are included in the menu. It is widely believed that the boiled yams taken on the morning of Maghe Sakranti staves off cold-related ailments. People in Kathmandu also celebrate this festival with delicacies made from yam, ghee and chaku. That is why mountains of yams are seen in Kalimati and Balkhu wholesale markets every year during Maghe Sakranti. It has also a cultural and religious importance in Nepali society.

Origin and types
Yam, which is called tarul in Nepali, is the common name for some plant species in the genus Dioscorea and family Dioscoreaceae. Most of the yam plants are vigorous and herbaceous vines, providing an edible tuber. They are native to Africa, Asia and the Americas. Yam tubers vary in size. The starchy reserves of yams are a principle source of carbohydrates for many different indigenous people living in the tropics and subtropics of the world. In Nepal, wild edible yam is considered a top quality wild root crop and it is still used as a staple food in Chepang community. In fact, yams are prominent staple food for these people during food shortage.

There are over 600 species of yam worldwide but in Nepal 13 species are reported and Chepang people use 10 species (nine species as food and one for other purposes). Out of 10 species used by them, eight are obtained from the wild and two are cultivated. People visit forests, individually or in groups, to collect tubers of Dioscorea spp. Tubers are mostly harvested during January to May.

While the people in the cities and towns buy yams from the markets for Maghe Sakranti, people in villages fulfill their needs from their kitchen gardens and nearby jungles. Although, almost all households in low-hill and Tarai grow ghartarul (cultivated yam), they also visit the nearby jungle to collect ban tarul (wild yam). As one requires more energy and time to dig ban tarul, it is naturally more expensive than other types of yams.  The market price of this type of yam is much higher.

The wild yam between the two boulders is generally small and flat. It is very difficult to dig out when it grows in the difficult slope of the mountain and one should be more careful to it bring it safely. But farmers are not aware of the decreasing condition of the resource in the wild due to faulty harvesting. They usually collect whole masses of tubers from mature plants inhibiting vegetative propagation. In such condition, plant regeneration takes place only through bulbils if they get chance to grow. Sometimes tubers are harvested even before the growth of bulbils. People also harvest above-ground parts of the plant as fodder. Such practice prevents even formation of bulbils

Health benefits
There are reports that yam contains five times more protein than potatoes and sweet potatoes. They are a very good source of dietary fiber and potassium. They are also a good source of several vitamins, including vitamins B1, B6, and C. In addition, yams are a good source of manganese and carbohydrates.

They are used for the treatment of cancer, diabetes and heart diseases. They have been recognized as “health/functional food” and when mixed with breads or flour, their nutritional value and palatability increase. Several components of yams, such as potassium, folate, and various antioxidants are known to provide neurological benefits. Folate has been known to reduce the occurrence of Alzheimer disease and cognitive decline. Potassium has been linked to increased blood flow to the brain and heightens cognition, concentration, and neural activity. Yams are also perfect for helping decrease blood pressure.

Though yam has several nutritional benefits, this crop has remained neglected and underutilized. The problems faced by farmers in yam production include lack of adequate farm inputs, high costs of hired labor, and lack of improved seed yam. Nationally there is no research and extension program to support farmers in yam production. One of the main reasons for this crop being neglected is labor associated with planting and harvesting, lack of multiple harvest and short shelf life. Furthermore, the unavailability of quality planting materials in adequate quantity and pests and diseases in both field and storage are making yam cultivation less attractive.

However, a simple technique has been introduced in recent years to grow yam in sacks filled with soil and placed on the base of terrace walls. This method eases harvest of yams. In addition the sacks with yam help reduce soil erosion or wall collapse. The sacks are placed on the terrace walls. Harvest is done by simply cutting/tearing the sacks and taking out tubers.

In Nepal, studies involving yam cultivation are still in preliminary stage. Urgent government intervention with measures to aid researchers, extension workers and farmers is necessary. Risk of genetic erosion is also one of the main issues that needs due attention. Considering the cultural, religious and medicinal importance, and market demand, its production needs to be increased. At the same time its local land races need also be conserved and utilized properly.

The display and supply of yams in Kathmandu market is in increasing trend and more than 90 percent of the total supply is sold during Maghe Sakranti.  In this context, this scribe suggests that Magh 1 is celebrated as National Tarul Day by organizing different promotional activities like display of various types of yam, production technologies, harvesting techniques and product diversification. Nepal, an agrarian country, is self-reliant at least in yam. Almost all yams supplied to the Kathmandu Valley during Maghe Sakranti are grown in Sarlahi and other neighboring districts. Let us maintain this self-reliance and also work to increase the production of this valuable crop.

KATHMANDU, Jan 10: With a drop in the mercury and arrival of Maghe Sankranti, the demand for molasses has skyrocketed.... Read More...

Chaku production in full swing at Tokha (With Photos)

KATHMANDU, Jan 4: The aroma of ‘chaku’ has filled the air in various alleys and intersections of Tokha. Anyone visiting... Read More...

A Generation in making Chaku

The techniques of making food are precious when it is passed down to the generation. And when the family works... Read More...

Nepse inches up 4.97 points, while daily turnover amount dips to Rs 1.76 billion on Wednesday
31 minutes ago