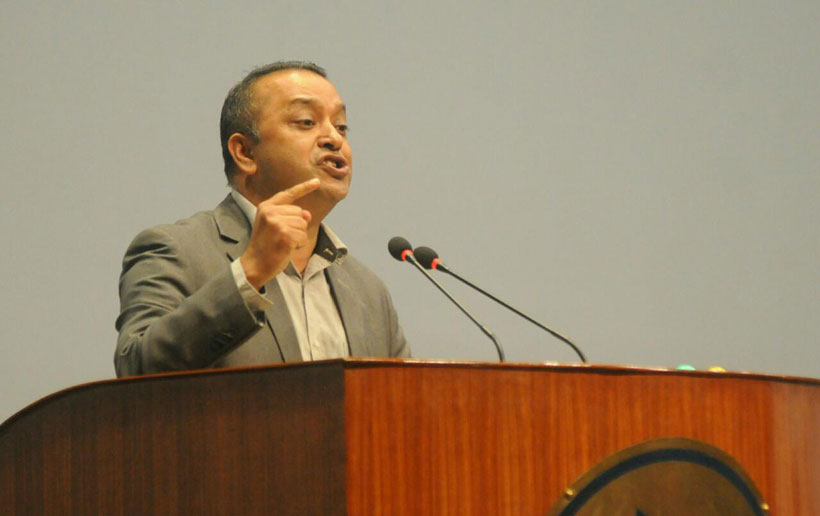 KATHMANDU, Oct 25: Minister for Health and Nepali Congress lawmaker has called upon all the lawmakers to stand united for the impeachment motion again suspended CIAA chief Lokman Singh Karki.

Speaking in the Legislature-Parliament today he stressed on the need to make the impeachment issue against Karki as the agenda of the Parliament.

Meanwhile, he urged all the parties to  remain united until the constitution is implemented.

Thapa further said that the impeachment issue has been associated with the dignity and independence of Nepal and the entire Nepali people, recalling how he had been appointed as CIAA chief amid controversies over his questionable background.

He hinted that Karki had been appointed as CIAA chief amid controversies at the Research and Analysis Wing (RAW)’s behest.

He further said that the Comission for the Investigation of Abuse of Authority (CIAA) - an anti-graft body -  should be established in such a way that it will be able to make our country corruption free.

Registered on last Wednesday by 157 lawmakers, the Parliament has begun deliberations on the impeachment motion against Karki from Tuesday.

Let’s not squander the opportunity: Gagan Thapa on impeachment motion

KATHMANDU, Oct 20: Nepali Congress (NC) has decided to forge a clear view on the impeachment motion at the parliament... Read More...

Impeachment of Karki is a must for corruption free Nepal: Lawmaker Adhikari (with video)

KATHMANDU, Oct 25: CPN-UML lawmaker Rabindra Adhikari has said the impeachment motion tabled in the Parliament is not the issue... Read More...

COVID infection rate in Nepal drops to 14.3 percent
7 hours ago

Brazil passes half a million COVID-19 deaths, experts warn of worse ahead
10 hours ago