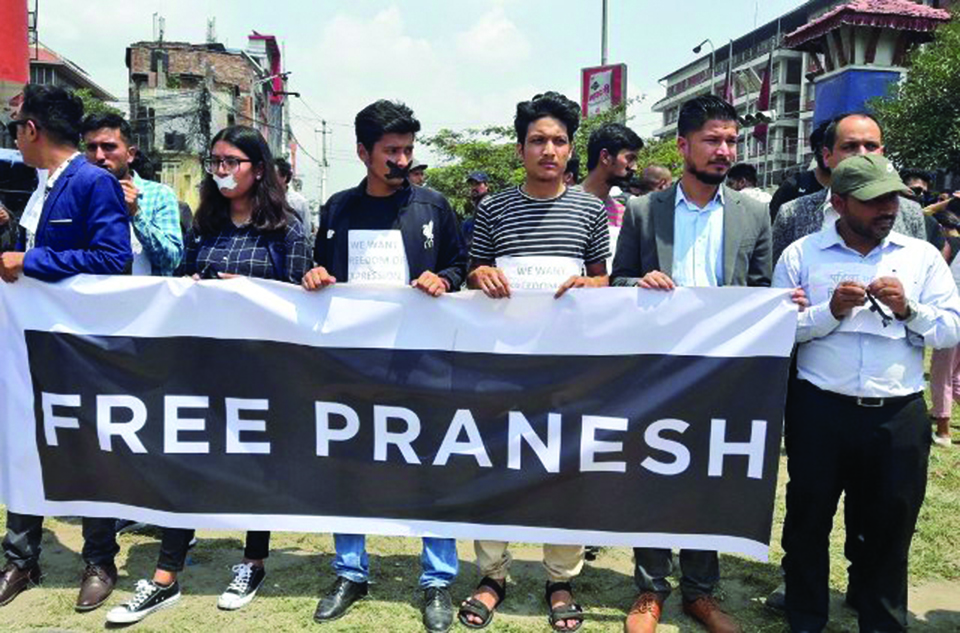 We cannot let the police to decide which expressions are criminal, which opinions are unsayable, which ideas are beyond humor or ridicule. It is the road to totalitarianism

Honesty is not in our gene. We are not honest, and we don’t expect others to be honest. We want coddling, we want to be pampered and served with a majestic splendor that would put royal families to shame. We want to be cajoled, worshipped, eulogies written of our greatness in front of our eyes, so we can bask in the blaze of our own glory.

We are scared of freedom because that would allow individual to be honest. Honesty is brutal. Vile deluge of honesty threatens our cocoon of glory.

Let us look at the road we are taking. Government bans access to internet pornography. Government also attempts to ban a mobile game. A movie director, an artist that he proclaims himself, complains to the police and gets the reviewer of his movie arrested. First two cases, in which government is acting suo moto to curtail individual liberty, are unacceptable, but the third case, one individual suppressing another’s right to expression, aided and abetted by government machineries, is inconceivable. And this happens in our nation, repeatedly in one form or other.

This affliction of self-superiority complex is possibly ingrained in us. We don’t seem to acknowledge that the rest of others thinking differently than us should not be an alarming proposition.

We have designed our laws to protect, and not engage the common masses. Our constitution, which guarantees freedom of expression and individual liberty, exceptionalizes imposing ‘reasonable restrictions’ on any act which may be contrary to public decency or morality. In other words, public decency and morality are non-negotiable elements when weighted against freedom of expression. As a result the dragon Clause 47 of the Electronic Transaction Act still stands, of which the above reviewer is charged. Which is ironically titled “publication of illegal materials in electronic form”, which further characterizes offense: “If any person publishes or displays any material in the electronic media which may be contrary to the public morality or decent behavior…”

This vagueness of public decency and morality clause, which might have been drafted with altruistic intentions, possesses greatest threat to liberty with grave practical implications. No reasonable tests can be designed to classify what constitutes public decency and morality as a general principle. They are ambiguous certainties of their own kind. Even if some kind of test is designed and implemented it is bound to become obsolete in no time. The dynamics of social evolution are not bound by rigid legal tests. This puts the individual liberty on a defensive position, because you have to objectively prove before indulging, that the act itself is not indecent or immoral. This emboldens the state actors and non-state actors to try and curtail the actions and expressions they deem indecent or immoral. This also emboldens the fringe elements and activists to petition the government to curtail certain kind of act and expression that they deem indecent or immoral. And the list goes on.

All individual actions and expressions would be weighed upon the non-mutually exclusive standards of different groups, genders, ethnicities, identities and sects to determine whether it is deemed indecent or immoral one way or other.

Democratically elected government is the greatest threat to individual liberty. There exists an implied contract with the government, where we have voluntarily relinquished supreme power of policing and punishing, so that an order is maintained in everyday lives, and a line is drawn between personal and political, rights and duties, privilege and obligations. To institutionalize arbitrary control over individual expressions under the pretext of safety, morality, public decency and offended sensibilities of some weaklings, reeks of authoritarian government fantasies. This is where the lines are crossed, contract is breached and it’s no longer a fair play.

History defines greatness, probably, as a contribution. But we define greatness as retribution. Our state, its governments, its police machineries, bureaucracy, trade, industry, professionals, artists and citizens seem to have permanently established the foundations of their megalomaniac greatness in how successfully the critics were silenced. How their opinions of grandeur are validated and repeatedly validated, until it becomes the absolute truth. When there is no one left to disagree, there would be nothing to disagree. And there would be no more art, literature, culture, public policy to criticize, because they would all be great in themselves. This does not quite look like the social utopia we imagined. No wonder citizens are eagerly fleeing this country to migrate somewhere else, where they can’t even vote, to settle down, where at least they know their kids can enjoy the freedom on the foreign land, which they couldn’t in their home.

Because we have elected government, we also need to show them their rightful limits. This requires all libertarians, of those who are left in this country, to come together and unequivocally defend the individual rights to liberty, freedom and expression. We cannot let the police, or someone manipulating the government machineries, to decide which expressions are criminal, which opinions are unsayable, which ideas are beyond humor or ridicule. It is the road to totalitarianism. We have been there and lived it. We don’t want to repeat it.

Should the draft bill with provisions of harsh penalties and prison terms be passed, it will discourage professional journalism, while... Read More...

While dam construction is gaining pace, Nepal does not have dam safety legislation and policies to enforce effective dam safety... Read More...