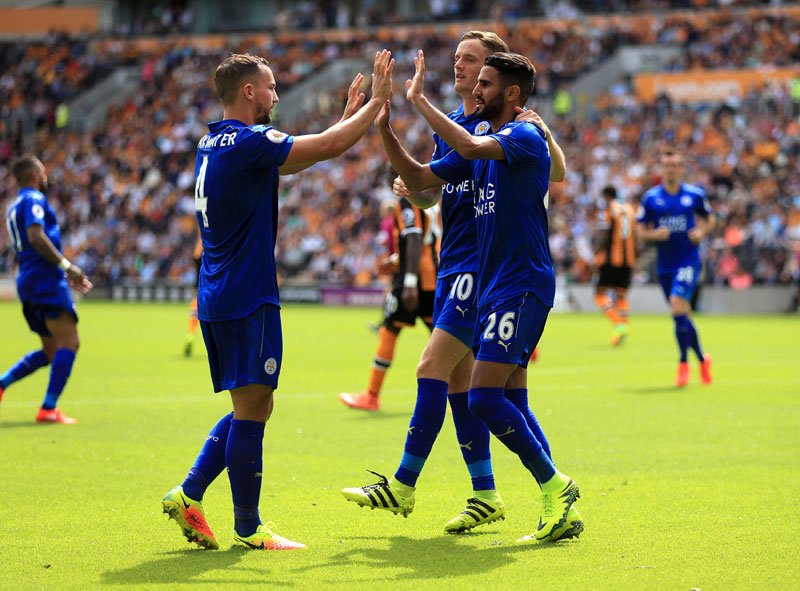 LONDON, Aug 18: When the English Premier League champions take on the runners-up, the stage should be set for a clash between two teams bursting with confidence.

That won't be the case when Leicester hosts Arsenal on Saturday.

Not after both teams slumped to embarrassing defeats on the opening weekend of the new season. Leicester manager Claudio Ranieri even talked about his team's target of avoiding relegation after a 2-1 loss to newly-promoted Hull, while Arsene Wenger conceded that his Arsenal side just wasn't ready for an opening match that ended in a 4-3 home defeat by Liverpool.

Along with the final score, a worrying aspect of Leicester's game was just how much Ranieri's defense lacked the protection of combative midfielder N'Golo Kante, who has joined Chelsea.

Having built last season's success largely on a counter-attacking game, Leicester also found it harder to change roles and take the game to its opponent.

"We need to put things right early, look forward to the next game and get a result there," captain Wes Morgan said. "We're at our home ground and we want to put on a good display."

There was better news off the pitch, though, with Leicester's announcement on Wednesday that Algeria playmaker Riyad Mahrez, a key figure alongside 24-goal Jamie Vardy in last season's title triumph, had signed a new contract through to 2020.

The King Power Stadium is already sold out for a game that will set Vardy, who squandered a series of chances at Hull, against the team he rejected following a transfer offer soon after the end of last season.

For their part, traveling Arsenal fans will be hoping that some of the first-team regulars who were rested against Liverpool — including center-half Laurent Koscielny — will be back in the side.

However, there will be no expectations of a repeat of their team's remarkable 5-2 victory in the Midlands last season.

Elsewhere, Liverpool heads for newly-promoted Burnley, while Chelsea is away to Watford after Antonio Conte celebrated his first league match as Blues manager with a home win over West Ham on Monday night.

The action starts early, with Manchester United at home to Southampton on Friday night.

Buoyed by his team's encouraging 3-1 win at Bournemouth, which included a debut league goal from Zlatan Ibrahimovic, Jose Mourinho takes charge for his first league game at Old Trafford.

However, the spotlight looks certain to fall on the return of midfielder Paul Pogba to United from Juventus for a world record fee of $116 million. Suspended for the game at Bournemouth following yellow cards collected in Italy, Pogba has declared himself fit after going all the way to the Euro 2016 final with France last month.

"You have to ask the manager, but I feel very good and have been training for 10 days. I am OK," Pogba told the Manchester Evening News on Wednesday. "I am quite used to this (busy summer). I played the World Cup two years ago when at Juve, and three years ago I was at the under-20s World Cup as well. So I am OK. It is about your body and I have been training on my holidays."

The team sheet for Manchester City before Saturday's game at Stoke will reveal if there has been yet more heartbreak for England's struggling goalkeeper, Joe Hart.

Dropped in favor of Willy Caballero for the win over Sunderland and then the midweek victory over Steaua Bucharest in the Champions League playoffs, Hart's future is already the subject of intense speculation.

New manager Pep Guardiola, who has also dropped City regulars Yaya Toure and Samir Nasri, wants a 'sweeper-keeper' who can play a supporting role outside the penalty area.

It's the latest setback for Hart, who was criticized during England's lackluster campaign at Euro 2016.

A right-thigh injury sustained by West Ham's record signing Andre Ayew in the loss to Chelsea has left the Ghana striker facing "a significant rehabilitation period," according to the club's head of medical and sports science, Stijn Vandenbroucke.

Ayew, who was signed for 20.5 million pounds ($26.75 million) from Premier League rival Swansea, had a scan on Wednesday. Vandenbroucke said the medical team would "assess the results with a leading consultant before drawing any conclusions."

However, Jack Sullivan, the son of West Ham joint-chairman David Sullivan, wrote on Twitter: "We are devastated that Ayew will be out for about 4 months. He needs surgery."

LONDON, Aug 14: Leicester began the defense of its English Premier League title with a shock 2-1 defeat at Hull,... Read More...