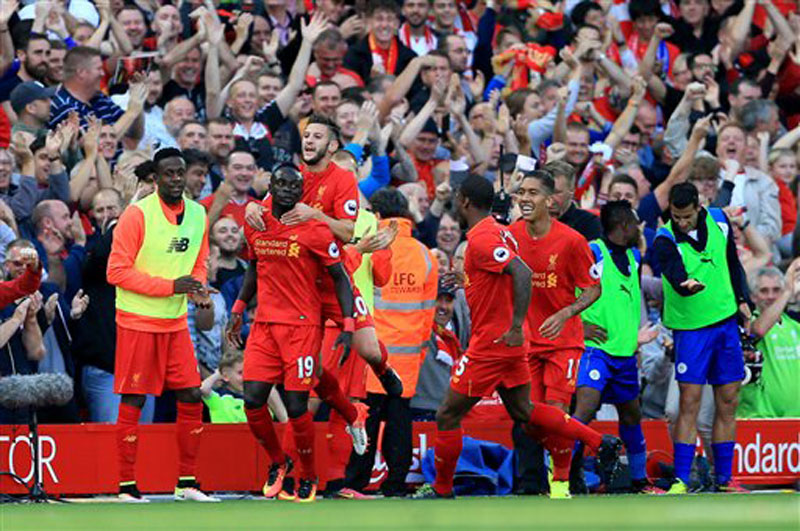 LIVERPOOL, Sept 11: Leicester's post-championship hangover continued as it lost to an impressive Liverpool 4-1 in the English Premier League on Saturday.

The Reds dominated for large parts, and took advantage of their early pressure to go 2-0 up half an hour in.

Roberto Firmino scored the first of his pair with a smart finish following a long pass from James Milner. The lead was doubled by Sadio Mane squeezing the ball in following a brilliant backheel assist from Daniel Sturridge.

A bizarre piece of play led to Leicester pulling one back before halftime. Lucas, used as a center back by manager Juergen Klopp, inadvertently passed the ball across his own goal to unmarked Leicester striker Jamie Vardy, who put the gift into the open goal.

This gave Leicester a bit of momentum, but the champion was unable to draw level, and soon found itself further behind.

Adam Lallana scored Liverpool's third, a thunderbolt from close range that gave Kasper Schmeichel no chance in the Leicester goal.

Firmino rounded off Liverpool's fine performance in the 89th, staying calm to slot home after a Schmeichel misjudgment.

Liverpool seems to be finding its feet, and Klopp will hope his team can put its past inconsistency behind it.

Prior infection, vaccines provide best protection from COVID
24 minutes ago

Westerly wind likely to cause rain, snowfall
54 minutes ago