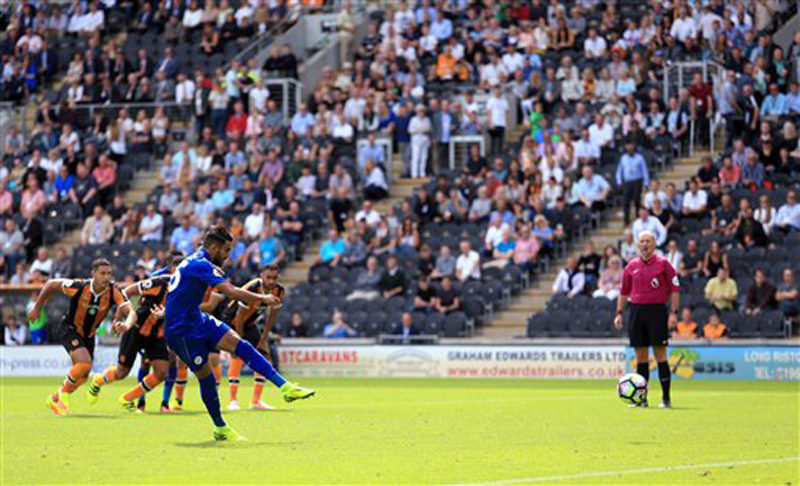 LONDON, Aug 14: Leicester began the defense of its English Premier League title with a shock 2-1 defeat at Hull, while Tottenham had to come from behind to draw 1-1 at Everton as the new season got underway on Saturday.

Having defied odds of 5,000-1 to win the league last season, the tables were turned on Leicester as the surprise champions lost to a newly-promoted club that was struggling with pre-season injuries and protests by fans against the owners.

Adama Diomande put Hull ahead in first-half stoppage time, Riyad Mahrez leveled from the penalty spot for Leicester just after the restart and Robert Snodgrass scored the winner in the 57th minute.

Two other matches finished 1-1, with Nathan Redmond scoring an equalizer on his Southampton debut against a Watford side that finished with 10 men, while a free kick from Swiss playmaker Xherdan Shaqiri earned Stoke a point against promoted Middlesbrough.

Leroy Fer scored a late winner as Swansea beat Burnley 1-0 at Turf Moor and a header from West Bromwich Albion's Salomon Rondon gave the visitors a 1-0 victory at Crystal Palace.

Manchester City, seen as title favorites this season under new manager Pep Guardiola, is at home to Sunderland in the day's late game.

Although Leicester has managed to keep all but one of its key players from last season — with combative midfielder N'Golo Kante moving to Chelsea — Claudio Ranieri's team lacked its usual bite and finishing.

England striker Jamie Vardy, whose 24 Premier League goals had propelled his team to the title, squandered a string of first-half chances.

Along with the missed opportunities, Ranieri said a lack of teamwork meant his team was second-best on the day.

"They played better, we tried to do our best," he told Sky Sports. "The effort was amazing, but individual effort - not as a team. And I think this is the key of the match."

Hull, with Mike Phelan in the role of caretaker manager after Steve Bruce left in July, had been struggling in the run-up to Saturday's match.

"A lot of the time it was fingers crossed to make sure that we had enough players to get out onto this field today," Phelan said.

"But all credit to the football players. They showed a lot of the determination."

Free WIFI in Everest Base Camp region
7 hours ago