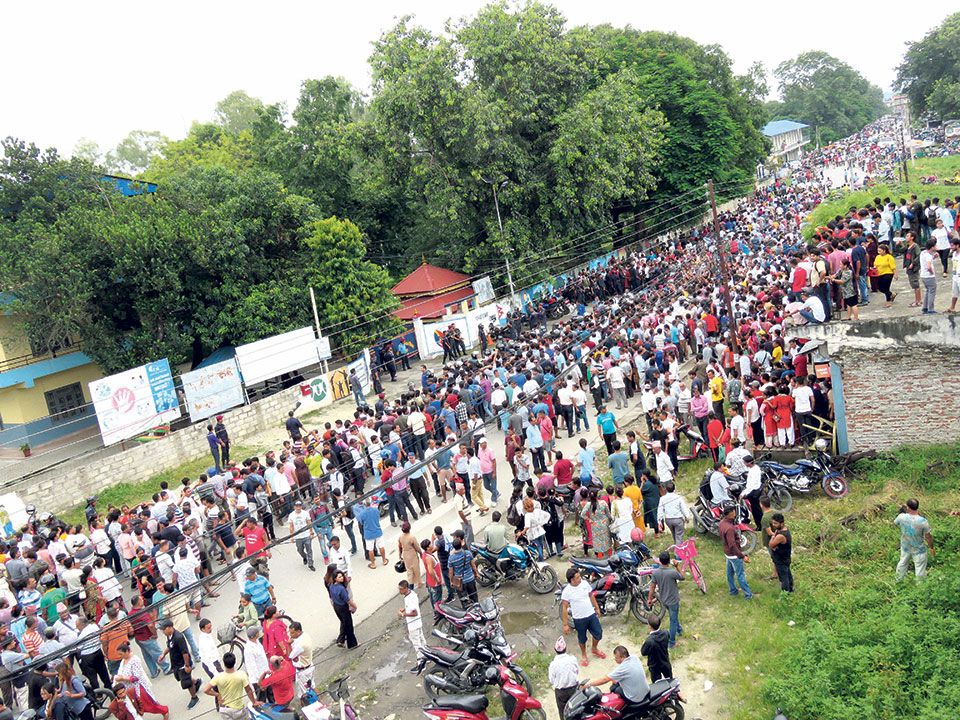 CHITWAN, Aug 17: Seven policemen sustained injuries as the fans of Rabi Lamichhane, a TV journalist who has been arrested in connection with the 'suicide' of journalist Salikram Pudasaini, clashed with the security personnel in Chitwan on Friday evening. According to Deputy Superintendent of Police (DSP) Ek Narayan Koirala, spokesperson for the District Police Office, Chitwan, four policemen sustained injuries in their legs while the remaining three on their hands.

DSP Koirala stated that the situation was under control in the day time but the demonstrators turned violent in the late hours. They started pelting stones and throwing iron rods at the police. They had gathered outside the police office from early morning and chanted slogans. Police had to fire tear gas shells to disperse the demonstrators.

Tension slowly escalated as the district court on Friday allowed police to keep three arrestees including Lamichhane in custody for five days for further investigation into the case. Lamichhane, journalist Yubaraj Kandel and a nurse from Okhaldunga Asmita Karki were arrested from Kathmandu on Thursday in connection with the case. In a video recorded before his death, which was leaked in the social media, Pudasaini claimed that he did not want to live any longer as he felt "excessively tortured" due to the three.

A single bench of Judge Binod Kumar Sharma of the district court allowed their detention for further investigation into the case. Pudasaini had worked closely with Lamichhane for a popular TV show 'Janatasanga Sidha Kura' telecast by News24. He had left the job and joined some other media just two months ago.

Soon after Pudasaini's video dragged him into controversy, Lamichhane pleaded innocence through facebook and twitter and also expressed his commitment to sincerely help the authorities in carrying out due investigation. Pudasaini, a local of Belkotgadhi Municipality – 3 of Nuwakot was found hanging at Hotel Kangaru of Chitwan on 5 August. Though his family members had earlier refused to receive his dead body claiming it to be a murder, they accepted it later as the video found in his mobile left them in a confusion. Lamichhane, who had instantly expressed grief over the untimely demise of Pudasaini on social media, had attended Pudasaini's funeral as well.

Thanks to 'Janatasanga Sidha Kura', Lamichhane has a huge fan following in and outside the country. While the masses seem busy in guesswork whether there could be Lamichhane's involvement as their facebook and twitter posts reflect, many have however urged everyone not to make it another 'Nirmala case' where the mass sentiment apparently affected the direction of investigation.

Lamichhane and Kandel were arrested by the teams of Kathmandu and Chitwan Police from the office of News24 on Thursday evening while Karki was arrested the same day in the afternoon. They were brought to Chitwan in the night.

Even in the morning, police took five of the demonstrators under control for trying to block the road at Chaubiskothi of Bharatpur Metropolis – 10 near the police office. They were released after some time.

CHITWAN, Aug 18: Friends and families of journalist Salikram Pudasaini who was found hanging in Kangaru Hotel of Chitwan on... Read More...