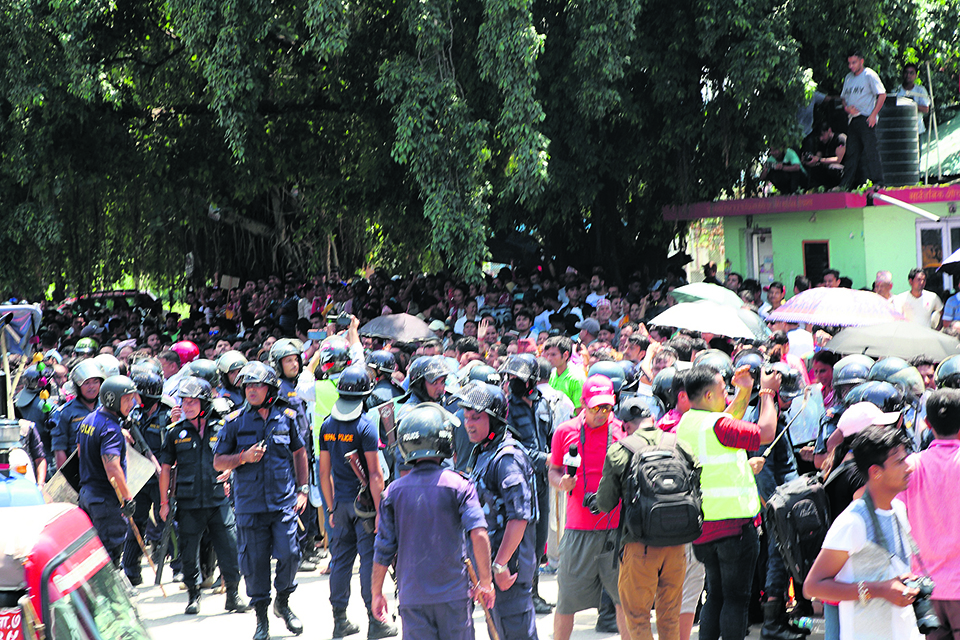 Lamichhane supporters continue to protest for his release

CHITWAN, Aug 20: As the fans of TV journalist Rabi Lamichhane, who is in police custody in connection with the controversial suicide of his former colleague Salikram Pudasaini, continue to demonstrate in Chitwan demanding his immediate release, various political parties on Monday expressed their commitment to help the administration for free and fair investigation into the case.

The parties stated that nobody should put pressure for or against the process of investigation. Speaking at a meeting chaired by the acting CDO of Chitwan, Janakraj Panta, the members stressed for a high level investigation "as the death of Pudasaini is suspicious."

Lamichhane fans continued with their demonstration in Chitwan on the third consecutive day on Monday from early in the morning. Just like on the previous two days, they clashed with the police during the protest. They even tried to halt traffic movement on the east-west highway, which the police did not let happen. They were dispersed using batons. Terming it as a sensitive zone, the district administration has declared the bypass road from Chaubiskothi to the Customs Office as a 'no protest' zone. There is a hospital around.

Meanwhile, Nepali Congress (NC) leaders have cautioned the government to handle the case with due sensitivity. In a press statement, the NC has stated that 'the government's lost credibility will further erode if it fails to give justice to the family or book the real culprit in the case'.

Pudasaini, who worked closely with Lamichhane for a popular TV show on News24 'Janatasanga Sidha Kura' was found hanging at hotel Kangaru of Chitwan 13 days ago on 5 August. After completing death rituals of 13 days, his widow filed A case against three persons - Lamichhane, Yubaraj Kandel and Asmita Karki who were accused by the deceased as those inciting him to kill himself in a video recording recovered by police. In view of the sensitivity of the case, a team from the Central Investigation Bureau of Nepal Police has also landed in Chitwan to intensify the investigation.