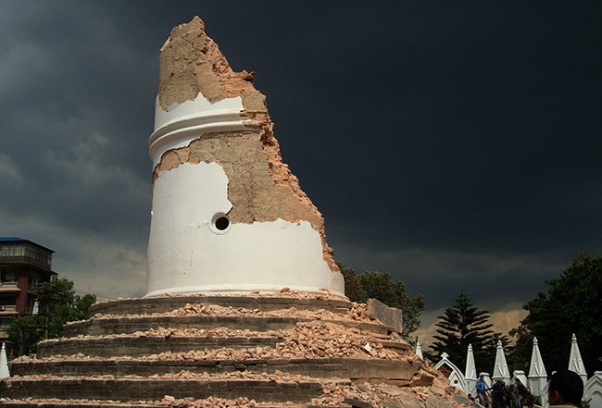 KATHMANDU, May 10: Two weeks after the prime minister lashed out at concerned authorities for the delay in the reconstruction of the Dharahara tower, the National Reconstruction Authority (NRA) has given a 15-day deadline to the Kathmandu Metropolitan City office to vacate all its rental properties in the periphery of Dharahara.

NRA Chief Executive Officer Yuba Raj Bhusal summoned KMC Mayor Bidya Sundar Shakya to his office on Wednesday and asked him to vacate all the rental properties from the Dharahara area within the next 15 days.

According to NRA officials, the move is aimed at clearing the Dharahara area to kick-start the long-pending reconstruction of Dharahara, which is also known as Bhimsen Tower.

Similarly, the NRA has also asked the metropolitan body to impose ban on the construction of new structures around the Dharahara area and also issue a stop-work order for structures that are under construction in the area.

“If needed, the local administration will assist the KMC to vacate the rented properties,” he added.
NT had pulled out of the tower reconstruction pledge due to dillydallying by the concerned authorities to clear the tower area and resolve other technical hurdles required for reconstruction.
CEO Bhusal also held talks with representatives of the Department of Archeology and Guthi Corporation on Wednesday.

CEO Bhusal also directed the Guthi Corporation to terminate the land lease agreements if it has signed with any individual or company and provide the land for Dharahara area expansion.

Over 50 people had died in the tower. It has also decided to expand the area of the tower area and develop a park. For that, it has even decided to shift the existing Post Office and the Mint Department.

CEO Bhusal also said that the NRA will ask the Ministry of Information and Communications and the Nepal Rastra Bank to shift their offices from the Dharahara area.

KANCHANPUR, April 30: A massive fire that started three days ago in Kanchanpur district continues to take toll on the... Read More...