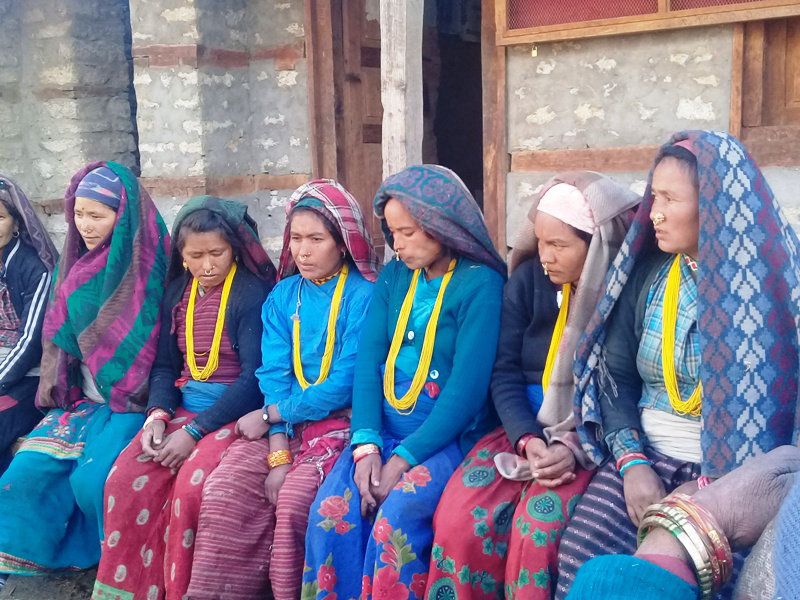 Group of expecting mothers wait for checkup at a birthing center in Jumla in this recent picture. DB Budda/Republica

JUMLA, Dec 14: Raju Rokaya has two children. Both were born at home. A resident of the Tila Rural Municipality, she states that having delivery services nearby remains a far-fetched dream for the people like her. “We don’t have even a health post here, let alone birthing centers,” she said.

“Not just me, all women give birth to babies without any expert’s help at their home. Nothing has changed for us in terms of development,” Rokaya added.
Rokaya’s neighbor Debu Rokaya also lamented the sorry state of health services in their area.

Women would appreciate the facility to deliver their babies in the birthing center under the medical supervision of trained doctors and equipment, but that is not available here, she said.

“Let alone birthing centers, we face a lot of hassles even for a regular health check-up during pregnancy,” Debu said. “Women would feel safe if there was the birthing center in our area,” she added.

Debu and Raju complained that in lack of birthing centers in their area, women are not getting an even maternal allowance.

Due to its remoteness and the apparent lack of transportation, people of the district are deprived of all government facilities, they said.

Women of this and other rural municipalities that don’t have birthing center facilities, give birth to their babies at home and it is common for them to face health complications.

Excessive bleeding is one of the most heard complications that women in this area face during delivery. Even during emergency most of them are not taken to health care centers due to the lack of proper roads.

In cases of emergency, chartering helicopters is the only option for women in this area. But, residents lament that the dependency on helicopter costs them too much.

“Helicopter is the only option we have during medical emergencies. Sometimes even that is not available,” noted Debu. Chartering a helicopter, Debu shared, deprives the family of even basic things.

Though they manage to get the required medical attention to their loved ones, the family has to compromise even with their daily needs to pay off the helicopter fare.

“Many children die here in lack medical services. And in many cases, mothers have lost their lives,” she shared.

Some birthing centers were established across the district a few years ago. However, they are still far from sufficient, as most of the settlements find it very time to consume to reach there. In case of Tila, the nearest birthing center is eight hours walk.

Carrying a pregnant woman on a stretcher over steep slopes and cliffs is very risky for the villagers.

“Even if the villagers want to do so, we don’t have a stretcher. We use doko (bamboo basket) to carry the patient. But that too is risky,” Debu said.

Harka Rokaya, another resident of the area, said he has never heard or seen any woman in the locality taken to the birthing center for delivering the baby.  “I have never known of any woman who delivered her baby at a birthing center so far. For rural women, it’s a dream,” he said.

SIRAHA, Feb 13: The Nepali people living in areas near the country's borders are deprived of various state services and privileges.... Read More...

JUMLA, Dec 29: Laulunath Yogi of Tila-9, Rawatwada in Jumla is a renowned shaman of his village. Few months ago, he... Read More...

Two dead, 37 injured in bus accident in Hetauda
5 minutes ago
Car goes missing after falling into Trishuli
9 minutes ago