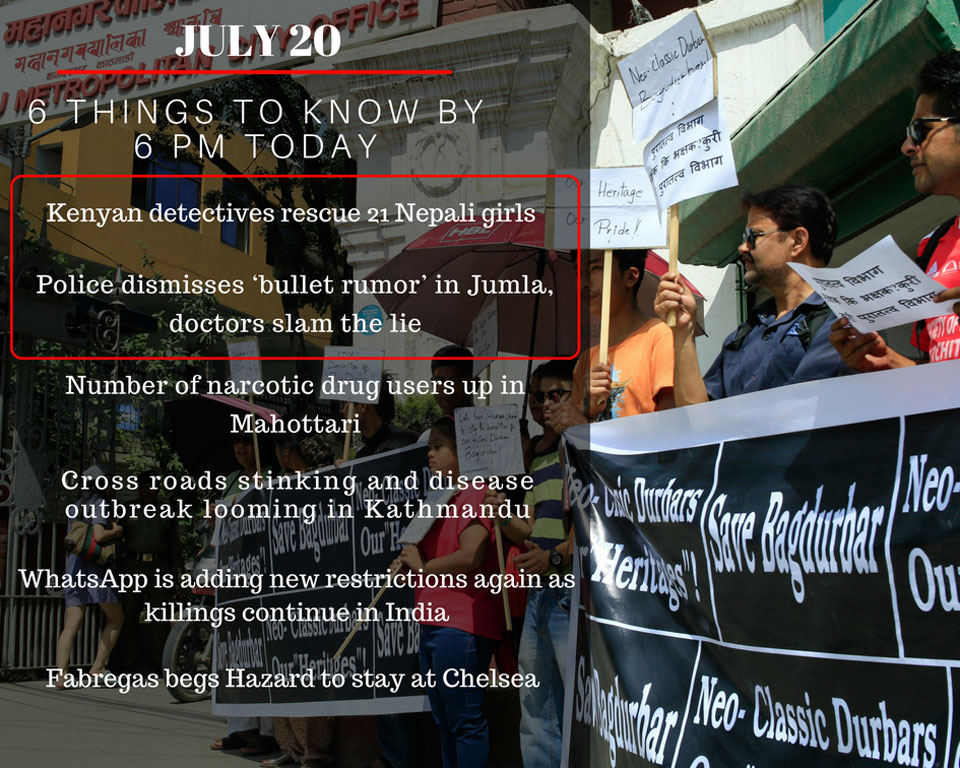 The Directorate of Criminal Investigations of Kenya rescued 21 Nepali girls who were working illegally in two famous strip clubs of Westlands in Nairobi, Kenya. Detectives raided the two strip clubs yesterday night where they also arrested three perpetrators who will be charged for various offences under The Counter-Trafficking in Persons Act (Act No.8 of 2010).”

The number of narcotic drug users is increasing in Mahottari, according to the district police office.  According to statistics, the cases surged from 25 last year to 45 this year.  Majority of the drug users were between 15 to 30 years of age.

Solid wastes dumped at road intersections have started to reek, thereby increasing probability of spread of diseases in Kathmandu Metropolitan City.  Doctors have warned of an outbreak of diseases like cholera, typhoid and respiratory ailment if the solid waste was not immediately removed. Kathmandu Metropolitan City has not been able to manage the city waste as the road leading to the dumping site at Sisdole remains obstructed due to flooding following the recent incessant rains. Around 500 metric tonnes solid waste a day is generated in Kathmandu alone at present.

In desperate efforts to end mob lynching in India, WhatsApp is adding new a restriction again as killings in its biggest market goes unabated.  In its new attempt, WhatsApp aims to limit forwarding messages. This is the third major attempt by the company in three weeks to stop fake rumors from spreading on its platform.

Chelsea midfielder Cesc Fabregas has urged team mate Eden Hazard not to leave the Premier League club amid reports that the Belgium forward is bound for Real Madrid. During the World Cup in Russia, Hazard revealed he was considering leaving the club he had joined in 2012.