The approach of controlling floods and landslides is being carried out continuously, however gaps between research, government agencies, and local people’s expectations are legitimate reasons for facing yearly losses in the disaster-prone areas.

Floods and landslides are one of the most towering and revenant natural disasters in Nepal. With the onset of monsoon, the country receives heavy rainfall leading to numerous landslides and floods at various locations each year. This results in the loss of human lives and the damage of infrastructures, including hydropower plants, irrigation projects, commercial and public buildings, and many more. According to the National Disaster Risk Reduction and Management Authority (NDRRMA), the Ministry of Home Affairs (MoHA) database, landslide and flood events induced by heavy rainfall have caused a total number of 2,119 deaths and an estimated economic loss of Rs 18.86 billion (approx.), respectively. Following similar events, the monsoon this year escalated with flooding with consequent landslides in Melamchi/Helambu, Mustang, and various locations in the country. The situation in Melamchi (Bhotekoshi-Sukhoshi basin) worsened with flash floods and mudflow due to the cascade effect of the Landslide Dam Outburst Flood killing 11 people with 25 missing and a huge economic loss. The question raised is why the country receives frequent floods and landslides annually and what needs to be done to minimize the consequences of these disasters. Figure 1 provides a conceptual image of causes, consequences, and possible ways to minimize the impact of floods and landslides in Nepal. 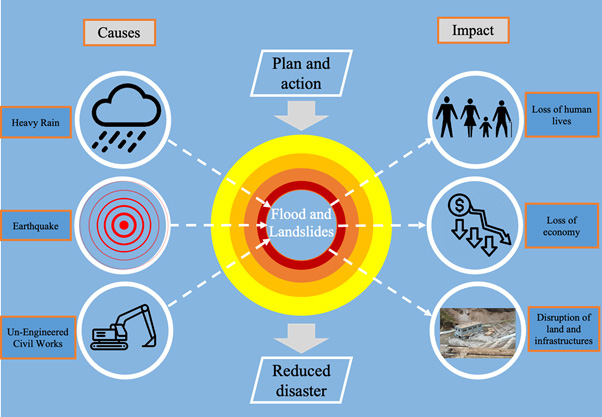 At the first glance, both natural and human-induced activities are responsible for landslides and floods in Nepal. Since, Nepal lies on the lap of the Himalayas, which are the young mountains that are tectonically active with fragile geological structures. Natural activities such as erosion process, pore water pressure, and the geological conditions are considered one of the major drivers that induce landslides; for example, repeated earthquakes have destabilized the rock mass which has loosened the soil of the mountains. The google image taken after 2015 shows the concentration of the earthquake triggered landslides in the upstream of the Indrawati area. Prior to the unstable soil, the heavy monsoon dominated surface runoff scouring the soil eventually blocked the Indrawati River upstream damming the course of the river.

Meanwhile, the country receives more than 80% of the total rain during the monsoon season (June-September) only. According to the Department of Hydrology and Meteorology (DHM), a governing body to record climate data, Nepal received an annual average rainfall of 271.4 mm in Jumla to 3900.2 mm in Pokhara during 1980-2010. The rainfall is dominated by the presence of monsoon circulation and its interaction with topography. The central mid mountain region that holds the Annapurna range receives a maximum average annual rainfall of 5400mm. Besides this, one-day and five-day extreme rainfalls are also dominant with a rising trend in the central mid mountain regions. Heavy rainfall days and very heavy rainfall days are more witnessed in central east mid highland to east highlands. The high intensity rainfall over a short duration is responsible for loosening the landmass structure resulting in landslide events in the mountains. For example, with heavy rainfall on June 15th in the Indrawati River basin damaged many of the public and private buildings, killing seven people. The incessant rain over the night might be one reason for the flooding.

According to DHM, the observed rainfall in the basin area was recorded to be 75-100mm in 24 hours. If explored on a small scale, the Melamchi area has experienced small floods in the past years while the thick detrital deposits following flash flood was new to the area (Figure 2). However, according to geological studies, sediment distribution from the riverbank of the Melamchi area supports the theory of such detrital deposits following floods 100 years ago. Besides these natural phenomena, human-induced activities such as mining, tunneling, deforestation, un-engineered civil engineering works etc. are also considered major factors that ignited the landslides.

According to the NDRRMA, floods and landslides are the major disasters leading to a huge loss of lives and negative impacts on the economy following earthquakes. Figure 3 shows the statistical data on the death and missing of the total number of people from floods, heavy rainfalls, landslides, and flash floods as well as an estimated economic loss in billion Nepalese rupees. In 2014, the Jure landslide was responsible for the death of 156 people and a loss of approximately five million Nepalese rupees and a full stop to rehabilitate the area. This year, observing the preliminary damages, Melamchi is expected to mark one of the highest economic losses incurred by natural disasters in the country as the settlement area, agricultural land, and other infrastructures will call for huge investments for its recovery. 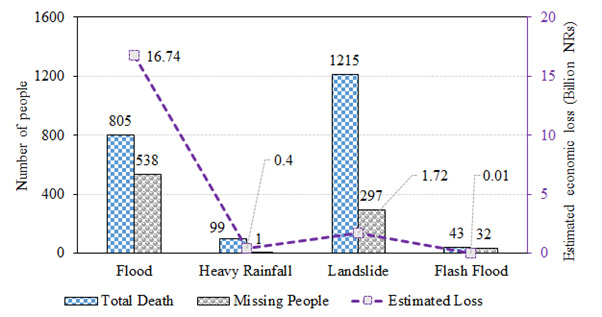 The approach of controlling floods and landslides is being carried out continuously, however gaps between research, government agencies, and local people’s expectations are legitimate reasons for facing yearly losses in the disaster-prone areas. Meanwhile, hazard and susceptibility maps are published while the imposition of the studies-based implications is yet another major challenge in the country. In addition, timely reallocation of the local communities in the probable areas to be affected prior to disasters aids disputes. The best way to avoid landslides and floods in the future is to not live in a place with a long history of disasters, which is however quite difficult to imply.

The loss, both human and economic, incurred by floods and landslides, needs to be minimized through the integration of structural and non-structural approaches. The structural approach includes modifying the slope geometry, installation of retaining walls, grouting the rock joints and fractures, diverting debris pathways, maintaining vegetation depending on the slope to retain the soil, rerouting surface and underwater drainage. On the other hand, a non-structural approach includes implementation of appropriate plans and policies for disaster preparedness. Formulation and modification of the existing disaster response laws in the case of both disaster-prone areas and unpredicted areas by establishing necessary disaster prevention measures, and clarifying the roles of authorities and individuals helps smoothen action before and after the disaster. Additionally, increment of funding in research activities, investment in disaster resilient landscapes and infrastructures, and reducing carbon emission might support in minimizing the floods and landslides which eventually helps in reducing human and economic losses.

(The authors are post-doc researchers at the University of Yamanashi, Japan.)

BIRENDRANAGAR, Sept 1: Floods and landslides displaced a total of 1045 families in Panchapuri, Birendranagar, Bheriganga, and Barahatal areas in... Read More...

KATHMANDU, July 27: Floods and landslides have swept across various parts of the country, leaving at least 37 people dead in... Read More...

Gold price up by Rs 200 per tola, silver price remains stable
10 minutes ago

Light to moderate rain forecast for today
13 minutes ago