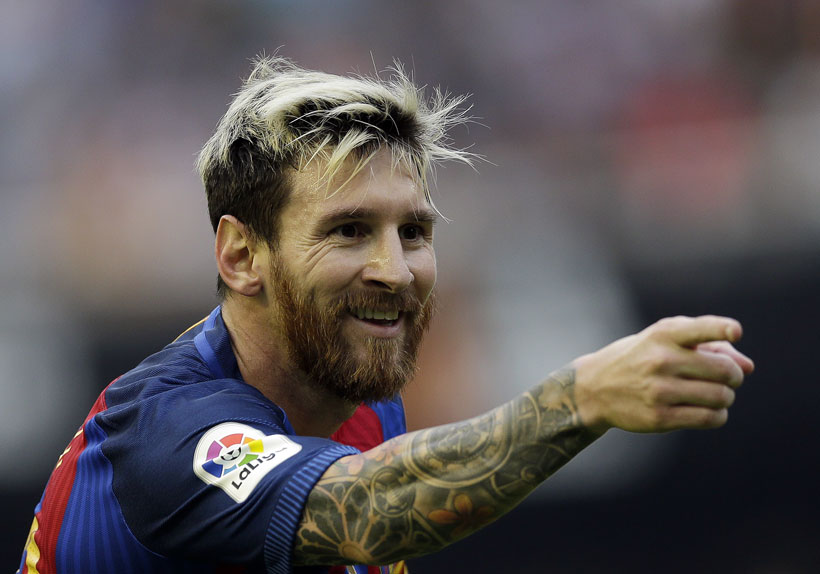 The hotly contested game was marred both by Enzo Perez's tackle that forced Iniesta off on a stretcher and a fan throwing a water bottle at Barcelona's players while they celebrated Messi's winner. The bottle appeared to strike Neymar's head and also impact other Barcelona players when it was tossed into their tight huddle.

The defending champions rose to the top of the Spanish league. Barcelona is one point ahead of Atletico Madrid and Real Madrid before they play their matches on Sunday.

The victory, however, came at a high price: An injury that will sideline Barcelona's captain and key playmaker for at least six weeks.

Iniesta clutched his right knee and called out for help from the team doctors when he was cut down by Perez in the 12th minute.

"The worst news is Iniesta's injury," Barcelona coach Luis Enrique said. "But the team showed the desire it has. How we won says a lot about the spirit and character of this team."

Iniesta's knee appeared to buckle when he was hit by Perez's aggressive tackle. He was clearly in pain and held a hand over his face when he was put on the stretcher and carried off. Ivan Rakitic replaced him.

The club issued a medical report saying Iniesta injured a ligament in his right knee, and the 32-year-old World Cup winner will be sidelined "for six to eight weeks."

Messi opened the scoring and had the last word of the wild match when he beat Diego Alves with a well-taken penalty kick that slid just between the diving goalkeeper and the post.

Messi rifled in his first goal from the edge of the area.

Valencia rallied to take the lead on goals by Munir El Haddadi, who is on loan from Barcelona, and Rodrigo Moreno early in the second half before Luis Suarez scored to make it 2-2 in the 62nd.

Messi then snatched the win from the penalty spot with 90 minutes complete after he passed the ball to Suarez, who was fouled by Aymen Abdennour in the box.

Diego Alves, an expert penalty stopper, tried to psyche Messi out by talking to him before he took his kick. But with the pressure on, Messi coolly converted his chance, and his 19th goal in 21 career matches against Valencia.

Messi's goals took his league-leading tally to eight. They were his fifth and sixth goals in three matches since returning from a three-week hiatus while recovering from a right groin strain. He scored a hat trick to lead a 4-0 victory over Manchester City on Wednesday in the Champions League.

It was the first loss in two matches for Valencia's Italian coach Cesare Prandelli.

"It was a very complicated game physically speaking, very aggressive," Prandelli said. "But we were playing against one of the best teams in the world. I'm proud of our effort."

Espanyol scored three times in the final half hour to roar back from a three-goal deficit and secure a draw. Leo Baptistao scored from distance in stoppage time to complete the comeback.

Real Sociedad crushed Alaves in a Basque Country derby to leapfrog the visitors in the standings.

The third consecutive home victory for Sociedad included a great solo goal by Willian Jose, along with strikes from Xabi Prieto and Carlos Vela.

Granada and Sporting Gijon remained in the relegation zone after their scoreless stalemate. Granada is the only team in the top division yet to win this season.

Bishwa Prakash's question to Oli: When will you get rid of 'Congress phobia'?
44 minutes ago