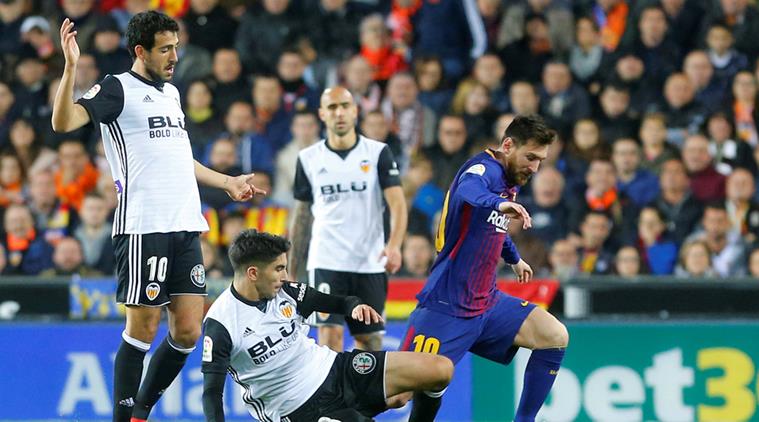 VALENCIA, Nov 27: Barcelona’s Jordi Alba haunted his former club Valencia with a stunning late equalizer in a 1-1 draw on Sunday in a top-of-the-table Liga clash that preserved the Catalan side’s four-point lead but was overshadowed by a ‘goal’ that was not given.

Barca were denied the opener as Lionel Messi’s tame shot after half an hour was spilled by goalkeeper Neto and bounced over the line before the Brazilian dragged it back over but referee Ignacio Iglesias Villanueva allowed play to continue.

The Argentine forward and his teammates remonstrated with the officials to no avail but still had a big say in the game, laying on a perfect pass for Alba’s 82nd-minute leveler.

Spain striker Rodrigo Moreno put Valencia ahead on the hour, sneaking ahead of Barca defender Thomas Vermaelen to score from close range before putting on an orange wig in tribute to the club’s late president Jaume Orti who passed away on Friday.

Barcelona leads the standings with 35 points, Valencia has 31 while Atletico Madrid are third on 27, level on points with fourth-placed champions Real Madrid.

“It was a good game and it was defined by a controversial play but we know Valencia’s potential. We’re not satisfied with everything but we’ve managed to take something positive from the game,” Barca coach Ernesto Valverde said.

Valencia assistant coach Ruben Urria added: ”We struggled at first because Barcelona are a great team and came here to win against the second-best team in the league.

“Everything changed in the second half and we were the better team. These players are making history.”

Before kick off, Valencia paid tribute to Orti, president during the club’s last two Liga title-winning seasons in 2002 and 2004, and an electric atmosphere gripped The Mestalla

Marcelino’s revitalized Valencia side were searching for a ninth consecutive league win to cement their first title tilt in 14 seasons but Barca took command in the first half, puncturing the atmosphere with long periods of possession.

Still, the leaders failed to create any clear chances until the game’s flashpoint when Messi celebrated his ‘goal’ only for Valencia to break straight down the other end and almost open the scoring when Simone Zaza flashed a shot just wide.

La Liga is the only one of Europe’s top five leagues not to have goal-line technology, although it will implement the video assistant referee (VAR) system from the start of next season.

“La Liga has the best players in the world. It’s the best league in the world and it deserves the best technology. The goal was over the line, but neither the referee nor the assistant saw it,” said Barca midfielder Sergio Busquets.

Valencia grew in confidence after the break, pressing high up the pitch. Zaza shot wide again and Barca defender Nelson Semedo gifted the ball to Rodrigo, who failed to capitalize.

The striker found the target soon after, poking home to complete a sweeping move between left-back Jose Gaya and winger Goncalo Guedes, putting Valencia on course for a first home win over Barca in over a decade until Alba struck.

Zaza could have struck a winning goal deep in added time but his shot bounced over the bar.

Elsewhere, Sevilla battled back from two goals down to win 3-2 at Villarreal in the first game since the news that coach Eduardo Berizzo has prostate cancer. Fifth-placed Sevilla have 25 points and are now four ahead of Villarreal in sixth.

Suarez grabs leveler for Barca after goalline controversy at Betis

Barcelona's title hopes were dented as they drew 1-1 at Real Betis on Sunday in a game shrouded in controversy... Read More...